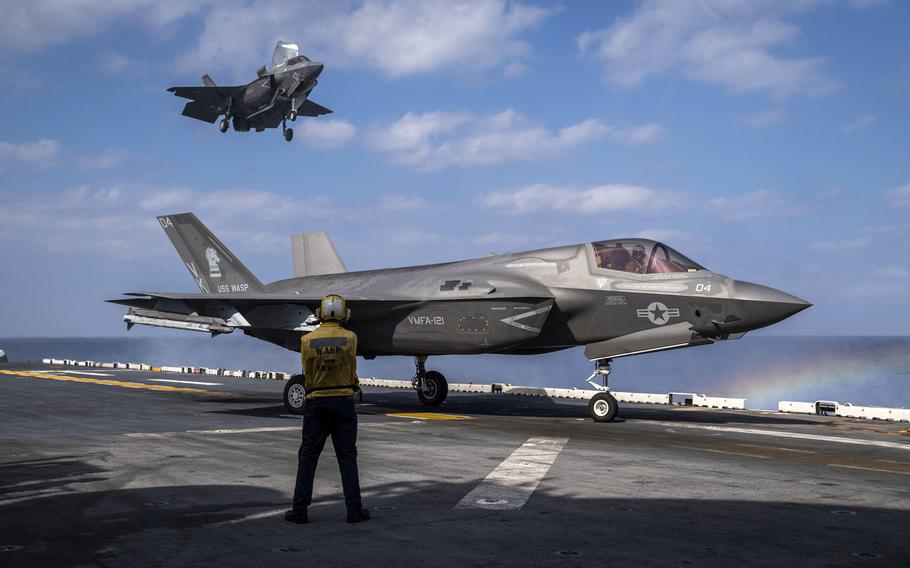 An F-35B Lightning II aircraft prepares to land behind another F-35B on the flight deck of the amphibious assault ship USS Wasp during operations in the Philippine Sea, Feb. 2, 2019. A shortage of spare parts in the F-35 supply chain has reduced the jet?s mission readiness, a government watchdog has found. Sarah Myers/U.S. Navy (Sarah Myers/U.S. Navy)

A shortage of spare parts and difficulty managing and moving parts around the world kept the F-35 grounded 30% of the time during an eight-month period last year, a new watchdog report found, with some training units unable to fly most of that time.

A backlog of repairs and high rates in some units of “cannibalizing” parts from other planes rather than waiting for parts to arrive also contributed to the fighter jet program’s problems, the Government Accountability Office said in a report released Thursday.

Earlier on Thursday, the Pentagon Inspector General had cleared Acting Defense Secretary Patrick Shanahan of wrongdoing in allegations that he had used his official position to favor his former employer, Boeing Co., including claims that he had “repeatedly dumped” on the F-35 jet and called the Lockheed Martin-produced aircraft “f---ed up.”

Investigators found his comments were directed at the program and its performance, not the aircraft, “and were consistent with other comments about problems in the F-35 program made by other senior DoD officials,” the IG said.

Beyond supply and repair problems, the GAO report found that while spending billions of dollars on F-35 spare parts, the Defense Department does not have records for all its purchases, know where parts are located or how much the military services paid for them.

Such lack of accountability, GAO said, will make it more difficult to rein in costs of the Pentagon’s most expensive weapons program, with sustainment costs estimated at $1.12 trillion for the U.S. alone, the report said.

The GAO bluntly warned the Pentagon that if it doesn’t fix the program’s supply and maintenance challenges, the “F-35 fleet may fall short of the capability needed to support its critical national defense missions in the future.”

Between May and November 2018, F-35 mission-capable rates worldwide — the percentage of time aircraft with squadrons are safe to fly and able to perform at least one mission — hovered around 50%, according to data reviewed by GAO.

About 27% were fully mission capable — able to perform all tasked missions — during the same period, the report said.

The report also exposed serious flaws in the Pentagon’s efforts to establish an effective and accountable F-35 supply chain, which GAO reviewed between January 2018 and April 2019 at Congress’s request.

Rather than owning the spare parts outright, the Air Force, Navy and Marine Corps, along with eight international partners and other foreign military sales customers, share a common global pool of parts, managed by Lockheed Martin, the primary contractor.

The idea is to share support, including spare parts, depot maintenance and training, through a network of sites and suppliers. But the supply chain lacks spare parts and the aircraft were unable to fly nearly 30% of the time, Lockheed Martin data for May to November 2018 revealed.

Pentagon officials were trying to reduce shortages by identifying which parts were affecting aircraft capability the most and then working to increase the quantity and reliability of those parts, they told GAO.

For example, coating on the F-35 canopy for stealth failed more frequently than expected and the manufacturer could not produce enough canopies to meet demand, the report said.

The aircraft’s supply chain is also hampered by a limited capacity to repair parts, GAO said, after finding a backlog of about 4,300 spare parts awaiting repair at depots or the manufacturer.

To keep their F-35s flying, some squadrons have resorted to taking parts from other grounded aircraft at rates six times higher than the service target, GAO found.

“These high rates of cannibalization mask even greater parts shortages because personnel at F-35 squadrons are pulling parts off of other aircraft that are already unable to fly instead of waiting for new parts,” GAO said.

GAO called on the Pentagon to review the F-35 supply chain and consider adjusting quantities of parts it procures or developing methods to make parts more readily available.

After depending largely on Lockheed to manage the F-35 supply chain and to support their operations, the Pentagon and the military services have grown dissatisfied with the program’s inability to meet their requirements and reduce costs, GAO noted. Now they are considering “the potential for a significant shift in DOD’s F-35 sustainment strategy,” the report said.