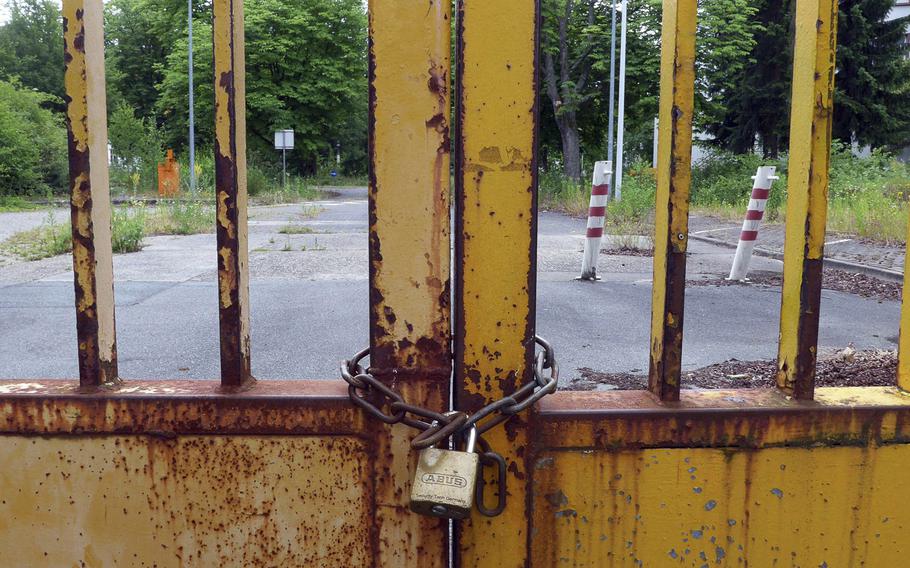 A locked gate bars entry to a former U.S. base in Darmstadt, Germany. (Michael Abrams/Stars and Stripes)

WASHINGTON — A bipartisan group of policy experts issued an open letter Monday urging members of Congress to drop their opposition to what would be the first round of base realignments and closures in more than a decade, saying it could save billions of Pentagon dollars and offset spending on other military needs.

The call comes just weeks after President Donald Trump released his 2018 proposed spending plan that called for a new round of base or facility shutdowns to trim excess overhead. The document urges Congressional approval for a base realignment and closure, or BRAC, in fiscal year 2021.

No BRAC has been enacted since 2005. A new round is currently barred by law, with lawmakers fearing potential economic harm to their communities.

“It is understandable that discussions about closing military facilities can be controversial,” said the letter, signed by 45 experts from think tanks including Cato Institute, Center for American Progress, Center for Strategic and International Studies, Center for a New American Security, Brookings Institution and Concerned Veterans for America.

“To be sure, the closing of a military base is disruptive to surrounding communities,” it said. “Evidence shows, however, that most communities recover and some do quite rapidly.”

The Pentagon has been insistent that another round of BRAC is necessary, and says it will have more than 22 percent excess infrastructure by 2019. The Army carries the greatest excess overhead at 33 percent, and the Air Force has 32 percent, according to a recent Pentagon review. The Navy and Marine Corps overage is at 7 percent.

“I recognize the careful deliberation that members must exercise in considering this,” Mattis said. “But BRAC is one of the most successful and significant efficiency programs we have.”

The letter noted that the surplus projections are not based on military personnel cuts that Trump appears to be reversing, and said that even if Trump builds up personnel to levels he stated during the campaign, the Pentagon will have more overhead than it needs “well into the 2020s.”

The biggest obstacle is political will, and the letter’s authors say they perceive a melting of hardline posture on the issue. Sens. John McCain, R-Ariz., and Jack Reed, D-R.I., the chairman and ranking member of the Senate Armed Services Committee, said in January that they were amenable to examining the potential savings of a BRAC round. Rep. Adam Smith, D-Wash., the top Democrat on the House Armed Services Committee, has reintroduced legislation to allow the Pentagon to close excess bases.

That new will, combined with the Pentagon’s struggle to keep its forces trained and ready and its equipment well-maintained under budget shortfalls and increased global demand, gave the authors impetus to issue the call, said Chris Preble, vice president for defense and foreign policy at the Cato Institute, a Libertarian think tank in Washington. Preble co-authored the letter with Todd Harrison, director of defense budget analysis at the centrist Center for Strategic and International Studies and Mackenzie Eaglen at the conservative American Enterprise Institute.

“They are shifting resources and are forced to spend on excess overhead which is frustrating to them,” he said. “Congress is compelling the military to allocate resources in places where the military says are not needed. It’s a problem and I think a number of members of Congress are troubled by that.”

Still, BRAC is not a popular action among many lawmakers – particularly in military regions. In a hearing of Senate Armed Services Subcommittee on Readiness and Management Support in February, chairman Jim Inhofe (R-Okla.), said he supported added spending for defense but remained opposed to another BRAC round.

“Our first priority must be rebuilding the force and its readiness,” Inhofe said. “This will require additional funding that we cannot afford to spend on another BRAC. We must also understand what our future force structure will look like—its size and composition, how it will train, and the infrastructure required to sustain it—before we consider another BRAC round.”

Preble urged lawmakers to look at how communities that underwent BRACs have fared.

There have been five rounds of BRAC starting in 1988, the most recent and most costly in 2005. The letter stated that the initial Pentagon costs of BRAC are high, but those are offset by savings that last for years. In 1990, the Pentagon’s first year of savings was ed $72 million, but by 1995, the savings had reached $1.5 billion annually. The second round climbed to $3.4 billion annually and the others followed suit, the letter said.

“Today, the first four BRAC rounds together are producing annual recurring savings of around $7 billion,” the letter said, noting that even the last BRAC, which was the costliest and focused more on realignment of functions than on closing bases, is producing $5 billion in annual savings.

“Congress has blocked closures here at home for over a decade,” the letter said. “The military has been forced to allocate resources away from the training and equipping of our soldiers and toward maintaining unneeded and unwanted infrastructure.

“Meanwhile, many tens of billions of taxpayer dollars have been wasted,” the letter added. “The time to act is now.”