Planking is in, situps out for Navy physical readiness test 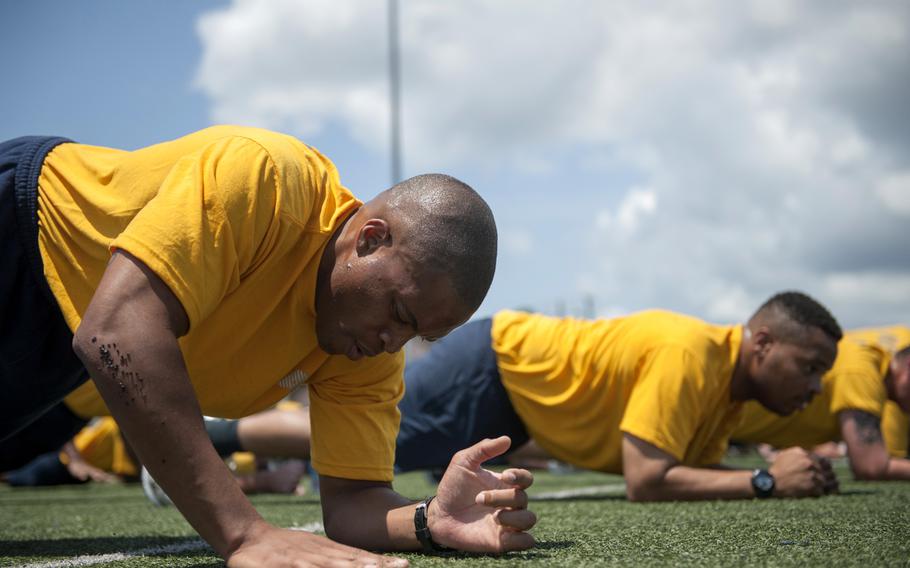 Sailors aboard the aircraft carrier USS Abraham Lincoln perform planks during command physical training July 2015. The Navy announced it will do away with situps for Navy physical readiness tests, replacing them with a plank exercise. (Ciarra C. Thibodeaux/U.S. Navy)

Sailors aboard the aircraft carrier USS Abraham Lincoln perform planks during command physical training July 2015. The Navy announced it will do away with situps for Navy physical readiness tests, replacing them with a plank exercise. (Ciarra C. Thibodeaux/U.S. Navy) 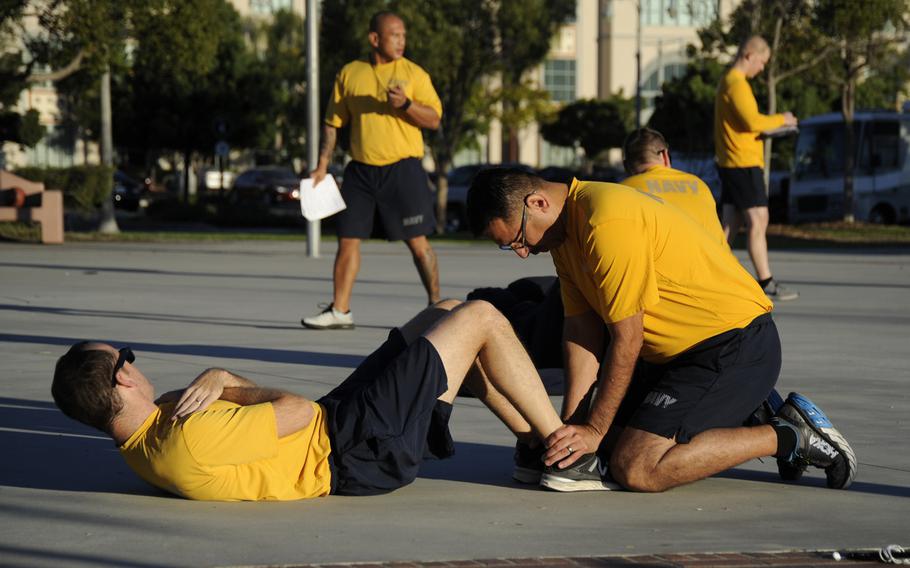 Sailors assigned to 3rd Fleet conduct a physical readiness test in November 2018. The Navy announced it will do away with situps for Navy PRTs, replacing them with a plank exercise. (Timothy Heaps/U.S. Navy)

The Navy is doing away with situps and adding a planking exercise to the physical readiness test, the service’s top officer said during an early morning announcement Thursday.

Chief of Naval Operations Adm. John Richardson and Master Chief Petty Officer of the Navy Russell Smith posted the announcement on the MCPON’s Facebook page after a morning exercise with the crew of the destroyer USS John Paul Jones in Pearl Harbor, Hawaii.

Planking has several forms, but the common forearm plank requires the participant to hold a position similar to a pushup for an extended time, stressing the core muscles. The service is also adding a rowing machine option for the cardio portion of the test, according to the announcement.

The post stated that the changes will take place in 2020 and were “based on feedback from the fleet and after testing and evaluation.”

“We’re going to eliminate the situps because those have been shown to do more harm than good,” Richardson said in the brief video.

The Navy physical fitness assessment is broken down into two parts: the body composition assessment and a physical readiness test that grades sailors based on age and completion of pushups, situps and a 1.5-mile run, or a different cardio option.

Official guidance has not yet been released but comments have already poured in on the MCPON’s Facebook page.

“Been waiting for this, situps are horrible for the back, planks are a much better measure of core strength,” a commenter said.

While the news was met mostly with cheers, the announcement left some questioning how long they will need to plank before the pushup and cardio portions.

“Planks followed by push-ups are going to be rough, but I am up for the challenge,” said another commenter.

Richardson did not specify when official guidance will be released.

The changes come as other services are revamping or reconsidering their fitness test standards.

The Marine physical fitness test typically includes a three-mile run, crunches and pullups or pushups. A separate combat fitness test includes a sprint, ammunition can lift and a shuttle run involving various combat-related tasks, such as crawls and “buddy drags” or carries.

Meanwhile, the Army is pilot testing its new combat fitness test, which includes the deadlift, a standing power throw and other strength-related exercises. It announced earlier this month that it would develop alternative aerobic exercises for soldiers whose injuries prevent them from completing the new test, which is expected to roll out by fall 2020.

The Air Force is researching a method that would plug a value for an airman’s 1.5-mile run time into an equation that would include waist and height measurements. Airmen are tested annually with a run, pushups and situps.