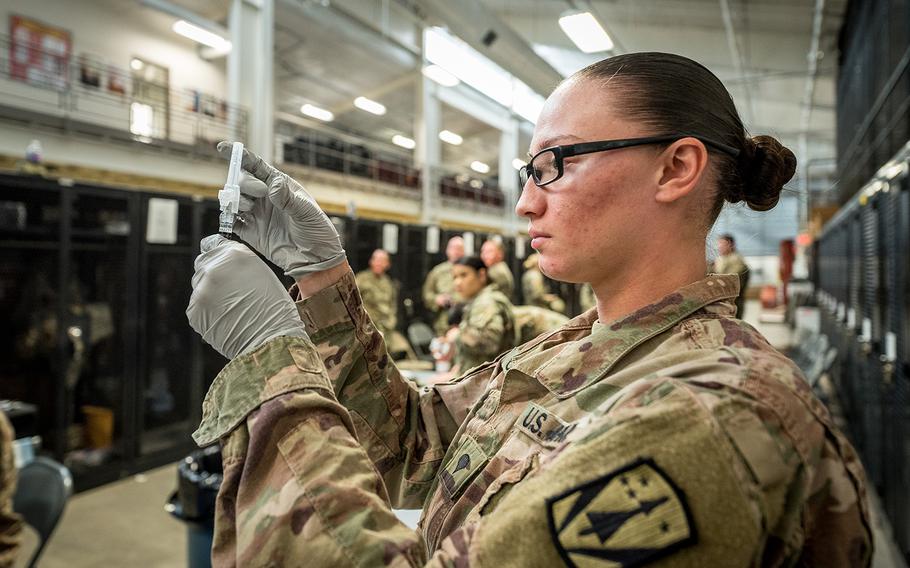 WASHINGTON — Service members and Defense Department personnel are being asked, but are not required, to get the coronavirus vaccine once they become available, defense officials said Wednesday.

“The department is strongly encouraging everyone to take it,” Army Lt. Gen. Ronald Place, director of the Defense Health Agency, said during a briefing at the Pentagon.

The Defense Department on Wednesday announced its plan for distributing the allocation of coronavirus vaccines. The department is one of five agencies to be allocated its own supply of the vaccines, along with the Department of Veterans Affairs, the State Department, the Indian Health Service and the Bureau of Prisons.

A committee of the U.S. Food and Drug Administration will meet Thursday to discuss whether the agency will approve an emergency use authorization for the Pfizer coronavirus vaccine, one of two vaccines that are likely to receive this approval soon. On Tuesday, the United Kingdom began vaccinating citizens there with the Pfizer vaccine.

“This would be the normal process when a vaccine is first issued under emergency use authorization, is typically on a voluntary basis. So we're going to be consistent with that,” said Thomas McCaffrey, the assistant secretary of defense for health affairs.

If the vaccine is eventually fully licensed by the FDA, then the Pentagon will look at whether to make it mandatory for service members, he said.

The department will continue to follow its health protection guidance for the coronavirus pandemic, to include hand washing and social distancing, while it works to vaccinate as many people as possible in the next several months, McCaffrey said.

On Dec. 1, the Centers for Disease Control and Prevention’s Advisory Committee on Immunization Practices recommended health care workers and people living in long-term care facilities should be the first in the United States to receive the coronavirus vaccines.

The Pentagon will follow a similar order for Phase 1 of its distribution plan, vaccinating service members, civilians and contractors who are health care providers and support personnel at military treatment facilities, emergency services personnel and public safety personnel, according to a department.

The department expects to receive slightly fewer than 44,000 doses of the vaccines as its first batch to be distributed to 16 locations in the United States and overseas as part of a pilot program to make certain the distribution process is working, defense officials said.

The initial distribution sites for the department’s vaccines include Madigan Army Medical Center at Joint Base Lewis-McChord, Wash., Walter Reed National Military Medical Center in Bethesda, Md., and Allgood Army Community Hospital at Camp Humphreys in South Korea. The locations were picked based on several criteria including having ultra-cold storage for the vaccines, large medical and security staff who can receive the initial phase of the vaccine and also monitor the vaccination process, and prioritization of the location for the services, according to Place.

Once the pilot program proves the distribution process works, the Defense Department will begin sending the vaccine to hundreds of other sites in the United States and around the world, according to Place.

The next population to get the vaccine in Phase 1 are those who are part of “critical national capabilities,” such as sailors on nuclear submarines, cyber security personnel and defense leaders. A small portion of the initial 44,000 doses will go to the senior defense leadership including acting Defense Secretary Christopher Miller; Army Gen. Mark Milley, the chairman of the Joint Chiefs of Staff; and combatant commanders, according to McCaffrey. Those leaders are also being vaccinated first as part of a messaging campaign to encourage the Defense Department population to get vaccinated, he said.

Personnel who are preparing to deploy within three months will be the next population to receive the vaccine and then all other critical and essential support personnel.

Phase 2 for the Defense Department is vaccinating high-risk beneficiaries, such as residents at the military retirement homes. Phase 3 is vaccinating the remaining healthy population, according to the department.

Outside of the continental United States