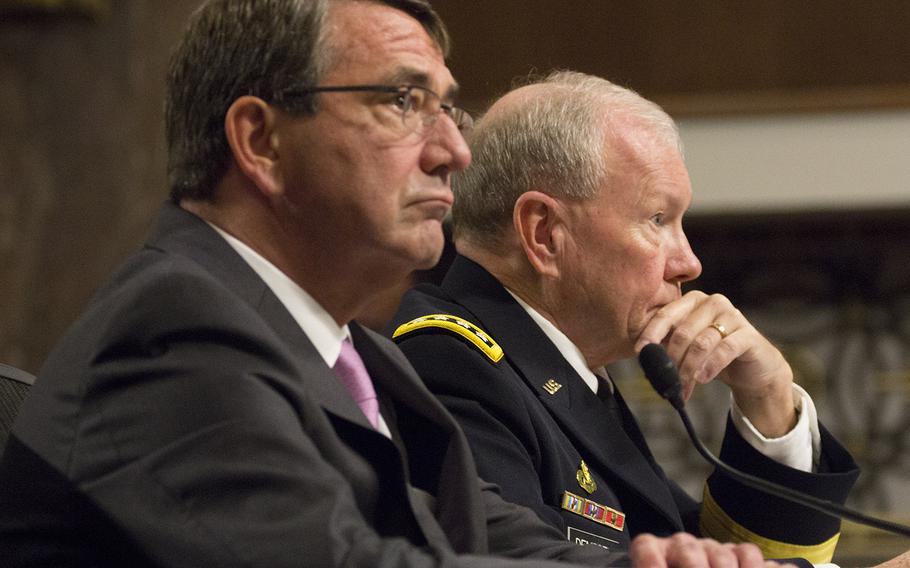 WASHINGTON — Defense Secretary Ash Carter on Tuesday asked the Senate for more patience and support for a train-and-equip program against the Islamic State, despite much lower than expected turnout.

Only 60 moderate Syrian fighters have been trained this year, but recent gains in the country by U.S.-backed militias show the strategy can work, Carter told skeptical senators on the Armed Services Committee. Sen. John McCain, R-Ariz., committee chairman, called claims about success delusional.

Carter and Joint Chiefs Gen. Martin Dempsey came to Capitol Hill to make the administration case for the current war strategy a day after President Barack Obama underscored the importance of training ground forces and allied militias on a rare trip to the Pentagon. The administration had a strategy meeting on the often uneven, year-old Islamic State offensive.

“It is going to take some time to get the numbers up to the point where they can have an effect,” Carter told senators.

The U.S. has waged thousands of airstrikes since it began bombing in Iraq and Syria in August, but its other key strategy of training allied ground forces has gone much slower than anticipated.

The Pentagon estimated it could train about 5,000 moderate Syrian fighters this year.

Carter called 60 Syrians trained “not impressive” and he blamed the low turnout on the rigorous vetting process. Among other requirements, the Pentagon cannot train any fighters who have been involved in atrocities or would create a risk of “green-on-blue” insider attacks on other allied forces.

Carter said he has been given assurances that the number of trainees will grow but provided no future estimates.

In Iraq, 450 more personnel were deployed in recent weeks to Taqaddum air base to train Sunni tribal recruits for the war effort and advise the country’s security forces. The U.S. has trained about 10,500 Iraqi army and counter-terrorism troops, though it had hoped to train 24,000 by this fall.

In recent weeks, U.S. airstrikes have helped the Kurds, along with Arab militias, reclaim the border town of Tal Abyad from the hardline fighters, cut supply lines and put pressure on the group in its power center of Raqqa province in Syria, according to the Pentagon.

Carter said that the Kurdish successes in Syria show the U.S. approach can work with a dependable ground force, and that the train-and-equip programs to fight the Islamic State must be strengthened.

“Those examples demonstrate, again, that where we have had a credible ground force working in a coordinated way with the coalition air campaign, ISIL has suffered,” Carter said, using an alternate name for the Islamic State.

McCain said the president’s claims that the United States has taken out fighters and pushed the group from its territory recently is correct but irrelevant, because the group has expanded overall in Iraq and Syria, and become more influential in the Middle East, Africa and central Asia over the past year.

“When it comes to ISIL, President Obama’s comments yesterday at the Pentagon reveal the disturbing degree of self-delusion that characterizes the administration’s thinking,” McCain said.

Sen. Jeff Sessions, R-Ala., said the slow pace of training is not the central problem of the U.S. strategy; it is a lack of confidence among the Iraqi forces that makes them unwilling to fight.

“We have been training them for nearly a decade,” he said, referring to the billions of dollars the U.S. spent between 2003-2011 to build the security forces.

Sessions criticized the Obama administration for not deploying special operators and troops to the battlefield to advise the Iraqis and guide airstrikes — and pressed Dempsey on whether such a move could swing the war effort.

Dempsey has said since last year he would considered sending ground forces if needed, but he has deemed them unnecessary. He said Tuesday that the environment is not right for ground forces and the only “silver bullet” is getting Iraqis to fight on their own.

“I agree there are points on the battlefield where embedded forces … would make them more capable,” Dempsey said. “I can tell you I have not recommended it.”