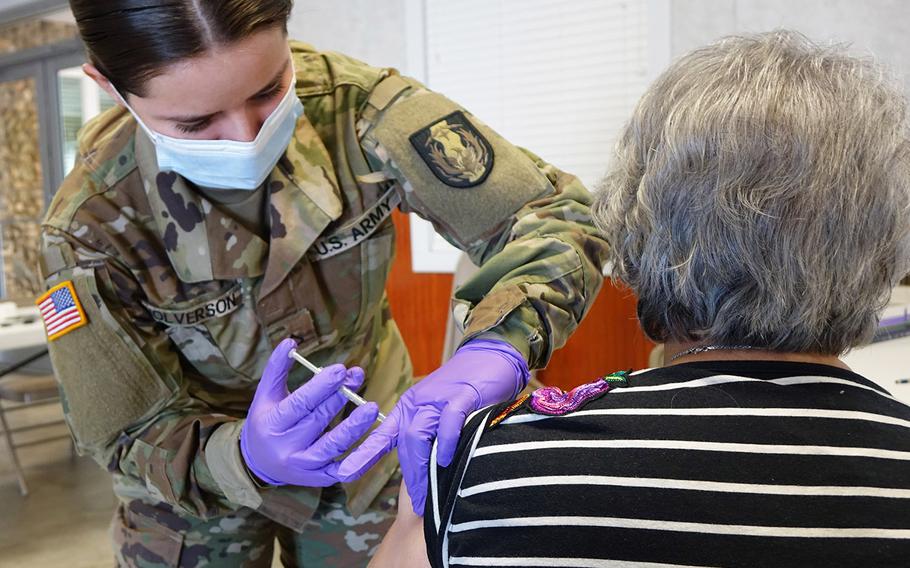 WASHINGTON — The Pentagon will deploy more than 1,000 active-duty troops to support coronavirus vaccination efforts at multiple locations throughout the United States, the Defense Department announced Friday.

Defense Secretary Lloyd Austin approved the deployment of five teams of service members — in total 1,110 troops — to deploy in the coming weeks to vaccination centers run by Federal Emergency Management Agency, the Pentagon said in a statement. One team will deploy to California within days to begin vaccination operations there by Feb. 15, said Andy Slavitt, a White House coronavirus adviser.

“The military’s critical role in supporting sites will help vaccinate thousands of people per day and ensure that every American who wants a vaccine will receive one,” Slavitt said.

Chief Pentagon spokesman John Kirby said Friday that FEMA would decide soon where the other four teams will deploy. But he said he could not reveal where the first team will deploy in California.

Pentagon officials have said FEMA has requested about 10,000 troops for 100 locations across the United States as President Joe Biden’s administration works to ramp up vaccination efforts. The Pentagon is working to fulfill that request, Kirby said.

Each team will include 80 people to conduct vaccinations, meaning those troops will be putting shots in arms, officials said. Each team will also include 15 command-and-control service members, 15 registered nurses, 57 clinical staff and another 55 troops to do other tasks needed at the vaccination sites.

The Pentagon said the military services were in the process of putting the teams together, and it was not clear Friday from which bases they would deploy or how long the missions would last.

“We’re still working with FEMA to determine what sites these other teams will go to and … what that timeline is,” Kirby said. “As for what units will go: The military services are sourcing that right now.”

The active-duty troops will join more than 23,000 National Guard members deployed in at least 38 states on coronavirus-related efforts, including at vaccination and testing locations.

Coronavirus deaths in the United States surpassed 456,000 on Thursday, according to Johns Hopkins University. At least 27 million Americans have received one dose of a coronavirus vaccine by Wednesday and more than six million were fully vaccinated, The New York Times reported.

Defense Secretary Lloyd Austin has pledged the military under his leadership would do more to support the massive federal response to the coronavirus pandemic.

Before taking over last month as the Pentagon’s leader, Austin told senators during his confirmation hearing Jan. 19 that he believed the Pentagon could do more, promising to “lean in” to strengthen military efforts to combat the virus.

“We have to do everything we can to break the cycle of transmission and begin to turn this thing around,” he told the Senate Armed Services Committee.

This week, the defense secretary also mandated the wearing of masks on all U.S. military installations and property across the globe.

“[Coronavirus] is one of the deadliest threats our nation has ever faced,” Austin wrote in a memorandum Thursday announcing that order. “As we have done throughout our history, the military will rise to this challenge.”