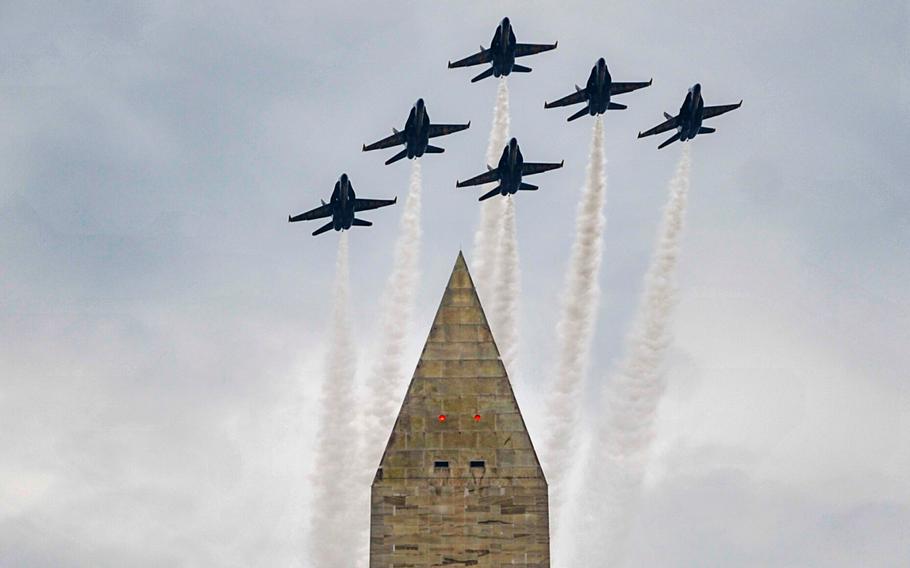 WASHINGTON — It cost the Pentagon about $1.2 million to fly aircraft and set up armored vehicles in support of the president’s “Salute to America” event on the National Mall on July Fourth.

The Independence Day celebration raised concerns in the days leading up to the event partly due to its unknown costs to the military and the potential for political remarks by President Donald Trump during his speech.

The funding for the flying demonstrations came from the military services’ own training budgets designated for flying hours, “which are imperative to military readiness,” according to a Pentagon statement released Tuesday.

Aircraft from each military service flew over the event during parts of Trump’s speech in which he spoke of historical events regarding the United States and its armed services. A military band played each service’s song as their aircraft flew over the crowd standing at the Lincoln Memorial.

Additional funding was also used to transport two M1A2 Abrams tanks and two M2 Bradley Fighting Vehicles from the 3rd Infantry Division at Fort Stewart, Ga., which were used as static displays near the memorial. The Pentagon did not specify which accounts the additional funding came from in its statement.

“The Department of Defense has a long history of showcasing military assets to the country in order to recognize our military's contributions to the safety and security of the nation, and to assist in recruiting future generations of servicemembers,” the Pentagon release states.

The Pentagon also listed similar flyover demonstrations by the military services, with the Air Force having the most with 660 flyovers in 2018. The Army conducted 44 flyovers and the Marine Corps had 22 flyovers. For fiscal year 2019, the Navy had 47 flyovers.

Several of the Navy’s Fleet Week events, which occur at major port cities across the country, were also listed as comparison events by the Pentagon. The costliest in 2017 were in Los Angeles at $1.6 million, San Francisco at $1.8 million, and New York at $2.5 million with the inclusion of fuel costs.

According to the Pentagon, the following aircraft were flown during the Salute to America event on July Fourth:

The Coast Guard had a MH-60J/T Jayhawk helicopter, a MH-65 Dolphin helicopter, and a HC-144 Ocean Sentry aircraft from the Coast Guard Atlantic Sector at U.S. Coast Guard Station Annapolis, Md. The Air Force had a B-2 Spirit stealth bomber from the 509th Bomb Wing at Whiteman Air Force Base, Mo., two F-22 Raptors from the 1st Fighter Wing at Joint Base Langley-Eustis, Va., and a VC-25 aircraft — also known as Air Force One — from the Presidential Airlift Group at Joint Base Andrews, Md. The Marine Corps flew a V-92 helicopter, which is the new Marine One aircraft, and two MV-22 Ospreys aircraft from Marine Helicopter Squadron One at Marine Corps Base Quantico, Va. The Navy had two F-35C Lightning II from Strike Fighter Squadron 147 at Naval Air Station Lemoore, Calif., two F/A-18 Hornet aircrafts from Strike Fighter Squadron 37 at Naval Air Station Oceana, Va., and six F/A-18 Hornet aircrafts from the U.S. Navy Flight Demonstration Squadron — known as the Blue Angels — from Naval Air Station Pensacola in Pensacola, Fla. The Army flew four AH-64E Apache Guardian helicopters from the 101st Combat Aviation Brigade at Fort Campbell, Ky.The ceremonial units that also participated in the Salute to America event were the U.S. Old Guard Fife and Drum Corps with the 3rd U.S. Infantry Regiment "The Old Guard" from Joint Base Myer-Henderson Hall, Va., and the U.S. Marine Corps Silent Drill Platoon and the Free Country ensemble with the U.S. Marine Corps Band from the Marine Barracks in Washington, D.C.