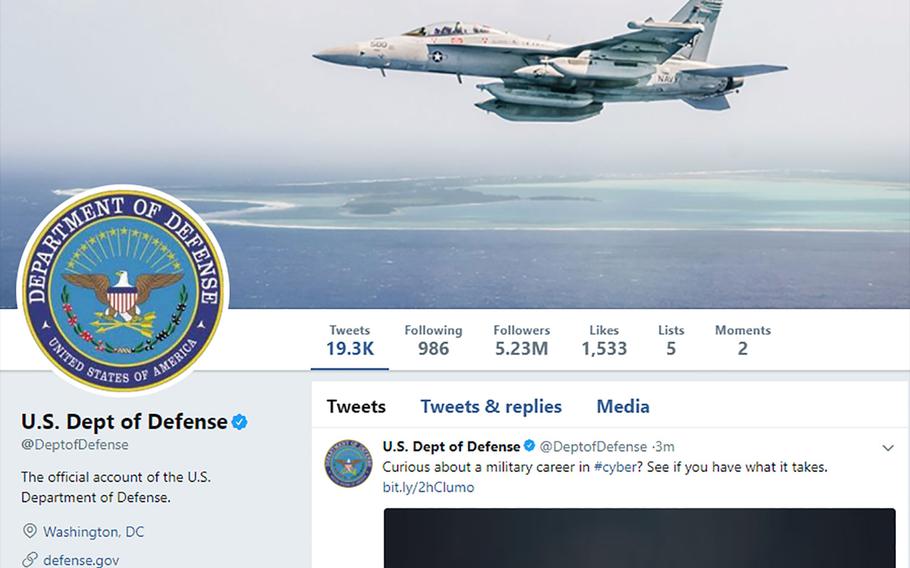 The tweet’s content “would not be endorsed by the Department of Defense,” said Army Col. Rob Manning, a Pentagon spokesman. He added that it was almost immediately deleted once the account’s operator realized the error.

The tweet in question, authored by a user with the handle @ProudResister, called on Trump and high-profile male officials accused in recent days of past sexual misconduct to step down. The user’s profile describes the author as a “Proud Member of #TheResistance” and links to a website that sells T-shirts that include lewd remarks about the president. #TheResistance is a reference to an anti-Trump administration movement.

The tweet, which had been retweeted more than 1,000 time by Thursday afternoon, read: “The solution is simple ... Roy Moore: Step down from the race. Al Franken: Resign from Congress. Donald Trump: Resign from the presidency. GOP: Stop making sexual assault a partisan issue. It’s a crime as is your hypocrisy.”

The error comes one day after another top U.S. military command’s official Twitter account linked to a local television news report that contained errant information about the military’s nuclear capabilities.

U.S. Strategic Command on Wednesday tweeted a link to the story about the Ohio-class ballistic missile submarine USS Kentucky, which inaccurately reported that nuclear weapons could be fired from “secret silos” and that Air Force B-1 bombers “can drop [nuclear weapons] from the air.”

The location of the United States’ missile silos are unclassified and publicly available. B-1 Lancers are conventional bombers, meaning they are incapable of carrying nuclear weapons.

Despite numerous responses pointing out the story’s errors, STRATCOM declined to delete its tweet. In a response to Twitter users’ questions, the command in charge of the U.S. nuclear capabilities wrote that the story provided “good insight into life” aboard the Kentucky. The tweet added that STRATCOM had asked the news station to correct its error. As of Thursday afternoon, the story had not been corrected.