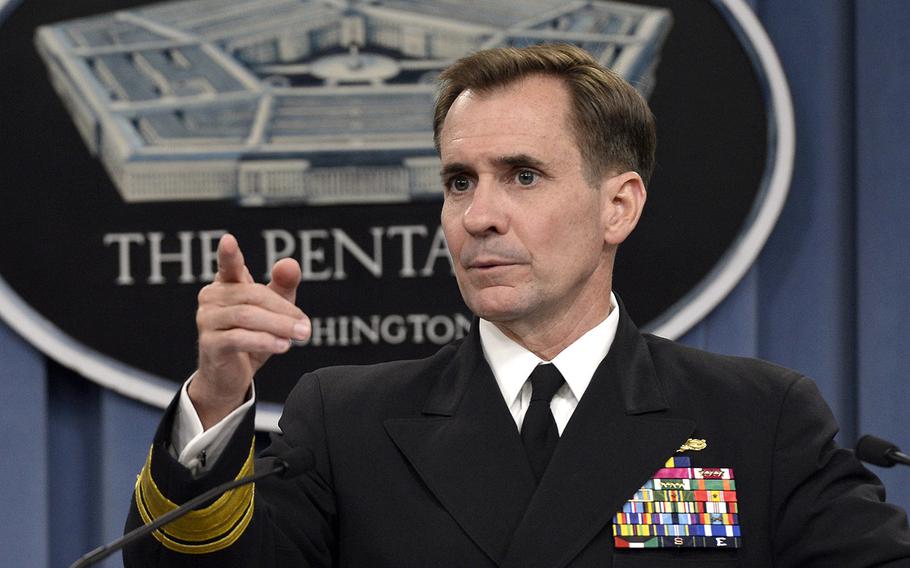 WASHINGTON – The U.S. warned Russia Friday to immediately withdraw a convoy that entered rebel-held territory in the Ukraine and threatened to escalate the country’s ongoing war.

In Brussels, NATO said Russian artillery – “both cross-border and from within Ukraine” – was being used against Ukrainian government forces fighting the pro-Russian rebels.

Separately, a Western official, speaking on condition of anonymity, said it appeared Russian soldiers were firing at the Ukrainians and not simply transferring the weapons to the separatists.

Pentagon spokesman Rear Adm. John Kirby said Russia is violating Ukraine’s sovereign territory by sending the convoy, which has been reported to be at least 130 vehicles, to the embattled city of Luhansk and it will face harsher economic sanctions and further isolation in the world if it does not withdraw.

The Ukraine suggested the convoy was a ruse and on Friday called the move by Russia a “direct invasion” that would provoke an international response, according to The Associated Press. NATO warned there is growing evidence that Moscow is directly intervening in the war by providing air support to rebel forces.

Russia occupied the Crimea peninsula south of the Ukrainian mainland earlier this year and has been massing a growing number of troops on the country’s eastern border in recent weeks. It said Thursday it could wait no longer to enter an area of heavy fighting around Luhansk to bring food and water to besieged civilians.

“Russia must remove its vehicles from the territory of Ukraine immediately,” Kirby said during a press conference at the Pentagon.

Kirby said U.S. intelligence is still working to determine what was in the convoy vehicles that arrived Luhansk and if it was indeed humanitarian supplies for civilians as Russia claimed. The Associated Press reported the vehicles appeared to be at least partially empty.

“We don’t have a perfect picture of what’s inside those trucks,” Kirby said. “It’s the unauthorized entry into Ukraine … which is a violation of the territorial integrity of Ukraine.”

Earlier this week, Russian Defense Minister Sergey Shoygu had promised the United States that his country would not intervene militarily in the Ukraine under the guise of a humanitarian mission, he said. In New York, Russia’s ambassador to the United Nations, Vitaly Churkin, hotly denied that any Russian troops were inside Ukraine.

But Kirby said the U.S. is concerned by the growing number of Russia forces in the area. More than 10,000 heavily equipped troops with armored units, artillery and air defense have massed along Ukraine’s eastern border, Kirby said.

Russia is also arming the rebels with military equipment such as tanks and artillery. “We are seeing a lot of hardware going across that border on a routine basis,” he said.

In the past few days, Ukraine said its troops had recaptured significant parts of Luhansk after fierce fighting and suspicions were running high that Moscow’s humanitarian operation may instead be aimed at halting Kiev’s military momentum.

Speaking on national television, Prime Minister Arseniy Yatsenyuk declared that the half-empty trucks Russia sent into Ukraine were not going to deliver aid but would be used to create a provocation. He said Russia would somehow attack the convoy itself, creating an international incident.

NATO said since mid-August it has seen “multiple reports of the direct involvement of including Russian airborne, air defense and special operations forces in eastern Ukraine.”