Pentagon repeats dire warnings about cuts: 'Wolf is at the door' 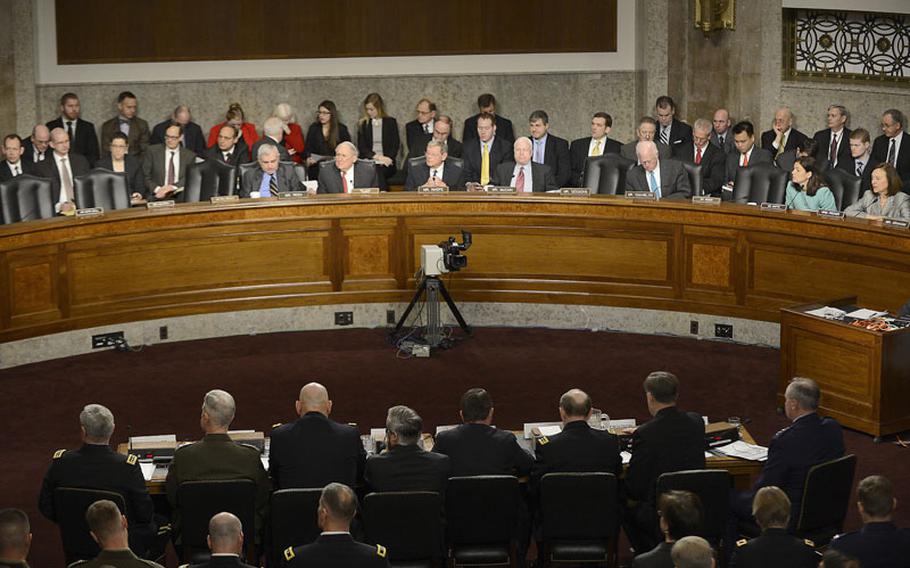 The Joint Chiefs of Staffs testify on Capitol Hill, Feb. 12, 2013, during a hearing before the Senate Armed Services Committee about the potential impact of sequestration and a full-year continuing resolution. (Scott M. Ash/U.S. Air Force)

WASHINGTON — For the second day in the row, Pentagon top brass intensified its warnings to lawmakers about sequestration’s crippling effect on military readiness and its ability to respond to budding conflicts across the globe.

Just 15 days before the March 1 deadline for Congress to prevent automatic cuts, Deputy Secretary of Defense Ashton Carter, joined by his Joint Chiefs of Staffs, repeated dire warnings as they appeared before the House Armed Services Committee on Wednesday on Capitol Hill. On Tuesday, the Senate version of the committee held a similar hearing.

“We meet this morning in the eleventh hour ...,“ said Committee Chairman Rep. Buck McKeon, R-Calif. “Now it appears that this self-inflicted wound is poised to cripple our military in just a few days.”

Military and Congressional leaders painted a stark portrait of the nation’s defense capabilities, if sequester cuts kick in. The Pentagon will be forced to absorb $46 billion in automatic cuts this fiscal year, ending Sept. 30, and longer-term cuts of $500 billion over 10 years. That would come on top of $487 billion in cuts over the next 10 years that the Pentagon agreed to last year.

Among the harmful belt-tightening measures for all forces would be the loss of uniformed and civilian personnel. Army Chief of Staff Gen. Ray Odierno warned the committee of the potential loss of 100,000 soldiers from the active Army, the Army National Guard and the U.S. Army Reserve.

Odierno said Wednesday that he feared seeing the military shelled out into “a hollow force.” He’d said the continued slicing of training and resources would leave troops less adequately prepared and more vulnerable to enemy attacks, as well as degrade morale and retention.

“Do not try to fix this problem on the backs of our military. … That puts lives at significant risk,” Odierno said. Chief of Navy Operations Adm. Jonathan Greenert also emphasized the “irreversible and debilitating impact” the cuts would have on Navy readiness. The Navy is feeling the blows of sequestration and the continuing resolution as it works to counteract a $8.6 billion shortfall in operations and maintenance, he said.

It’s already being greatly harmed by the lingering uncertainty, he said, halting the USS Harry Truman’s Persian Gulf deployment and delaying its overhaul of the USS Abraham Lincoln.

And such decisions “did not come without significant consequences to our people … to our defense industry … or to our local economies,“ he said. All leaders talked about planning under a cloud of instability, marked by repeated stopgap legislation. But that will get much worse if the austerity measures are enacted, they warned.

“Secretary of Defense Leon Panetta has been using the word ‘devastating’ for 16 months,” Carter said. “That was then -- and now the wolf’s at the door.”

Gen. Martin Dempsey, Chairman of the Joint Chiefs of Staff, told the committee that time is now to act to avert sequestration.

“I’m now jumping up and down,” he said. “We are on the verge of an unprecedented crisis.”