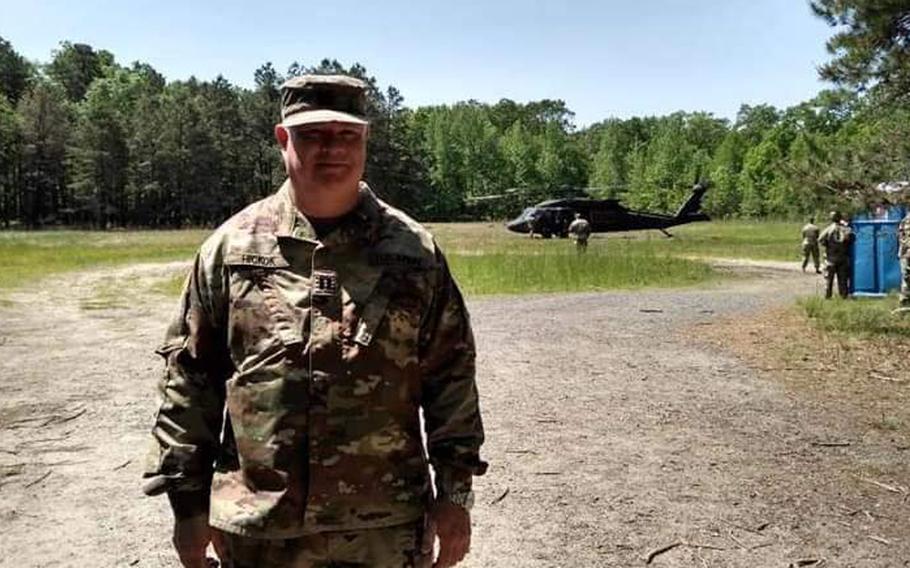 Army Capt. Douglas Linn Hickok, a drilling Guardsman and physician assistant with the New Jersey National Guard, died Saturday after a weeklong battle with the coronavirus, service officials announced Monday. He is the first service member to die from the virus. (Facebook)

WASHINGTON — Four U.S. military-affiliated individuals worldwide, including a member of the National Guard, have died of complications related to the coronavirus, according to the Pentagon’s latest data released Tuesday.

The first two military-linked deaths announced by military officials occurred in Virginia earlier this month. A defense contractor assigned to the Arlington-based Defense Security Cooperation Agency died March 21, officials said. The spouse of a soldier based at Joint Base Langley-Eustis near Newport News died March 26 after testing positive for the virus.

Stars and Stripes on Monday reported a longtime German employee of the U.S. Army’s 21st Theater Sustainment Command in Kaiserslautern died Saturday at a local hospital after testing positive for the virus. It was not clear whether that individual was the civilian worker listed as dead in the Pentagon data released Tuesday.

The names of the individuals who died have not been released by the Pentagon, which has cited federal privacy laws. The National Guard soldier who died Saturday was identified in a statement by New Jersey Gov. Phil Murphy as Army Capt. Douglas Linn Hickok, a drilling Guardsman and physician assistant originally from Jackson, New Jersey.

Cases among American troops jumped by 82 since Monday morning to a total of 716. The Pentagon said 42 service members had recovered from the illness by Tuesday. Thirty-one troops were hospitalized by the virus, according to the data.

Pentagon officials have said in recent weeks that they expected cases would continue to climb in the military community just as in the civilian community. They have urged commanders to ensure their troops are taking precautions to protect against the virus including frequent hand washing and social distancing. Most U.S. military bases across the globe have moved the majority of their force to telework and closed post access to only people deemed mission essential.

The Pentagon on Friday ordered local installations to no longer announce publicly data showing the number of coronavirus cases on their posts. Officials cited operational security, telling reporters that such data could provide adversaries information about military units that have been hit especially hard by the virus, potentially leaving them vulnerable.

The officials pledged to continue to work with local civilian communities to advise them of any threat of the virus from the post. They also said they would continue to publicly announce coronavirus-linked deaths at the department’s installations.