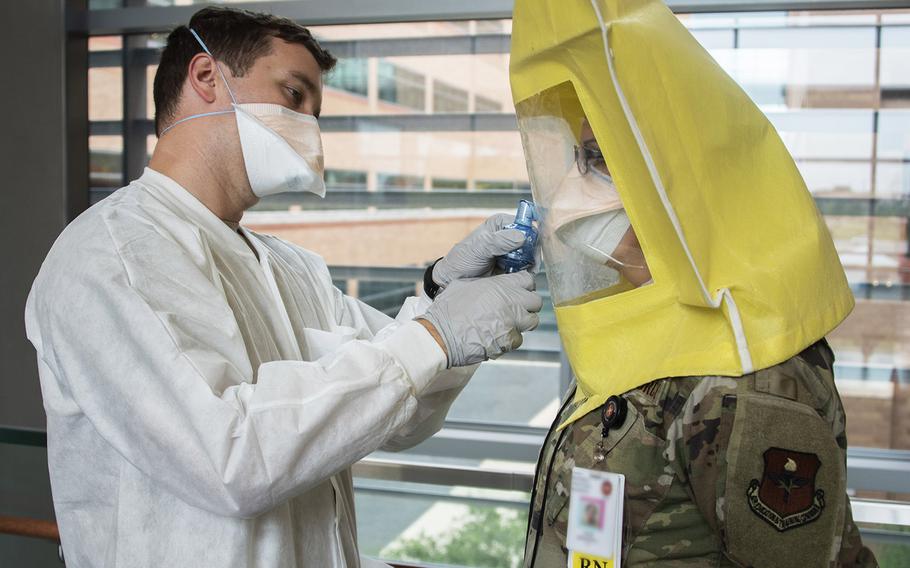 WASHINGTON — Nearly 3,000 American service members worldwide had tested positive for the coronavirus by Friday, according to new Pentagon data that showed military-affiliated individuals infected by the virus nearing 5,000.

The data released Thursday showed more than 22% of the 2,986 service members diagnosed with the fast-spreading virus have recovered from the disease. Forty-four troops are now hospitalized by the virus, which has killed two service members, including 41-year-old Chief Petty Officer Charles Robert Thacker Jr., who died Monday in a Guam hospital after contracting the virus aboard the aircraft carrier USS Theodore Roosevelt.

The outbreak aboard the Roosevelt, which has been sidelined off Guam’s coast since March 27, accounts for more than 20% of the total cases among American troops, by far the worst outbreak in the military. Navy officials said Friday that they had tested 94% of the nuclear-powered ship’s almost 5,000 sailors, resulting in 660 positive cases.

More than 4,000 of the ship’s sailors have been removed from the Roosevelt and quarantined in on-base housing or local hotels as others work to guard and deep clean the ship.

Overall, the Navy reported 1,017 positive cases among its personnel, the most of any of the military services. The Army reported the second highest total with 725 cases among its active-duty and Reserve soldiers. The Air Force reported 328 cases, the Marines reported 236, and the National Guard reported 609 coronavirus-positive troops among its Air and Army Guard members.

Top Pentagon officials pledged this week to increase testing among its troops worldwide, especially after testing of the Roosevelt’s crew revealed more than half of the sailors who tested positive were asymptomatic. But the disease has also hospitalized several members of the crew, including Thacker. Seven Roosevelt crew members were hospitalized for the virus as of Friday, including one sailor who was in intensive care, the Navy said.

Army Gen. Mark Milley, the chairman of the Joint Chiefs of Staff, said Tuesday that the department aimed to improve its testing capacity from about 8,700 test per day to about 65,000 within 45 days, citing the need to ensure asymptomatic carriers were not spreading the virus unknowingly within their units.

The Pentagon especially wants to ensure it is regularly testing members of its top-tier special operations units and others responsible for its nuclear capabilities, Milley said.

Across the Defense Department, 4,849 military-linked people had tested positive for the virus by Friday. In addition to the service members, that included 837 DOD civilian workers, 675 military dependents and 351 defense contractors, the Friday data showed. Among them, 390 people had recovered from the illness.