Pentagon IG will look at Navy’s planning, response to coronavirus outbreaks on ships 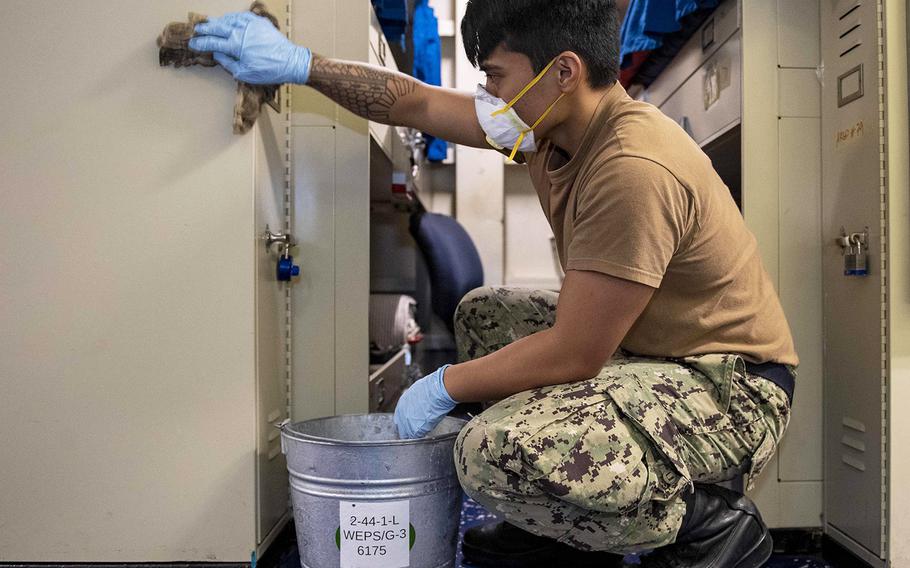 WASHINGTON — The Navy’s approach to preventing the spread of infectious diseases aboard its ships and submarines will be evaluated by the Defense Department’s inspector general, following two recent coronavirus outbreaks aboard warships at sea, the agency announced Monday.

The inspector general’s evaluation will “determine whether the Navy has implemented policies and procedures to prevent and mitigate the spread of infectious disease” such as the coronavirus, as well as “determine whether mitigation measures that are effective in preventing the spread of [the coronavirus] were implemented across the fleet,” according to the announcement.

The evaluation comes after the Navy confronted the coronavirus outbreaks aboard the aircraft carrier USS Theodore Roosevelt and the destroyer USS Kidd. The Roosevelt had more than 1,100 active cases among its crew as of April 30, the last update that the Navy has provided about the outbreak. That report also stated the Kidd had 78 active cases, after confirming its first cases April 24. Both ships had crew members hospitalized, and the Roosevelt had one sailor die in Guam from complications due to the virus.

The inspector general’s evaluation will begin this month and will cover offices at U.S. Fleet Forces Command, U.S. Pacific Fleet and the chief of naval operations, according to the announcement.

The Navy is following Centers for Disease Control and Prevention guidance for cleaning and sanitizing its ships, as well as social distancing and screening measures for sailors. Adm. Robert Burke, the vice chief of naval operations, said in an April 15 message that a ship’s environment, with its confined work spaces and sleeping quarters, “makes it difficult to comply with CDC guidelines.”

“Personal accountability and preventive actions will be critical to our success. Every single sailor must take action, from the operational commander to the deckplate,” he wrote. “It is OK to take yourself out of the game temporarily to keep yourself and your shipmates healthy.”

Adm. Mike Gilday, the chief of naval operations, said Wednesday in a message to the fleet that the Navy has “embraced the challenge” of the virus through learning, adapting, and improving how it operates during the pandemic. That includes implementing public health measures such as face coverings and social distancing, and in its response to the Kidd.

“Each of us must continue to practice and follow all public health measures necessary to minimize risk to our force and our families. Take responsibility. Show courage in speaking up if you see shipmates falling short,” he said. “We have obligations for operational readiness and stringent requirements for health protection measures.”

The Navy’s goal now is to deploy ships without a positive case of the virus, Burke said in his message. That involves at least a 14-day restriction of movement for crew members before they deploy and daily screenings for symptoms.

The Navy also has its own investigation into the service’s response to the outbreak aboard the Roosevelt. The first three cases were reported March 24 and the ship arrived in port in Guam on March 27 to provide medical care and testing to crew members and to clean the ship.

The ship’s former commander, Capt. Brett Crozier, was fired April 2 by the former acting Navy Secretary Thomas Modly after a letter that Crozier emailed to other naval officers requesting to evacuate the ship due to the outbreak was leaked to the media. Modly resigned April 7 when disparaging comments that he made about Crozier and his handling of the outbreak were leaked online.

A second, deeper investigation was directed by acting Navy Secretary James McPherson on April 29 after the initial inquiry left him with “unanswered questions.” His decision followed Defense Secretary Mark Esper’s own request days before for more time to review the Navy’s written investigation after he was verbally briefed by McPherson and Gilday on the initial report’s recommendations.

News reports on April 24 said the Navy leaders had recommended Crozier be reinstated as commander of the Roosevelt. Defense officials have said the Navy’s investigation concerned more than Crozier, and it examined communications between naval officers as well as the service’s virus response efforts spanning multiple time zones and commands.

The Navy’s investigation is expected to be submitted to Gilday by May 27 unless an extension is granted.