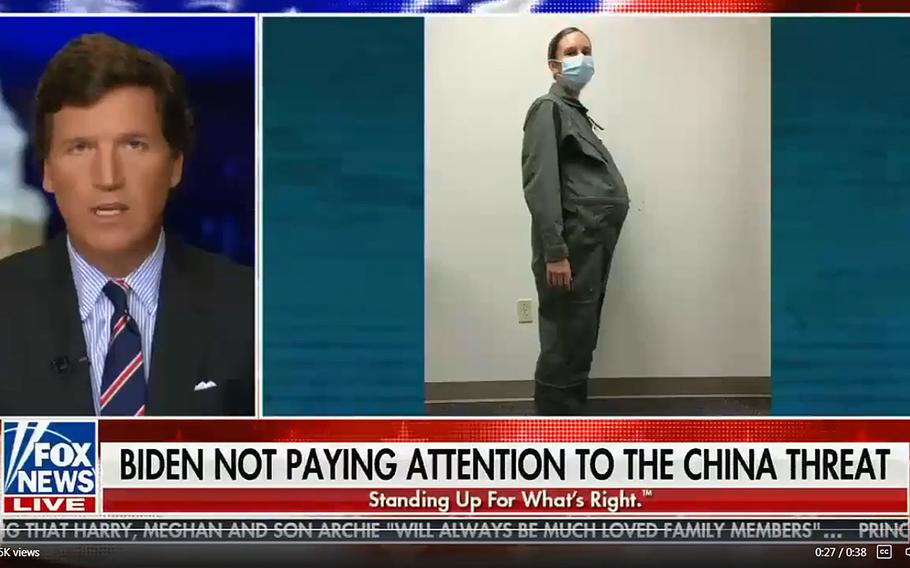 A screenshot from Tucker Carlson's Fox News broadcast from March 10, 2021. During the broadcast, Carlson said pregnant women were going to fight the U.S.'s wars, which made a mockery of the military. The photo is of 1st Lt. Avery Thomson, a program manager for maternity development efforts in the Air Force Uniform Office, modeling a maternity uniform while wearing an artificial pregnancy bump. (Twitter)

A screenshot from Tucker Carlson's Fox News broadcast from March 10, 2021. During the broadcast, Carlson said pregnant women were going to fight the U.S.'s wars, which made a mockery of the military. The photo is of 1st Lt. Avery Thomson, a program manager for maternity development efforts in the Air Force Uniform Office, modeling a maternity uniform while wearing an artificial pregnancy bump. (Twitter) 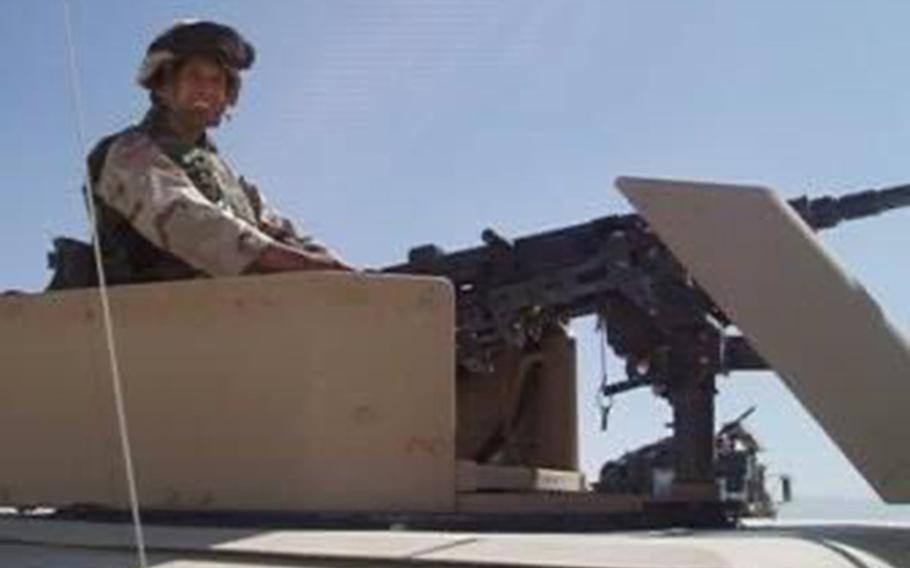 The host of the Parenting in Uniform podcast during her first deployment to Afghanistan in 2005. Now a lieutenant colonel and mother of a toddler, the soldier posted the picture on Twitter in response to Fox News host Tucker Carlson's comment March 10, 2021, about pregnant women in the military. (Parenting in Uniform)

Women in the military deliver more than babies, senior military leaders said after Fox News host Tucker Carlson said on his show that pregnant women “are going to fight our wars” and make a mockery of the U.S. military.

“Women lead our most lethal units with character. They will dominate ANY future battlefield we’re called to fight on,” Sgt. Maj. of the Army Michael Grinston said on Twitter on Thursday, adding that Carlson’s comments hours earlier were divisive and “don’t reflect Army values.”

Carlson said in a roughly 30-second clip on his show Wednesday, “So we’ve got new hairstyles, maternity flight suits. Pregnant women are going to fight our wars.”

“It’s a mockery of the U.S. military,” he added, going on to compare America’s armed forces to China’s, which he said were “becoming more masculine” as they assembled the world’s largest navy.

Carlson showed a photo during his broadcast of an Air Force officer wearing an artificial pregnancy bump while modeling a maternity flight suit still in development. The Air Force has changed some of its rules to allow pregnant service members to fly nonfighter aircraft through their second trimester without a waiver.

The changes were initiated during the Trump administration.

Women’s professionalism, commitment, perspectives and ideas have helped give the military a “decisive advantage,” he said, but recognized that there were still too few women leaders in the senior ranks.

“We pledge to do better, and we will,” he said. “What we absolutely won’t do is take personnel advice from a talk show host or the Chinese military.”

Gen. Paul E. Funk II, commander of the Army Training and Doctrine Command, praised the “thousands of women (who) serve honorably every day around the globe.” U.S. female service members are “beacons of freedom” who prove Carlson wrong, he said on Twitter.

Lt. Gen. Ted Martin, deputy commanding general and chief of staff of the Army Training and Doctrine Command, posted a picture of his daughter in a camouflage utility uniform with the comment: “Contrary to what you may be hearing this WOMAN & 1000’s of WOMEN like her are NOT ‘making a mockery of our military.’ ”

Maj. Gen. Pat Donahoe, commander of Fort Benning and the Army Maneuver Center of Excellence, posted a video of himself conducting a reenlistment ceremony “for one of the tens of thousands of women who serve in our Army.”

“Just a reminder that @TuckerCarlson couldn’t be more wrong,” he said on Twitter.

Female service members were also quick to respond to Carlson, posting pictures of themselves during deployments.

“Is this what mockery looks like?” asked the host of the Parenting in Uniform podcast in a tweet above a picture of her manning a .50-caliber machine gun on a Humvee.

The picture was taken during her first deployment in Afghanistan in 2005, when she was a platoon leader with the 846th Engineer Battalion, she told Stars and Stripes. She deployed three more times during nearly 18 years of service.

A National Guardsman who tweets as @SilverBeaty shared an image taken during her 3 a.m. shift guarding the Capitol building.

“Just trying to make sure I understand the line between being part of the Nation’s defense and part of the feminization of the military,” she wrote.