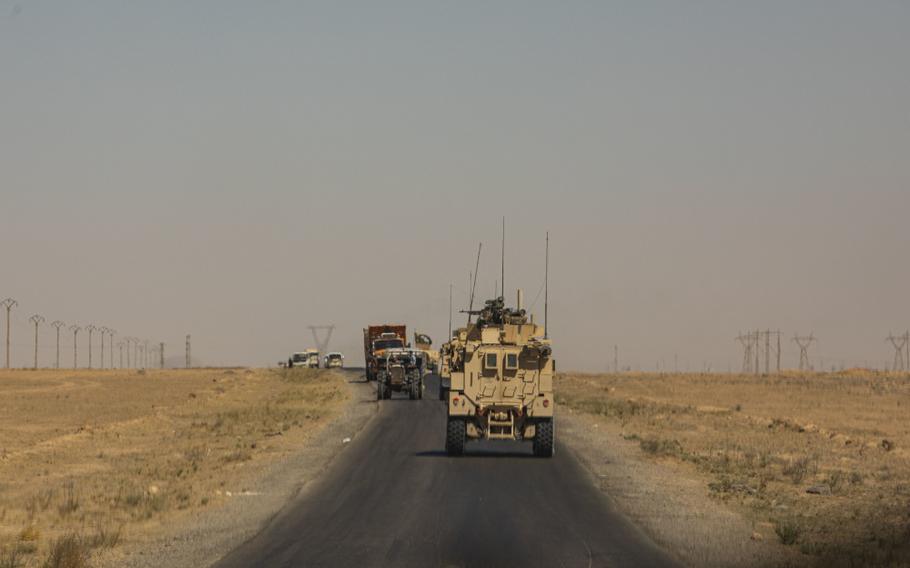 WASHINGTON — The Pentagon on Thursday called Russian actions in northeastern Syria “dangerous and unacceptable” two days after U.S. service members were injured during an encounter with Russian troops.

“On Tuesday, Russian forces breached our deconfliction arrangement in Syria and injured U.S. service members with their deliberately provocative and aggressive behavior,” Jonathan Hoffman, the chief Pentagon spokesman, said Thursday in a statement.

The U.S. service members were conducting a routine security patrol in northeast Syria as part of the Defeat-ISIS Coalition when they encountered a Russian military patrol near Dayrick, John Ullyot, a spokesman for the National Security Council, said Wednesday.

At one point, a Russian vehicle hit an American vehicle, which caused injuries to the crew. The statements made by Hoffman and Ullyot did not say how many were injured, though CNN reported Wednesday that as many as four U.S. service members suffered “concussion-like injuries.”

U.S. military personnel in Syria have often found themselves operating in close proximity to Russian troops who are backing the Syrian regime, but this is believed to be the first time U.S. troops have been injured in an encounter with Russian forces, CNN reported.

“Our military deconflicts operations in time and space with Russian forces in Syria to protect the force and mitigate risk of unintended escalation,” Hoffman said Thursday.

One U.S. official told CNN that Tuesday's incident occurred in the established security zone in eastern Syria where U.S. and Syrian Democratic Forces regularly operate and added the Russians are aware they are obligated to notify U.S. troops in the area of their operations.

The coalition patrol left the area after the encounter with Russian forces to avoid escalating the situation, according to a National Security Council statement. Hoffman praised their actions, which he said was done “through professionalism and restraint, which are hallmarks of the U.S. military.”

A Russian military helicopter also flew low and fast over the area in a tactic that is often used by military forces to try to disperse personnel on the ground, U.S. officials told CNN.

The Pentagon has told the Russians that “their behavior was dangerous and unacceptable,” Hoffman said. “We expect a return to routine and professional deconfliction in Syria and reserve the right to defend our forces vigorously whenever their safety is put at risk.”

Gen. Mark Milley, the chairman of the Joint Chiefs of Staff, spoke on the phone Wednesday with his Russian counterpart Gen. Valery Gerasimov. A Russian Defense Ministry statement said the two generals discussed the incident and that Gerasimov stated their military had notified the U.S.-led coalition about the route of a military police convoy, The Associated Press reported.

“Despite that, in violation of the existing agreements, the U.S. troops attempted to block the Russian patrol,” the Russian Defense Ministry said in the statement, the AP reported. “In response to that, the Russian military police took the necessary measures to prevent an incident and to continue the fulfillment of their task.”

A statement by the Joint Staff regarding the call Wednesday did not provide information about what was discussed, citing an agreement between the military officers to keep the details of their conversation private.

About 500 U.S. service members are in northeastern Syria fighting alongside Syrian Democratic Forces against the remnants of the Islamic State in the country to prevent the reemergence of the terrorist organization, according to news reports.