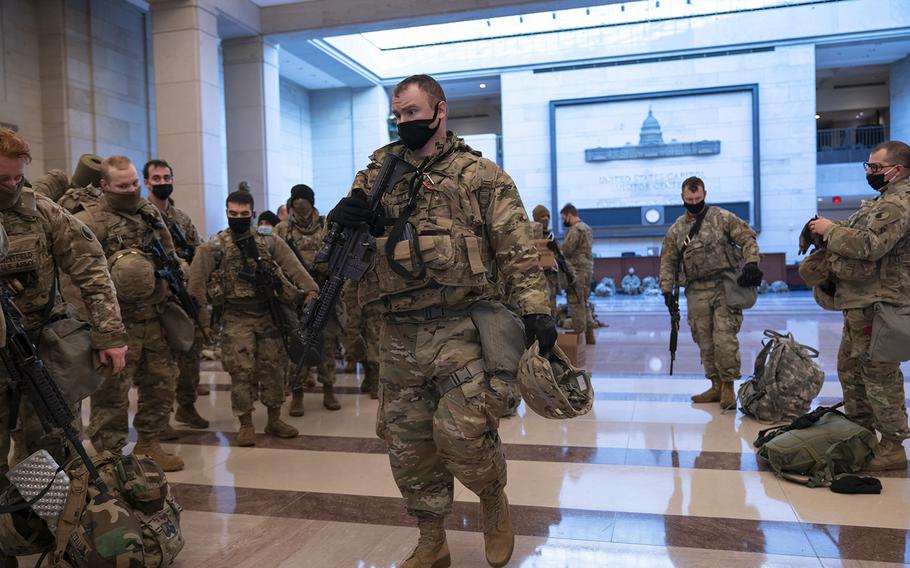 Hundreds of National Guard troops are stationed inside the Capitol Visitor Center to reinforce security at the Capitol in Washington, Wednesday, Jan. 13, 2021. (J. Scott Applewhite/AP) 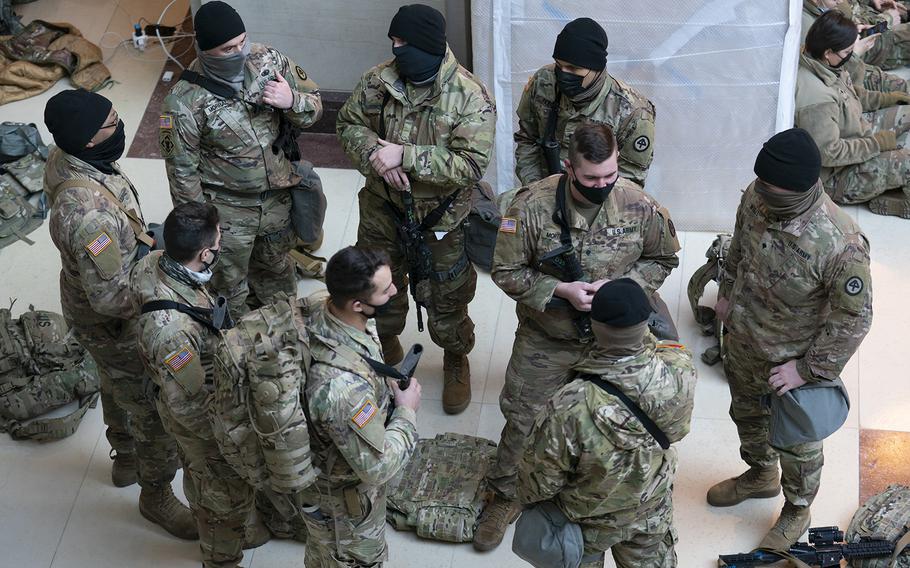 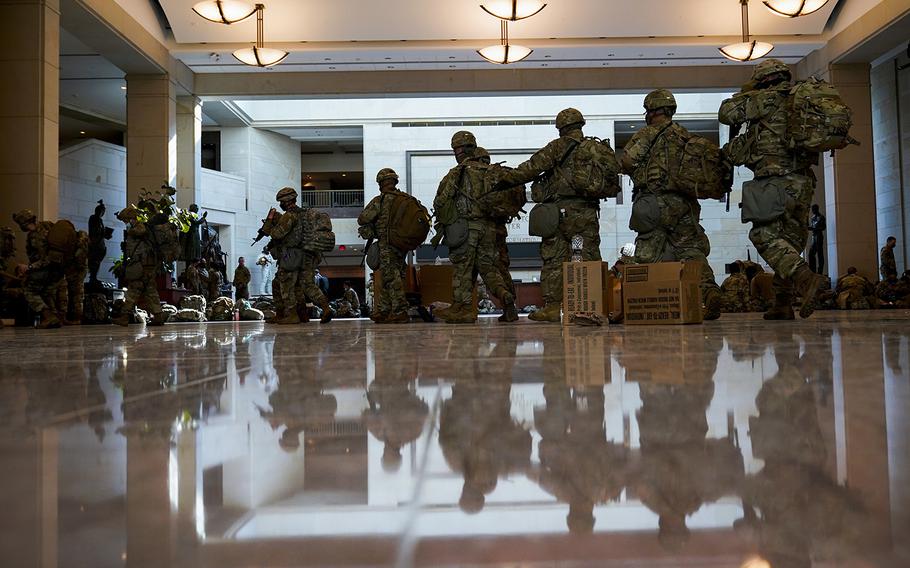 Troops move inside the Capitol Visitor Center to reinforce security at the Capitol in Washington, Wednesday, Jan. 13, 2021. (Alex Brandon/AP) 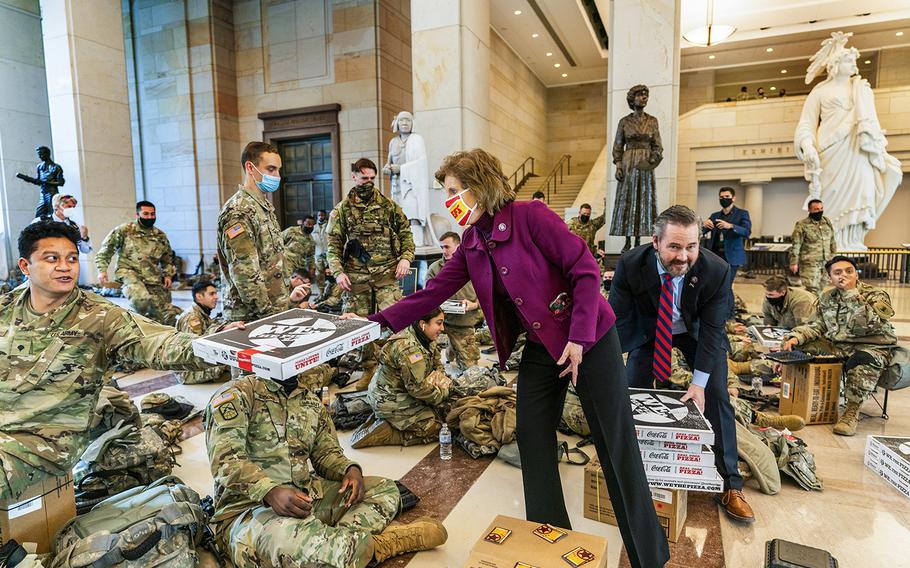 National Guard troops stationed in and around the Capitol have been approved to carry their service firearms, M4 carbines and M9 pistols, as law enforcement and Army officials fear the potential for further violence ahead of President-elect Joe Biden’s inauguration next week, two defense officials confirmed. The hourslong siege of the Capitol on Jan. 6 by some supporters of President Donald Trump resulted in at least five deaths, including a Capitol police officer who was injured during the melee.

Some 6,200 Guard troops from at least six states and the D.C. National Guard were deployed to the nation’s capital as of Wednesday. They had not previously been authorized to carry firearms or nonlethal weapons.

Hundreds of troops have been stationed in and around the Capitol, where 7-foot, nonscalable fencing has been erected around the entire building for protection. More National Guard forces, including troops from Illinois and Utah, were preparing to deploy to the city, where at least 10,000 National Guard troops were expected on duty by the weekend.

The Pentagon, after receiving requests from local and federal law enforcement in Washington, has authorized up to 15,000 National Guard troops activated for Biden’s inauguration on Jan. 20.

The entire 1,100-member D.C. National Guard was activated Jan. 6, as the mob marched on the Capitol after listening to Trump speak near the White House. Some attacked and overran police, vandalized the building and briefly halted Congress’ certification of Biden’s Electoral College victory.

The defense officials, who spoke on condition of anonymity, said Army Secretary Ryan McCarthy made the decision to arm troops around the Capitol. McCarthy has been working daily with federal and local law enforcement officials to determine the risk troops could face, the officials said. Both officials declined to say what led to the decision to arm some troops.

The decision came as House members were poised Wednesday to vote on a single impeachment article against Trump, charging him with “incitement of insurrection.” The article cites Trump’s repeated and unfounded claims of a fraudulent election and asserts he "willfully made statements that, in context, encouraged — and foreseeably resulted in — lawless action at the Capitol, such as: 'if you don't fight like hell you're not going to have a county anymore’."

At least five Republican House lawmakers had announced by Wednesday their intention to vote alongside Democrats to impeach Trump.

In an extraordinary memorandum issued Tuesday to the entire military force, all eight members of Joint Chiefs of Staff including its chairman, Army Gen. Mark Milley, asserted the U.S. military will obey lawful orders from civilian leadership and “remains fully committed” to protecting and defending the Constitution. The memo also affirmed Biden would become commander-in-chief on Jan. 20

“We witnessed actions inside the Capitol building that were inconsistent with the rule of law,” the generals wrote in the one-page memorandum. “The rights of freedom of speech and assembly do not give anyone the right to resort to violence, sedition and insurrection.”

The Army’s top officials — McCarthy, Army Chief of Staff Gen. James McConville and Sgt. Maj. of the Army Michael Grinston — sent another letter this week to their force, calling the Capitol siege a “violent riot” and an “attack on the U.S. Congress and our constitutional democracy.”

Their letter warned soldiers must “do the right things the right way, whether they are in or out of uniform.”

At least one active-duty Army officer is under investigation by her command for attending the rally Jan. 6 before the attack on the Capitol. Fort Bragg officials said Capt. Emily Rainey attended the rally, but they had not determined if she had broken any laws or Army regulations. She told The Associated Press that she did not enter the Capitol and had not violated any rules. Rainey had resigned her commission following a previous punishment, and she is scheduled to be discharged in April, officials said.

Some 70 individuals have been charged with crimes for their roles in the siege, FBI officials said Tuesday. They said they had opened more than 160 criminal cases and expected to charged hundreds of people for their involvement.

“To maintain the sacred trust of the American people, it is important that all of those who represent the Army, in any capacity, remain models of professionalism, character and integrity,” the Army leaders wrote in their memo. “The Army is steadfast in its role to defend our nation, and our National Guard soldiers continue their mission to support local law enforcement security efforts.”