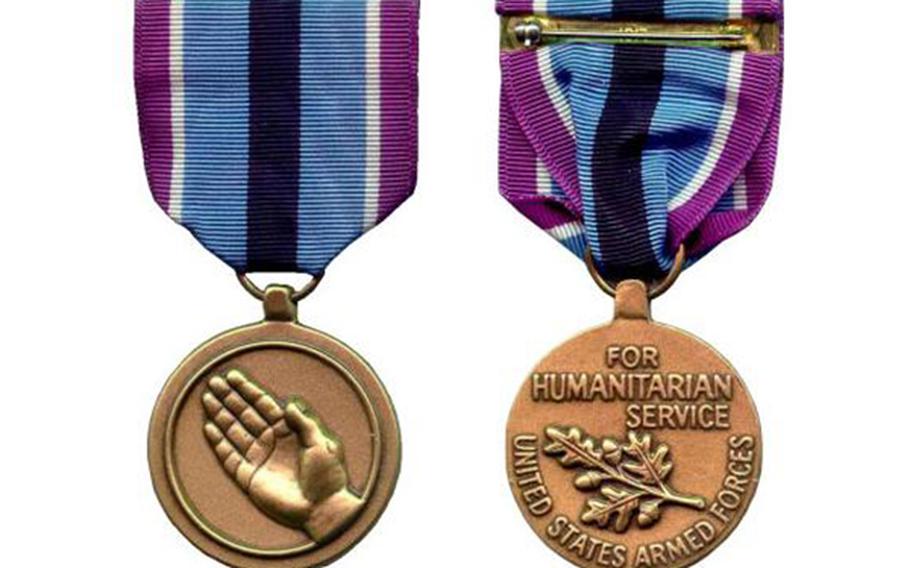 WASHINGTON — The Pentagon has authorized the Humanitarian Service Medal for troops who responded following a pair of devastating 2018 typhoons that ripped through American territories in the Pacific, among other nations.

The Joint Chiefs of Staff approved the medal for service members who directly contributed to humanitarian and disaster relief operations in Guam and the U.S. Commonwealth of the Northern Mariana Islands after they were struck by Typhoon Mangkhut in September and Typhoon Yutu in October. The announcement came via an administrative announcement to the Marine Corps dated Nov. 19.

The Humanitarian Service Medal was first issued in 1977 and has been awarded to service members deployed for natural and man-made disaster responses dating back to evacuation operations from Vietnam, Laos and Cambodia in 1975 as the Vietnam War ended. The medal, which features an outstretched right hand meant to symbolize a helping hand, has since been issued for responses to scores of disasters ranging from hurricanes and floods to aircraft crashes and operations to remove mines from former conflict zones, according to Pentagon records.

It was most recently approved for hurricane response operations following major storms that struck U.S. states and territories in 2017 — Hurricanes Harvey, Irma and Maria. Harvey hit Texas and Louisiana that August, while back-to-back storms Irma and Maria struck Florida that September and several Caribbean islands – including Puerto Rico and the U.S. Virgin Islands.

More than 800 U.S. service members from each military branch responded to relief operations last year after Typhoons Mangkhut and Yutu, both Category 5 storms that left long wakes of devastation across the Pacific, according to the Pentagon.

In September 2018, Mangkhut struck Guam, leaving some 80 percent of the island without power, and the Northern Marianas, about 130 miles north of Guam. It later hit the Philippines, Hong Kong and mainland China. The storm was responsible for hundreds of deaths, according to news reports, and was the strongest typhoon to hit Hong Kong since 1983.

Just more than two months later, Yutu struck the Northern Mariana islands of Tinian and Saipan with winds reaching 180 mph, the strongest recorded storm to ever make landfall on the U.S. territories. Like Mangkhut, Yutu went on to strike the Philippines and Hong Kong.

Those service members who were physically in Guam or the Northern Marianas between Sept. 11, 2018 and Feb. 2, 2019 and “directly contributed to and influenced the action” during disaster operations should receive the Humanitarian Service Medal, according to the directive. Commanders in the rank of O-6 – colonel or Navy captain – or higher should submit rosters of their troops authorized for the medal.