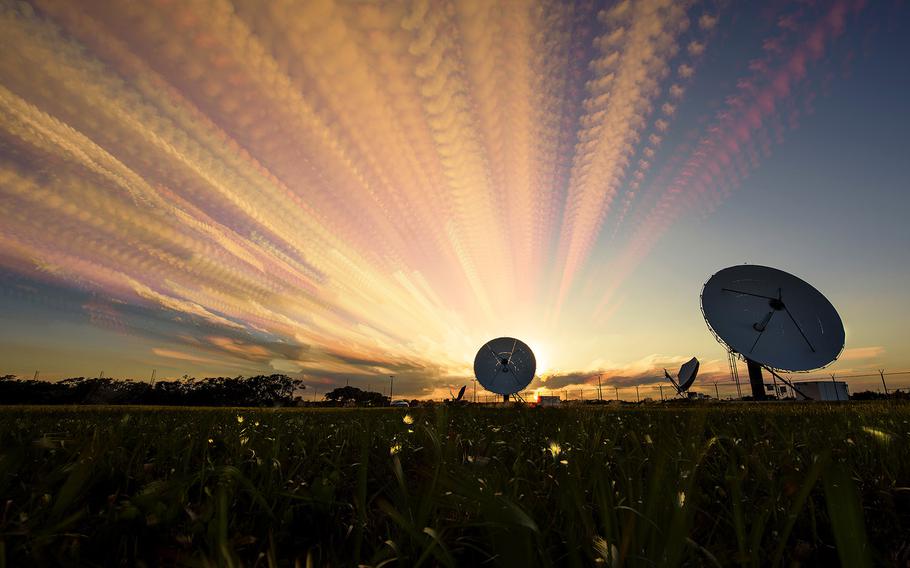 The park at Cape Canaveral, Fla. showcases several pieces of equipment that were monumental to the development of Air Force Space Command. Here, 216 photos captured over a 90 minute period are layered over one another, making the star trails come to life. (David Salanitri/U.S. Air Force)

“The Department of the Air Force evaluated each location and will now conduct both virtual and on-site visits at each candidate location to assess which location is best suited to host the U.S. Space Command Headquarters,” Stefanek said. “This assessment will be based on factors related to mission, infrastructure capacity, community support, and costs to the Department of Defense.”

The Air Force initially expected to announce a home base for Space Command’s about 1,400 military and civilian headquarters workforce by late 2019, even releasing a different list of six finalists as possible locations last year. But the service scrapped those plans in May and began a new search.

The new effort allowed American communities to self-nominate themselves for consideration to host Space Command. Air Force officials at that time announced that to be considered, communities must be within 25 miles of an existing military base, within one of the top 150 most populous Metropolitan Statistical Areas within the country, and score at least 50 out of 100 points on the American Association of Retired Persons’ Livability Index.

SPACECOM was formally established in August 2019 to oversee and control the U.S. military’s myriad space-based infrastructure and operations. It has been temporarily housed at Peterson AFB in Colorado Springs since it was established.

Peterson AFB is one of two locations to twice be named a finalist. The Army’s Redstone Arsenal near Huntsville, Ala., is the other.

Stefanek said the Air Force considered locations in 24 states before naming the finalists on Thursday.

Air Force officials have said previously the service estimated it could take some six years to build the facilities necessary to house U.S. Space Command, once a location is chosen.

Space Command’s establishment last year was actually a re-establishment of the combatant command, after the Pentagon shuttered it in 2002 as part of the post-9/11 government restructuring. It was established just months before the newest military branch, U.S. Space Force, was founded last year.

Under Defense Department structure, the military services — in this case, the Space Force — are responsible for training and equipping troops who then operate under the leadership and control of a combatant command— in this case, the Space Command. Space Force, as it grows, is expected to provide the bulk of the troops assigned to Space Command, but the other military services will also provide some troops to the command, officials have said.

Space Force, like all military services, is headquartered at the Pentagon, where it will remain. It is led by Gen. Jay Raymond, the chief of space operations.