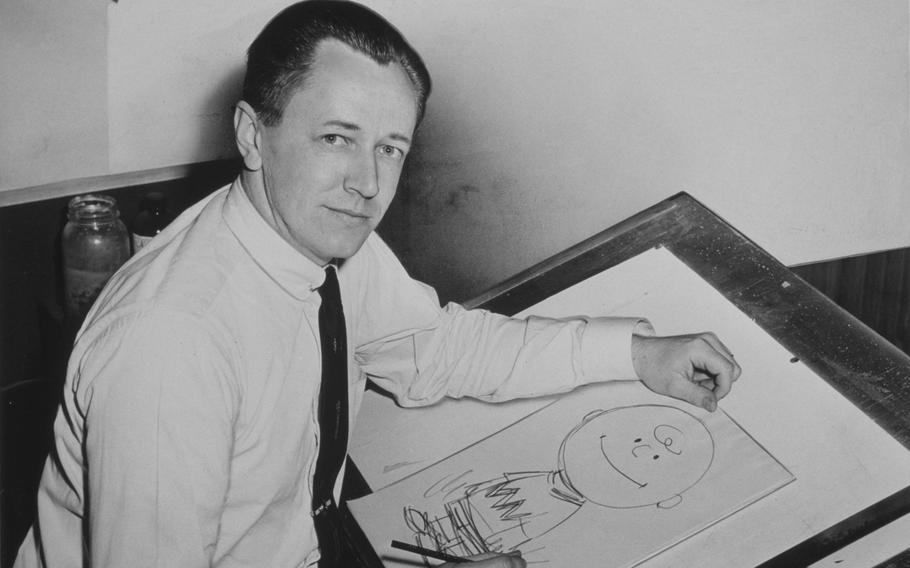 Charles M. Schulz sits at a drafting table with a drawing of Charlie Brown in 1956. Schulz, who served in the Army during World War II, created the comic strip Peanuts, which featured the characters Charlie Brown and Snoopy, among others. (Roger Higgins/Library of Congress)

Charles M. Schulz sits at a drafting table with a drawing of Charlie Brown in 1956. Schulz, who served in the Army during World War II, created the comic strip Peanuts, which featured the characters Charlie Brown and Snoopy, among others. (Roger Higgins/Library of Congress) 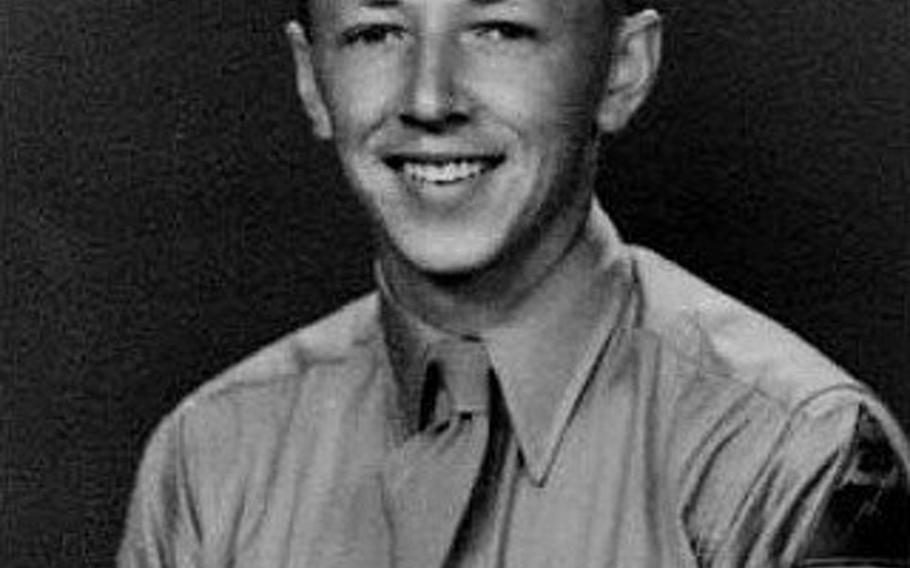 Staff Sgt. Charles M. Schulz, who went on to create Peanuts, poses in his U.S. Army uniform in 1943. Schulz said he drew on his experiences during World War II in putting together the comic strip. (U.S. Army)

The cartoonist who created the Peanuts gang and television specials like “A Charlie Brown Christmas" drew from some of his experiences as an Army staff sergeant during World War II to fashion the enduringly popular comic series.

Charles Schulz, the cartoonist behind “Peanuts,” took part in the liberation of the Dachau concentration camp and the occupation of Munich shortly before the end of the war.

Biographies about Schulz, as well as his own essays, talk about the impact military service had on him and the characters he created.

“The three years I spent in the army taught me all I needed to know about loneliness,” Schulz wrote in “My Life with Charlie Brown,” published in 2010. “My sympathy for the loneliness that all of us experience is dropped heavily upon poor Charlie Brown.”

Much like Charlie Brown, Schulz was a small, shy and geeky boy who dwelled on his bad luck, and there was a real Little Red-Haired Girl who turned down his affections, according to the 2007 book “Schulz and Peanuts: A Biography,” by David Michaelis.

In November 1942, Schulz received his draft notice. The Army’s call meant that he would have to leave his mother who was suffering from cervical cancer. Schulz dutifully reported to Fort Snelling in Minnesota for induction into the service, visiting his mother whenever he could on weekend passes and holiday furloughs.

On one of these trips, his mother from her sickbed told him it would be nice if the family had a dog named Snoopy, a name much like a common Norwegian form of endearment, Michaelis wrote. But this was never to be. She died in February of 1943 and Schulz left for basic training a few days later.

He arrived at the newly built Camp Campbell in Kentucky and was assigned to the 20th Armored Division. Other soldiers remembered Schulz as being homesick and visibly lonely. Schulz recalled crying himself to sleep in his bunk as he grieved his mother amid the stresses of training for combat.

But during his stint in basic training, Schulz’s confidence grew, and his intelligence and proficiency in weapons set him apart.

He became a staff sergeant and a squad leader, and was selected to train the new batch of incoming recruits.

On Feb. 25, 1945, Schulz’s unit landed in France. They trained at a chateau near Rouen in Normandy.

Schulz would often think about the gray stone walls of this chateau, he wrote in a 1991 essay about how he found ideas for his comics. Charlie Brown and pals would one day spend a night at the chateau in the movie “Bon Voyage, Charlie Brown (and Don’t Come Back!!).”

His unit trekked 1,400 miles through Europe, entering Germany and playing a part in liberating Dachau, according to the Charles M. Schulz Museum and Research Center.

He survived some close calls, including a sniper attack in a village near Rosbach, Germany, and a moment where he was seconds from killing two German soldiers, only for them to surrender at the last moment, Michaelis wrote.

Schulz came home from the war newly confident, but he would always remember how his return didn't have the fanfare he expected. His father didn’t stop cutting a customer’s hair to welcome him back, he said.

Schulz pursued cartooning, which he had trained for prior to getting drafted. By 1950, his comic strip “Peanuts” reached national syndication, leading to a career in which Charlie Brown and his pals would wind up in newspapers, TV shows and merchandise the world over.

He made a point of paying tribute to other WWII veterans through his cartoons. On Veterans Day, Snoopy would quaff root beers with Stars and Stripes cartoonist Bill Mauldin, whose comic strip, “Willie and Joe,” Schulz had read while deployed.

Schulz led efforts to honor the D-Day invasion and donated $1 million to fund what would become the National D-Day Memorial in Bedford, Va.

His Combat Infantryman Badge would remain one of his proudest possessions throughout his life, and he would proudly recall how he was, in his words, “a foot soldier.”