Patients recount medical horrors under care of military doctors, with no legal recourse 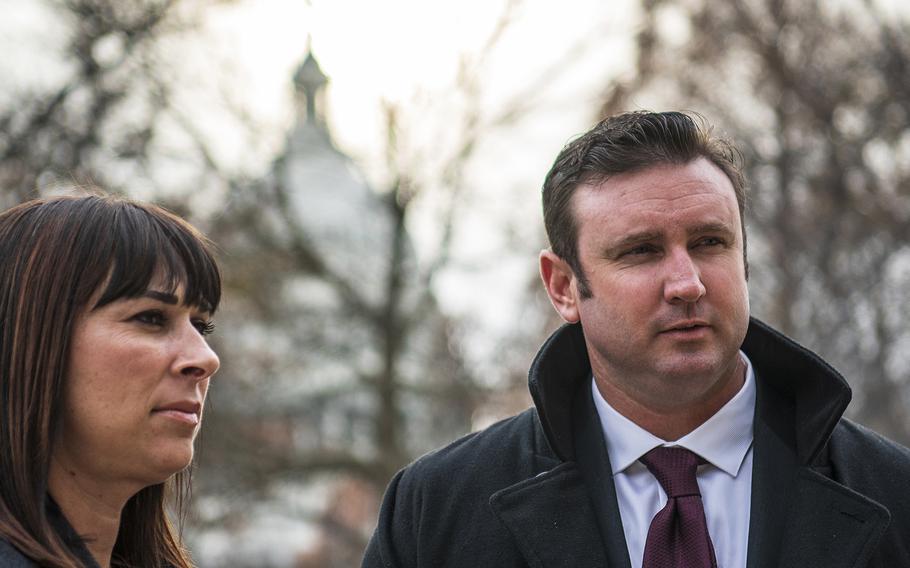 Sgt. 1st Class Rich Stayskal, an Army Green Beret suffering from terminal lung cancer, arrives on Capitol Hill in Washington with his wife Meg on Wednesday, Dec. 13, 2018. Stayskal says doctors at Fort Bragg missed the tumor on his lung evident in a scan six months earlier. He is now fighting to change the Feres Doctrine which bars him and other active duty servicemembers from suing the government even for medical malpractice. (Carlos Bongioanni/Stars and Stripes)

Sgt. 1st Class Rich Stayskal, an Army Green Beret suffering from terminal lung cancer, arrives on Capitol Hill in Washington with his wife Meg on Wednesday, Dec. 13, 2018. Stayskal says doctors at Fort Bragg missed the tumor on his lung evident in a scan six months earlier. He is now fighting to change the Feres Doctrine which bars him and other active duty servicemembers from suing the government even for medical malpractice. (Carlos Bongioanni/Stars and Stripes) 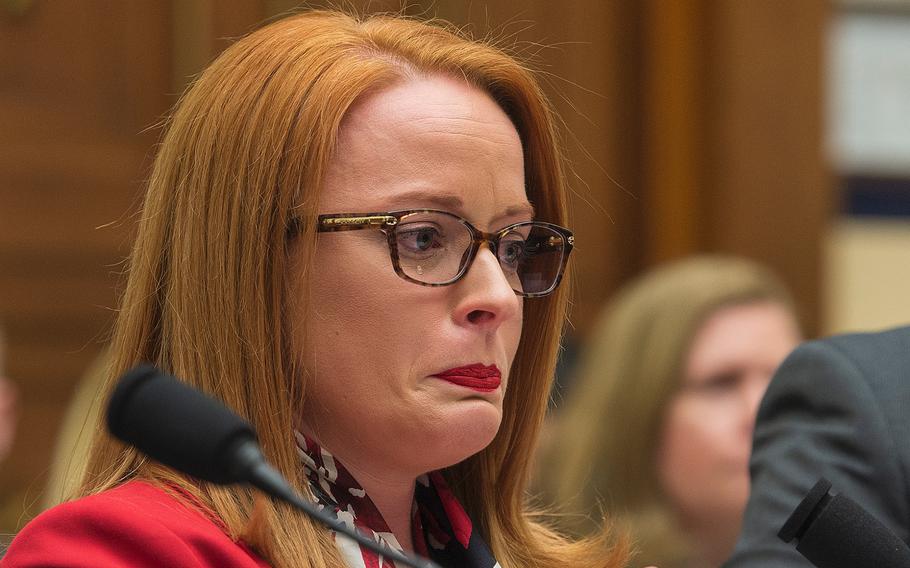 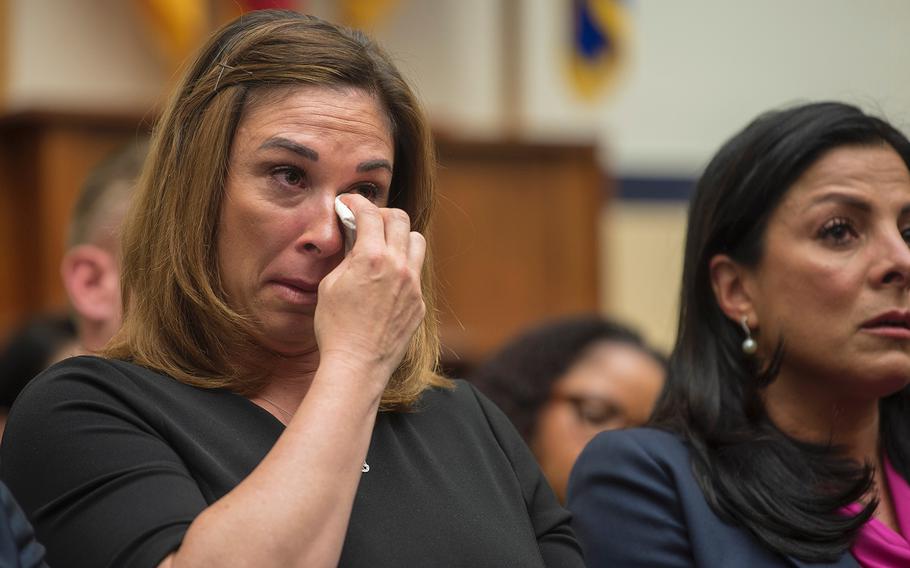 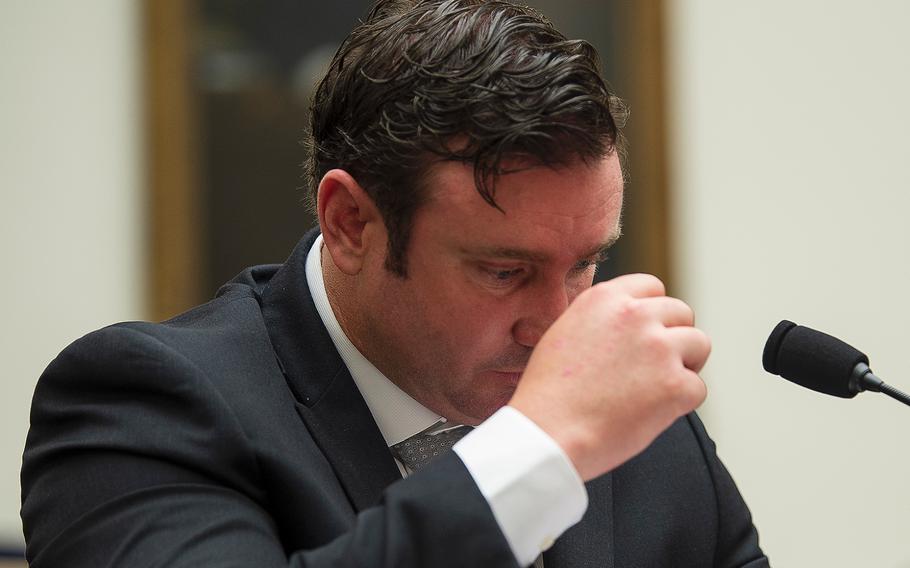 Army Green Beret Sgt. 1st Class Richard Stayskal pauses to hold back tears while testifying during a hearing on Capitol Hill in Washington on Tuesday, April 30, 2019. (Carlos Bongioanni/Stars and Stripes) 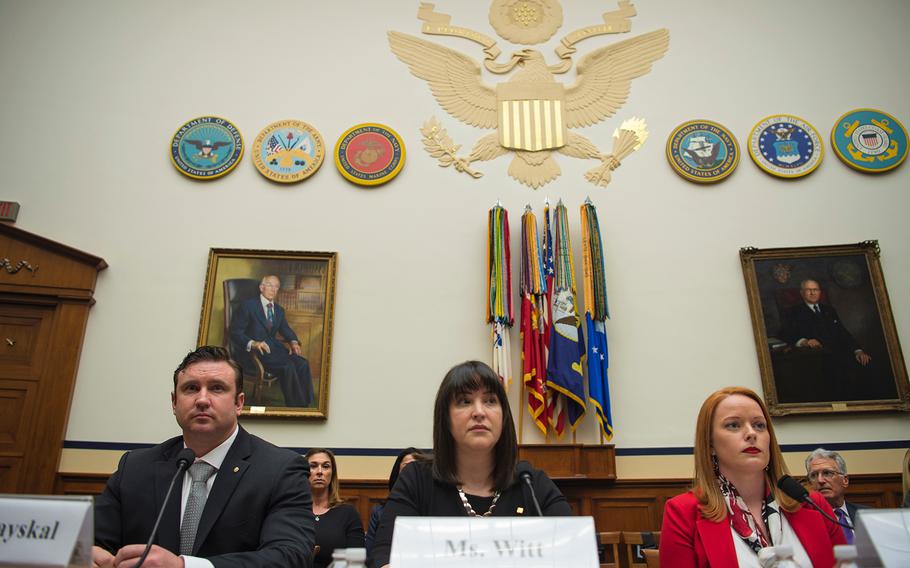 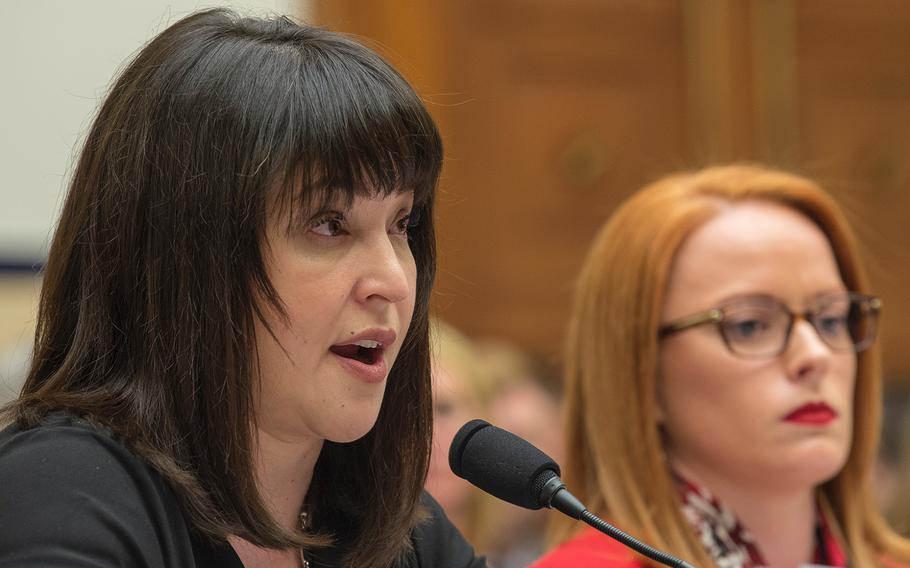 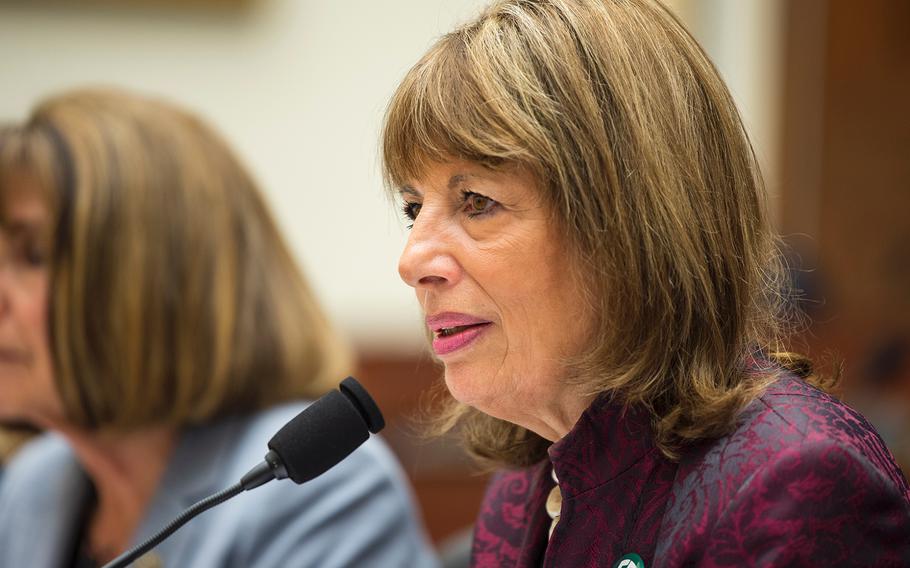 These are samples of medical cases gone awry under the care of military doctors.

But it doesn’t stop there: Patients and their families aren’t allowed to sue for medical malpractice. A special legal shield, known as the Feres Doctrine, blocks military servicemembers and their relatives from seeking recourse in court.

“The hardest thing I have to do is explain to my children when they ask me, ‘This doesn’t make sense, how is this happening?’ And I have no good answer,” Army Sgt. 1st Class Rich Stayskal, who is battling terminal Stage IV metastatic lung cancer, said Tuesday in congressional testimony. “I say ‘That’s why I am coming up here to help convince these folks in Congress to change this.’ This doctrine has effectively barred hundreds of servicemembers and their families any chance to be made whole for receiving negligent medical care.”

Stayskal was one of several witnesses called before a subpanel of the House Armed Services Committee to recount their stories of military medical care.

In Stayskal’s case, doctors missed signs of his cancer for months, until finally catching it in 2017. It’s since spread to his neck, lymph nodes, spleen, liver, spine, hip joint and other areas of his body.

Now, the Green Beret with 17 years of service is being separated from the military.

“The failure to detect my cancer … is a mistake that allowed an aggressive tumor to double in size and rob me, rob my life of my family, without any recourse,” Stayskal told members of the subpanel on military personnel issues. “My children are definitely the true victims, along with my wife.”

Following Witt’s appendectomy at Travis Air Force Base in California, a nurse administered a lethal dose of fentanyl and incorrectly inserted a breathing tube into his esophagus. Witt subsequently suffered from respiratory and cardiac arrest and died after being left in a vegetative state for three months.

Witt’s wife said the same nurse was linked to at least three other deaths, including one before her husband died.

“If the appropriate action had been taken on this nurse during her first lethal, negligent episode, Dean would still be alive today,” Witt told lawmakers.

Despite his terminal illness, Stayskal has lobbied Congress for months, between bouts of chemotherapy, to reverse the Feres rule, inspiring Rep. Jackie Speier, chairwoman of the House Armed Services subpanel, to call for Tuesday’s hearing.

Speier, D-Calif., said servicemembers deserve the same right to sue their medical providers as their spouses, other federal workers and even prisoners can.

“When our servicemembers suffer from medical malpractice — when doctors fail to perform or woefully misread tests, when nurses botch routine procedures, when clinicians ignore and disregard pain — servicemembers deserve their day in court,” Speier said. “When lives are disrupted, ruined, and cut short by negligence, servicemembers deserve a chance to receive just compensation.”

Rep. Trent Kelly of Mississippi, the panel’s ranking Republican member, urged the House Judiciary Committee to address the Feres Doctrine issue since it is under that panel’s jurisdiction. He also said ongoing revisions to the military health care system could address a series of new fixes.

“Our servicemembers, who sacrifice so much, deserve the best medical care that we can provide,” Kelly told the servicemembers and relatives. “And we as an institution let you down.”

The Feres Doctrine can be traced back to1950 when the Supreme Court issued a ruling in Feres vs. the United States. Four years earlier, Congress had enacted the Federal Tort Claims Act allowing for citizens to sue the government for damaging acts of negligence. However, the court in 1950 — combining three cases of harmed servicemembers — determined the act was not applicable for military members “in the course of activity incident to service.”

Since then, the court has interpreted the Feres Doctrine to mean that no active-duty servicemember can sue the federal government regardless of the circumstances.

“In our country, we rightfully revere servicemembers for their bravery and sacrifice,” Speier said. “It is disrespectful and shameful that for 69 years Congress has refused to give them the same rights as everyone else.”

'I was suicidal' Rebecca Lipe, a former Air Force judge advocate general, was left with debilitating abdominal pain, 10 related surgeries and permanent damage to her reproductive organs after wearing ill-fitting body armor during a 2011 deployment in Iraq.

Initially, doctors accused her of having an extramarital affair and contracting sexually transmitted diseases, Lipe recalled. That was followed by a series of medical mistakes, unnecessary surgeries and an ordeal that would consume her health and family for years to come.

“I was suicidal,” she told lawmakers Tuesday.

Eventually, Lipe, who now works as a civilian, saw doctors in private practice who diagnosed her with injuries connected to her ballistic gear worn during deployment. The private doctors were able to correct eight areas of damage along her abdominal wall.

“The civilian doctors …attempted to reverse the unnecessary medical treatment I received at the hands of the military medical providers,” Lipe said. “But the damage was already done. I now deal with chronic abdominal pain and complications due to that medical treatment.”

Lipe and her husband could no longer conceive a child as a result of the damage, and underwent seven rounds of in vitro fertilization at a cost of $60,000. However, Lipe was still under military care when doctors at Andrews Air Force Base in Maryland missed her ectopic pregnancy, which resulted in an emergency surgery and loss of her fallopian tube.

Following a subsequent miscarriage, Lipe had to wait four days for Walter Reed National Military Medical Center in Bethesda to remove the remains rather than undergo an emergency procedure immediately. Then, the hospital lost the remains of the baby, Lipe said.

After she left the Air Force, the couple saw a civilian doctor for a sixth round of IVF. Lipe finally delivered a healthy baby girl in July 2017.

“I received a level of care I had never received while on active duty,” she said.

During a final round of IVF, Lipe suffered near-fatal complications and can no longer have children.

Supreme Court The Feres Doctrine could also come before the Supreme Court in the near future. The court could soon decide whether it will hear a petition tied to a military medical malpractice case that looks to overturn the rule that bars servicemembers from suing the government.

The petition is tied to the death of Navy Lt. Rebekah Daniel, who died after childbirth at Naval Hospital Bremerton in Washington state in 2014. Her husband, Walt Daniel, filed the petition targeting the Feres rule.

Rebekah Daniel, a labor and delivery nurse at the same hospital who was known as Moani, bled to death after giving birth to a baby girl, Victoria.

Daniel’s Supreme Court petition was filed in October after the 9th U.S. Circuit Court of Appeals upheld a district court dismissal of the case. In the Supreme Court petition, Daniel’s attorney argued she was not engaged in her military duties at the time of her death or while she was being treated at Bremerton.

As Daniel and others have learned, there are only two paths to changing the Feres Doctrine: the Supreme Court or Congress.

“This isn’t just a matter of justice,” Speier said. “It’s a question of accountability. Because behind the shield of Feres, DOD’s health providers act with impunity.”