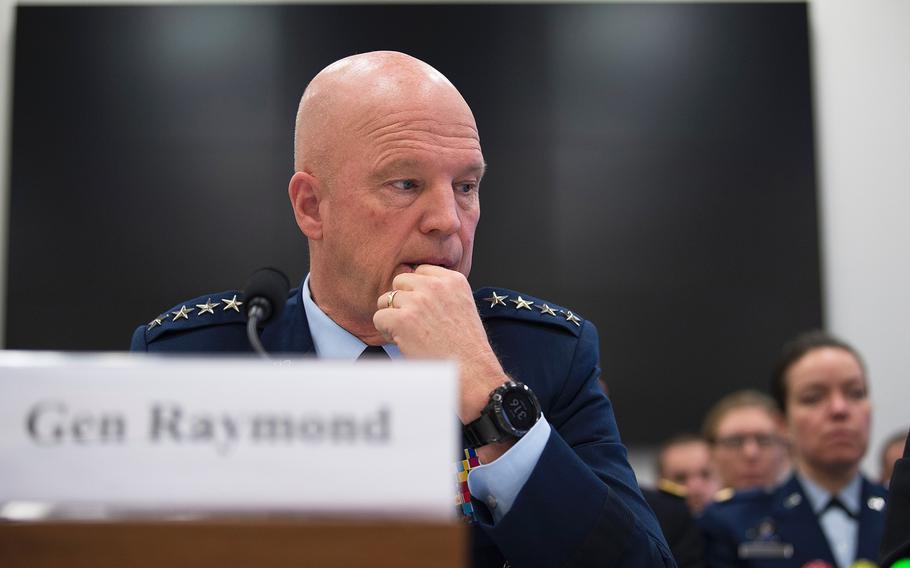 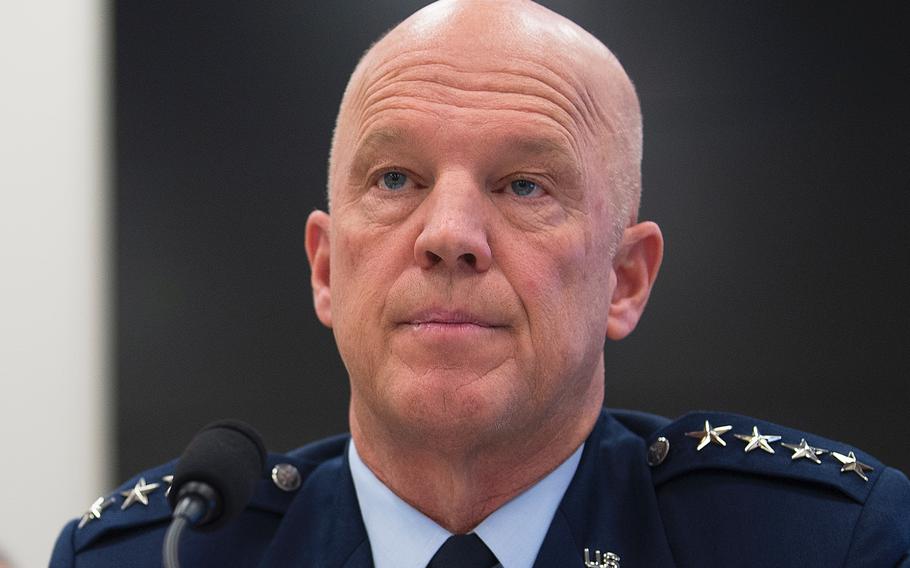 WASHINGTON — The coronavirus pandemic has delayed the planned doubling in size of the U.S. military’s newest branch though Space Force has conducted critical missions amid the global crisis, its first general said Friday.

Gen. John Raymond, the chief of space operations and Space Force’s sole official member, told reporters Friday that coronavirus-related global travel restrictions on the military have forced him to delay swearing-in his senior enlisted adviser. Air Force Chief Master Sgt. Roger Towberman was expected to be sworn in as the second official member of the Space Force late this month, but it has been indefinitely delayed by the distance between the two leaders.

“We’re going to swear Chief Master Sgt. Towberman into the Space Force,” Raymond said during a news briefing from the Pentagon. “The challenge is he’s in Colorado and I’m here.”

Despite that delay, Raymond played down other impacts the pandemic has had on the building of his new service as Space Force nears its 100th day, which will be Monday. Even if Towberman’s swearing-in is delayed for months, the general said, Space Force will grow in May when it adds some 64 new second lieutenants set to graduate from the U.S. Air Force Academy.

About 16,000 individuals — a combination of Air Force uniformed personnel and defense civilians — are now temporarily assigned to Space Force to conduct space-related military missions. Many of those individuals will eventually transfer into the new service. Raymond said Friday that he did not believe the coronavirus outbreak would impact those moves, which are planned to transition several thousand Air Force members into Space Force later this year.

The space chief said his service has taken a variety of precautions to protect its force during the outbreak — social distancing, enhanced cleaning of work areas, and moving as many people as possible to telework. Three airmen assigned to Space Force have tested positive for the coronavirus, Raymond said. He said all of those individuals were based in Colorado, and they have been isolated from the rest of the force since testing positive. The airmen are among 343 American service members to contract the disease since the outbreak began, according to Pentagon data released Friday.

Even with those impacts, Raymond said operations conducted just this week prove the value of Space Force and the separate U.S. Space Command, the combatant command that controls all military space-based missions. Space Command is also commanded by Raymond.

Space Force on Thursday conducted its first space launch — sending an Advanced Extremely High Frequency, or AEHF, communications satellite into orbit from Cape Canaveral Air Force Station in Florida. The service took precautions to protect its people from contracting or spreading coronavirus during the mission, including closing the launch to the public.

“We are safely and effectively conducting our missions,” Raymond said. “I would use the launch of a communications satellite to underscore the important role that space plays in support of our national defense, especially at times when communication and information is critical.”

Space Command officials have been helping broaden communications for another critical military mission, the general said. Those personnel worked this week to increase communication bandwidth to help the Navy’s hospital ship USNS Mercy as it deployed from San Diego to Los Angeles to aid in coronavirus relief. The ship arrived in L.A. on Friday morning, where it will treat non-coronavirus effected hospital patients to lighten the burden on local hospitals.

Raymond said he expects to unveil in “the near future” items in which troops are particularly interested, including Space Force insignias and uniforms. The pandemic, he said, should not delay those announcements.

“There is not a more exciting place to be in the Department of Defense than in the U.S. Space Force right now,” he said.