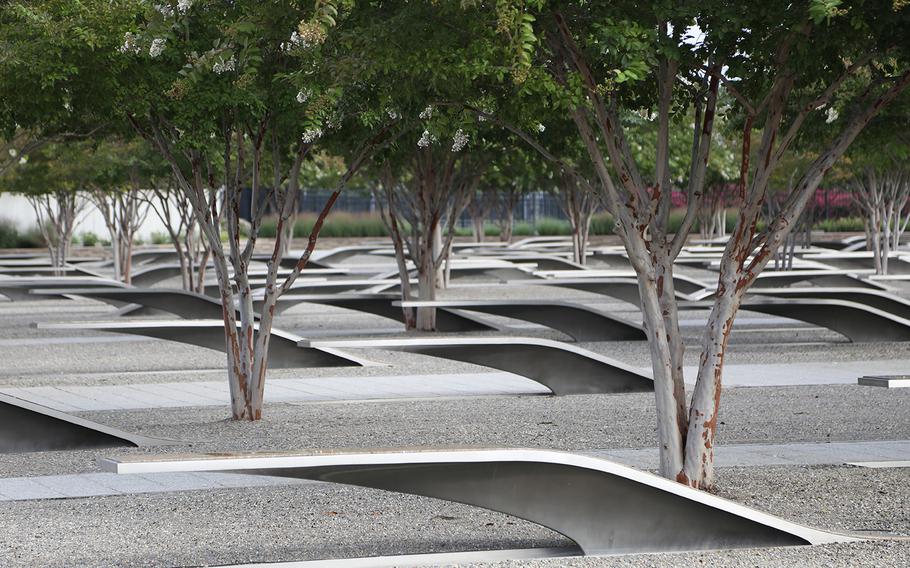 Buy Photo
The National 9/11 Pentagon Memorial is across the site of the attack on the Pentagon that occurred on Sept. 11, 2001. Each bench has the name of a person who died at the Pentagon. (Caitlin M. Kenney/Stars and Stripes)

Buy Photo
The National 9/11 Pentagon Memorial is across the site of the attack on the Pentagon that occurred on Sept. 11, 2001. Each bench has the name of a person who died at the Pentagon. (Caitlin M. Kenney/Stars and Stripes) 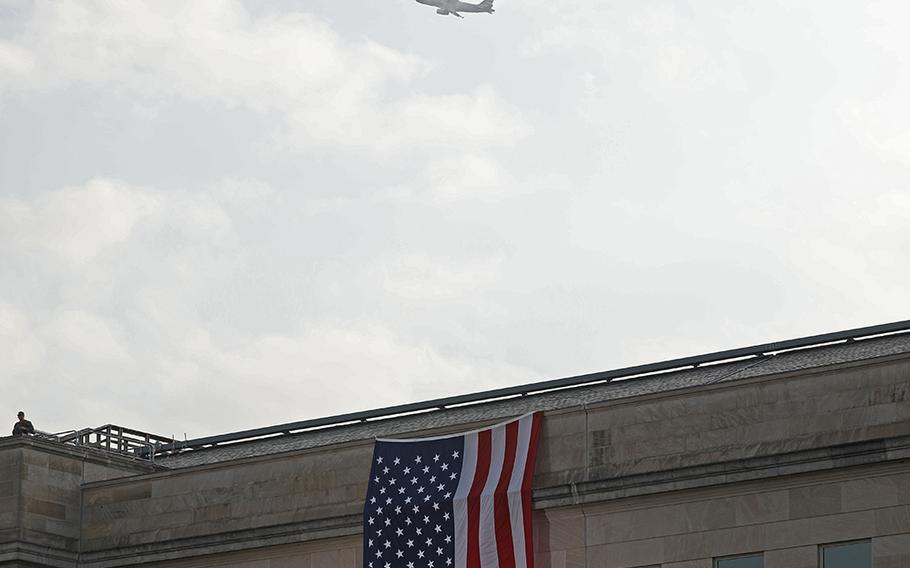 Buy Photo
A airplane flies above the site at the Pentagon where 19 years ago hijackers crashed American Airlines Flight 77 into the building, killing 184 men, women and children. The Pentagon held a 9/11 observance ceremony Friday Sept. 11, 2020, to remember the sacrifice of those lost in 2001. (Caitlin M. Kenney/Stars and Stripes) 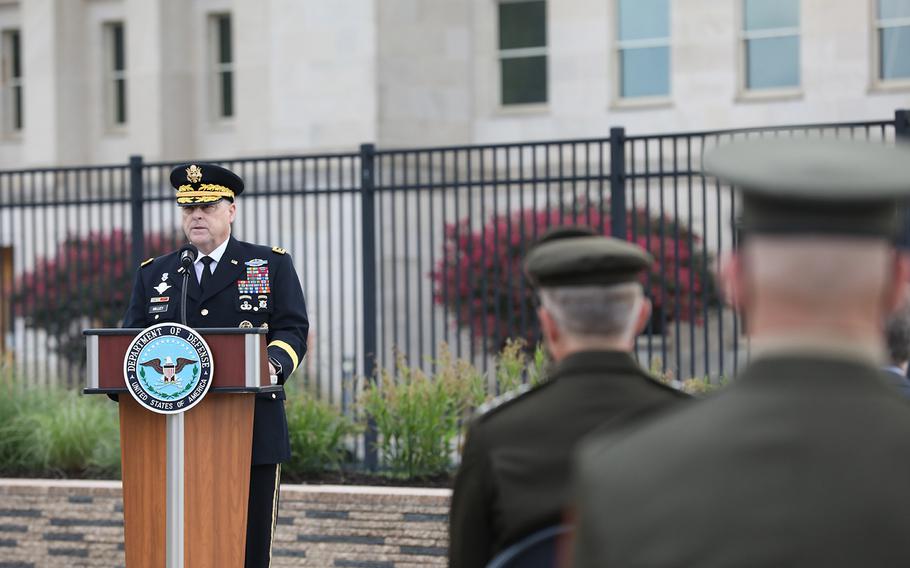 Buy Photo
Gen. Mark Milley, chairman of the Joint Chiefs of Staff, speaks during the Pentagon's 9/11 observance ceremony in the National 9/11 Pentagon Memorial located across from the site of the attack on Friday, Sept. 11, 2020. (Caitlin M. Kenney/Stars and Stripes) 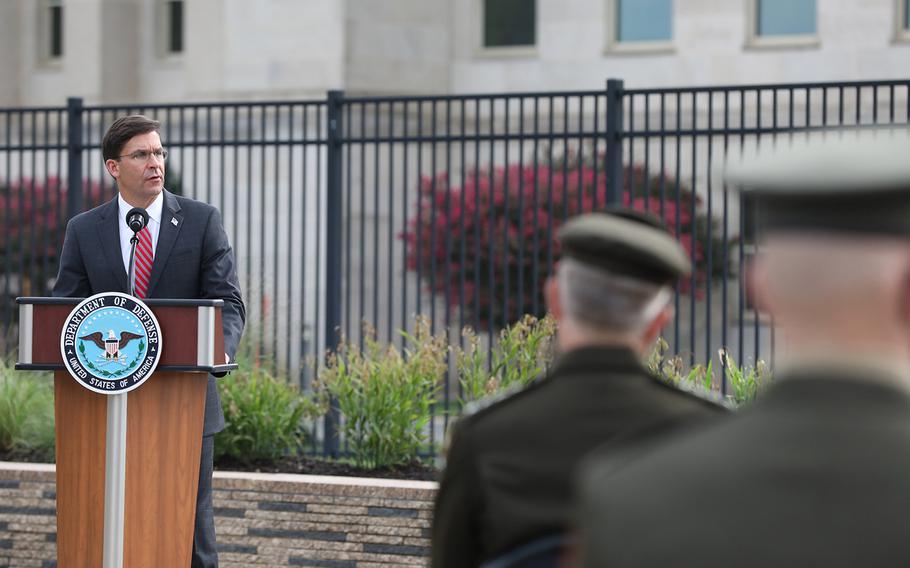 Buy Photo
Defense Secretary Mark Esper speaks during the Pentagon's 9/11 observance ceremony in the National 9/11 Pentagon Memorial located across from the site of the attack on Friday, Sept. 11, 2020. (Caitlin M. Kenney/Stars and Stripes) 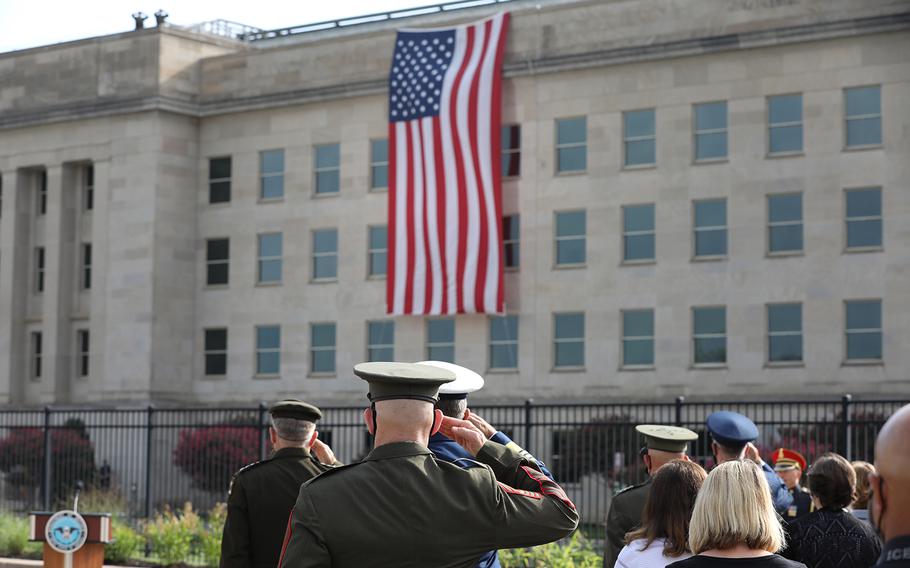 WASHINGTON — The Pentagon’s observance Friday of the 19th anniversary of the 9/11 attacks was smaller than in years past due to the coronavirus pandemic, however defense officials were still determined to remember the sacrifices and acts of heroism by people on that day.

A large American flag was draped over the side of the Pentagon where terrorists who had hijacked American Airlines Flight 77 on Sept. 11, 2001, crashed the plane into the building, killing 184 men, women and children.

Top military officials, service secretaries and defense civilians assembled wearing masks for the ceremony in the National 9/11 Pentagon Memorial located across from the site of the attack. This year, family members of those killed in the attack could not attend as a safety precaution because of the pandemic. The ceremony was broadcast live online.

Family members were expected to visit the memorial in small groups throughout the day, according to a Pentagon statement.

Army Gen. Mark Milley, the chairman of the Joint Chiefs of Staff, said during the ceremony that Sept. 11, 2001, was a typical morning at the Pentagon with personnel preparing for their day. But that changed in seconds.

“They were killed for what they believed in and for what they represented. But their memory and their legacy will live on as we honor and remember them all today,” he said.

The youngest person who died that day at the Pentagon was 3-year-old Dana Falkenberg of University Park, Md. She was on the plane with her mother, father and sister for a trip to Australia, according to the Pentagon’s memorial webpage.

The oldest was 71-year-old John Yamnicky Sr., a retired Navy captain from Waldorf, Md., who was also on American Airlines Flight 77 on the way to China Lake, Calif., to work on a missile program. He worked at the test center at Naval Air Station Patuxent River, Md., according to the memorial webpage.

The attacks were meant to disrupt the American way of life, the idea that “everyone of us is created free and equal,” Milley said. Instead, Americans came together and ran into the rubble and smoke to help find survivors, he said.

“Now almost two decades later, their legacy of service and sacrifice continues. Since 9/11, almost 3 million Americans have deployed overseas serving their country in the war against terrorism,” Milley said. “And nearly 6,000 have laid down their lives on the altar of freedom, for the principles that came under attack on that day.”

Defense Secretary Mark Esper also recognized the heroism and the efforts to save as many as possible from the burning building.

“In one account, intrepid Americans determined to save their colleagues rolled in pools of standing water to protect themselves from the intense fire and heat as they repeatedly rushed back into the burning rubble and smoldering ruins,” he said.

Esper also spoke of the service members who deployed around the world, including Iraq, Afghanistan and Africa, to stop terrorists and violent extremists after 9/11.

He also spoke directly to the families and friends who lost a loved one in the attacks.

“No words can ever soothe your grief. No act will ever replace your loss. No remembrance will ever fill that void. But please, please know that the men and women of the Department of Defense will always be with you as we give our sacred pledge that your loved ones will not have died in vain, so long as we stand watch over this great nation,” he said.

The ceremony ended with a moment of silence for the nearly 3,000 people who died on 9/11 and then the calling of taps.

The National 9/11 Pentagon Memorial is closed to the public due to the pandemic. It was also closed after last year’s anniversary for repairs to the lighting under the memorial benches and the entire electrical system.