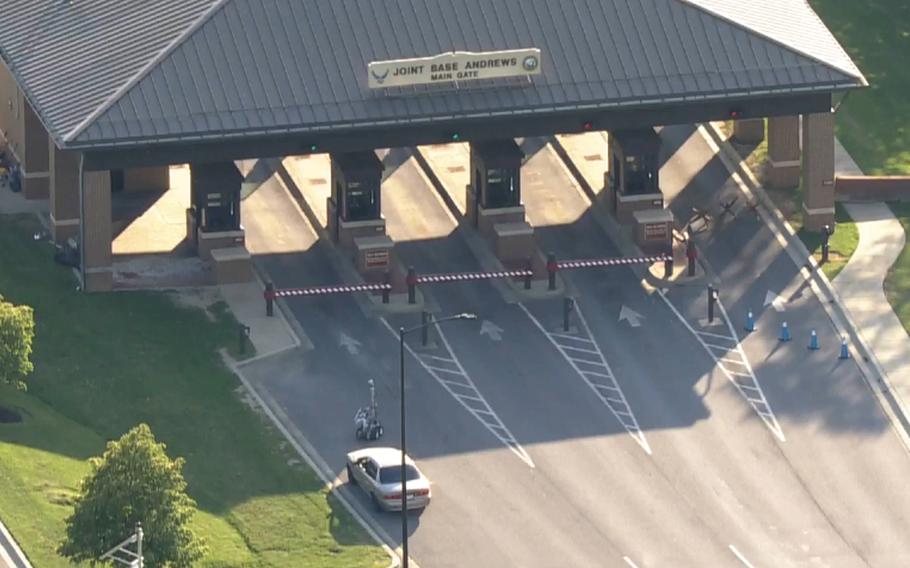 Aerial footage by 7News DC showed what appeared to be a remote-controlled bomb squad robot investigating a tan sedan parked about 50 feet away from the main gate of Joint Base Andrews, Md., at about 6:30 p.m. An Air Force explosive ordnance disposal truck was stationed nearby. (7News DC)

WASHINGTON — One person is in custody in connection with a bomb threat at Joint Base Andrews, Md., the home of Air Force One, the base said in a statement Friday.

The individual drove up to the installation’s main gate around 4:45pm and told base security forces that he had a bomb in his vehicle, said Zachary Baddorf, spokesman for the Air Force’s 316th Wing.

Base security forces shut down the main gate and cleared the area of all personnel, after which the individual — who officials say has no military ties — was questioned by base security forces and local law enforcement, according to the statement.

No explosive devices were found during several searches.

“Bomb sniffing military working dogs did an initial sweep of the vehicle and did not find anything relevant,” he said.

Aerial footage by 7News DC showed what appeared to be a remote-controlled bomb squad robot investigating a tan sedan parked about 50 feet away from the base’s main gate at about 6:30 p.m

Baddorf confirmed that a U.S. Air Force Explosive Ordnance Disposal team responded to the scene and deployed an EOD robot to examine the vehicle. A member of the disposal team also performed a manual search of the vehicle while wearing a protective suit.

The rest of the base remained operational during the searches, he said.

"We take every threat seriously," said Col. Tyler Schaff, commander of Joint Base Andrews and the 316th Wing, in an emailed statement. "Our team took every precaution to keep our airmen and their families safe."

Joint Base Andrews most recently made the news for a security incident on Feb. 4 when a civilian entered the base and accessed a military aircraft.

An Air Force inspector general investigation found that incident happened after a “distracted and complacent” airman guarding a gate improperly allowed the civilian to enter the base.

316th Wing operates and maintains Andrews, which is about 15 miles outside of Washington and home to the aircraft that routinely fly the president and other top U.S. officials.