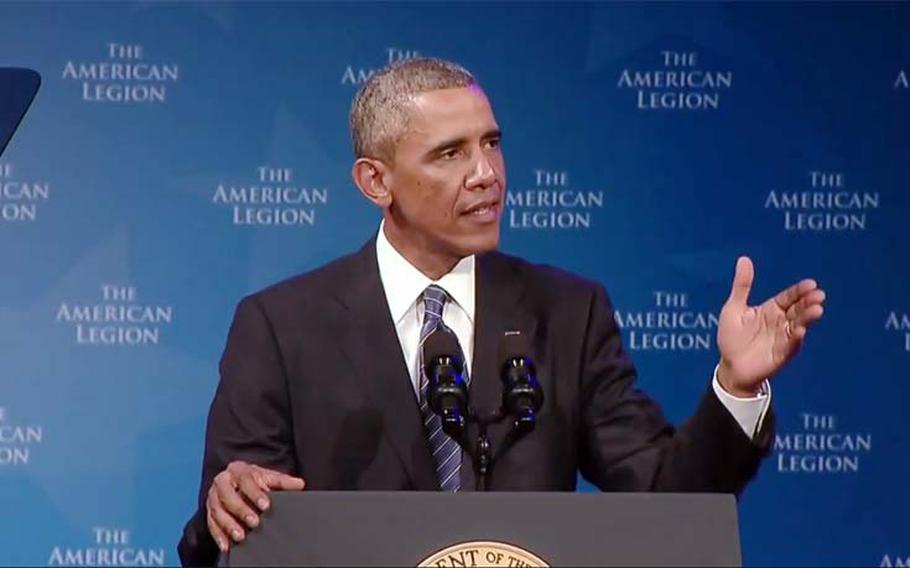 On the day a government watchdog issued a damning report on the troubled Veterans Affairs system, President Barack Obama and his new VA chief sought to reassure American veterans that the government is committed to taking care of them.

“What I want you to know directly from me is that we are focused on this at the highest levels,” Obama said Tuesday, addressing the national conference of the American Legion, the nation’s largest veterans group, in Charlotte, N.C.

The back-to-back speeches came just ahead of the release of a report from the VA Inspector General that said it is investigating cases at 93 VA health care sites, including some criminal investigations being coordinated with the FBI.

The Department of Veterans Affairs is scrambling to improve health care amid the ongoing scandal, which cost former VA Secretary Eric Shinseki his job. The department has been under fire since a whistleblower revealed that hundreds of patients at the Phoenix VA Health Care System had been sidetracked from care at VA hospitals, some dying while on long wait lists. Administrators had cooked the books to make it appear that patients were getting care more quickly — a problem identified throughout the nationwide VA system.

In response to the revelations, Congress passed a $17 billion bill last month enabling the VA to hire more doctors and nurses and making it easier to fire underperforming officials. An aspect of the scandal that brought particular outrage was that bonuses for VA officials were often based on improvements in patient wait times, creating an incentive to falsify data at underperforming centers.

“The systematic underreporting of wait times resulted from many causes, to include the lack of available staff and appointments, increased patient demand for services, and an antiquated scheduling system,” according to Tuesday’s inspector general’s report. “The ethical lapses within VHA’s senior leaders and mid-managers also contributed to the unreliability of reported access and wait time issues, which went unaddressed by those responsible.”

According to the report, investigators could not substantiate the most damning claim at the Phoenix VA –- that 40 patients died while waiting for appointments –- saying the whistleblower who made the allegation did not present them with names. However, the report did substantiate claims that facilities had falsified data, sometimes at the behest of management.

“Immediate and substantive changes are needed,” the report says. “If headquarters and facility leadership are held accountable for fully implementing VA’s action plans for this report’s 24 recommendations, VA can begin to regain the trust of veterans and the American public.”

In his speech Tuesday, Obama said he will issue 19 executive orders, including automatically enrolling troops leaving the service in a mental health program and expanding research and services for traumatic brain injury and post-traumatic stress disorder, two of the most common injuries for veterans. He affirmed his commitment to root out poor-performing officials, a key demand of veterans’ groups.

“If you engage in unethical practices or cover up a serious problem, you should be and will be fired,” he said.

From the announcement dc.embed.loadNote('//www.documentcloud.org/documents/1280094-vaobama/annotations/174508.js');Obama also laid out five priorities for taking care of troops and veterans that included increasing funding for health care, tackling an epidemic of suicide, eliminating the VA backlog, decreasing veterans homelessness and making it easier for servicemembers to buy homes. The speech came shortly after the VA released numbers saying that homelessness among veterans was down 33 percent since 2010.

“The American people have to know that even as our war in Afghanistan comes to an end our obligation to this generation has just begun,” he said.

Newly appointed VA chief Bob McDonald, who has been traveling the country to speak to veterans since starting the job less than one month ago, also took the floor of the American Legion conference. He laid out a multi-step plan to improve service at health facilities, including an updated scheduling system and a recruitment drive to fill doctor vacancies, as well as the establishment of a board of medical professionals to advise him on best practices.

McDonald said the VA is committed to removing those responsible for the current crisis. He said that two senior VA officials have retired or resigned, three have been placed on administrative leave pending investigations, and more than two dozen health-care workers were removed.

“The truth of the matter is that we’ve failed in a number of ways,” he said. “We need to do better, much better.”

Veterans groups reacted to the speeches with cautious optimism.

In a released statement, Paul Rieckhoff, the CEO and founder of Iraq and Afghanistan Veterans of America, praised Obama’s announced executive actions, but warned that addressing problems with veteran’s care “can’t be just a one-off event or speech filled with more promises.”

“These are, however, small steps on the very long road to fully supporting our community and reestablishing trust in the VA,” he said. “Announcements and promises are easy, and we’ve been here many times before.”

Veterans of Foreign Wars National Commander John Stroud said in a press release he is “hopeful that the initiatives announced by President Obama today will provide the necessary course corrections” to improve VA service.

“Washington cannot solve every problem veterans face, but Washington can help pave the way for veterans to better transition back into their local communities,” according to the statement. “The VFW looks forward to working with new VA Secretary Bob McDonald and his staff to end this nationwide crisis in care and confidence, and we hope the president’s new initiatives will provide the necessary course corrections the VA urgently needs to properly care for our nation’s veterans.”

Stars and Stripes reporter Travis Tritten contributed to this report.