Nonprofit steps in to aid military death benefits during shutdown 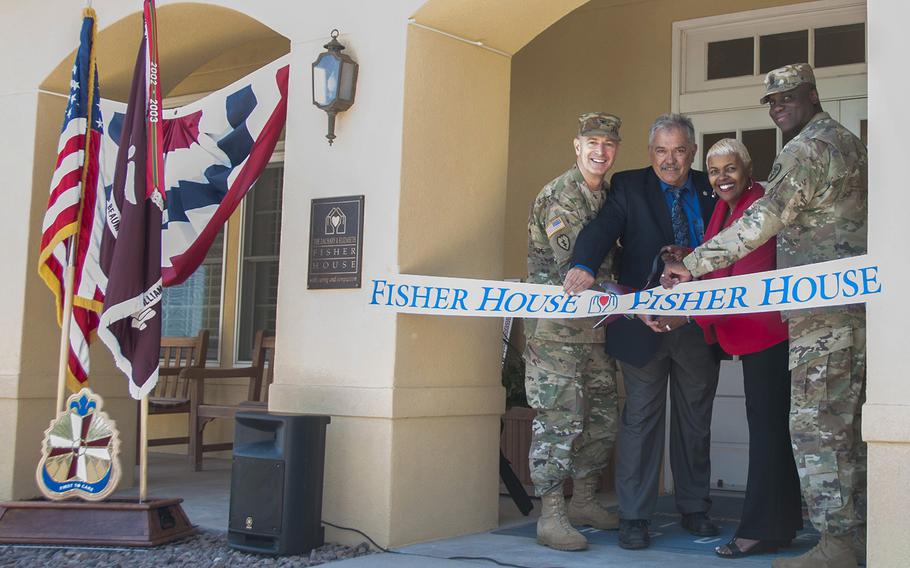 From left, Col. John A. Smyrski III, commander of William Beaumont Army Medical Center; John Ost III, director of the Army Fisher House Program; Alice Coleman, manager of WBAMC Fisher House; and Command Sgt. Maj. Donald George of WBAMC cut the ribbon to the newly renovated Fisher House on the WBAMC campus in El Paso, Texas, on May 12, 2017. The Fisher House provides military-affiliated families room and board at no cost throughout the duration of care for inpatient servicemembers, retirees or veterans at nearby health care facilities. (Marcy Sanchez/William Beaumont Army Medical Center)

WASHINGTON — The families of two U.S. soldiers killed in a helicopter crash Saturday will get death benefits from an area nonprofit, despite the government shutdown. Fisher House Foundation in Rockville, Md., which helped Gold Star families who lost benefits during the 2013 shutdown, is stepping up again.

“Families like the ones we helped in 2013 are very deserving. They are deeply dedicated to overcoming the challenges they confront,” Ken Fisher, chairman and CEO of his family’s nonprofit, said in a statement Saturday. “Helping them isn’t charity but rather this nation’s solemn duty. In these very tough situations, they don’t quit. Neither should we.”

Families of the two soldiers killed in Fort Irwin., Calif., should be eligible for the help. The government’s death benefit program for servicemembers includes an immediate $100,000 payment to each military family. The program is halted during a shutdown, along with other funds that cover funeral, burial and related travel expenses as well as a temporary housing allowances.

“Government rules and regulations can often prevent it from doing what is best for our military,” Fisher said. “A perfect example of this occurred during the 2013 government shutdown when the (Department of Defense) could not pay the benefits earned by servicemembers through their ultimate sacrifice.” In 2013, the Fisher House provided $750,000 in grants to 30 families during the 16-day shutdown.

On Friday, Sen. Joe Manchin, D-W.Va., reached out to Fisher, and the nonprofit agreed to offer the families an advance grant until the government can make reimbursements, Manchin’s office said. The Fisher House will also cover flights, hotels and other incidentals for family members at a time of “unfathomable loss,” his office said.

“I applaud Ken and the Fisher House for their dedication to serving our soldiers and their families during their time of need and especially as this senseless shutdown looms,” Manchin said ahead of Saturday’s shutdown. “It’s shameful that our military families could bear the consequences of this shutdown.”

In October 2013, the families of four soldiers who were killed in combat in Afghanistan didn’t see the death benefits for days, forcing them to alter plans to meet the bodies of their slain relatives at Dover Air Force Base in Delaware.

Such incidents triggered an angry backlash from the military and their supporters as well as congressional promises to rectify the problem. But there’s been no legislation to fix it, and supporters of Gold Star families are worried about a repeat of such ordeals.

“These families have to deal with the tragic loss of their loved ones as well as suffer the loss of the monetary support for our government when they need it the most,” said Keith Humphrey of Kansas, a Navy veteran and father-in-law to a fallen Marine Corps servicemember who has been working on a legislative fix.

Humphrey’s family received their death benefit immediately, but he was angered when he heard of the 2013 cases and it inspired him to get involved. Humphrey has since made it his life mission to close the gap in coverage.

The news of the shutdown, followed by the Fort Irwin deaths, “is like a shot to the gut,” he said. “It immediately took me back to relive the day my son-in-law was killed. The death gratuity payment that (proposed legislation) secures during a government shutdown won’t be paid -- this bill should have been passed a long time ago.”

“What happened during the 2013 shutdown was shameful,” Connolly said in December. “With the near quarterly threats of a government shutdown, enacting the Families of Fallen Servicemembers First Act is more important than ever.”

Humphrey since pushed for the federal government to follow suit. This year, Humphrey has helped Connolly’s legislation reach its 108 cosponsors – about one-quarter of the House.

A cost estimate maybe hurting the bill’s chances. In 2013, the Congressional Budget Office, which evaluates and estimates the cost of legislation, gave a similar plan a $150 million price tag.

Supporters of a permanent fix have said the estimate is too high, and seems to assume the government would remain in shutdown mode in perpetuity.

While the shutdown doesn’t impact insurance-related death payments – such as ones from the Servicemember’s Group Life Insurance program – those funds can take weeks to reach families.

More than halfway through the October 2013 shutdown, the Pentagon struck a deal with Fisher House to provide the benefits to families of the fallen as a contractor.

“I am offended, outraged, and embarrassed that the government shutdown had prevented the Department of Defense from fulfilling this most sacred responsibility in a timely manner,” Defense Secretary Chuck Hagel said at the time. “In the days before the shutdown, we warned Congress and the American people that DOD would not have the legal authority to make these payments during a lapse in appropriations.”

“We have to learn from our mistakes. Too often history repeats itself and we need to make sure that is not the case,” Fisher said last month. “It’s not just about making sure the death benefits are paid, it’s honoring the sacrifices these people have made.”