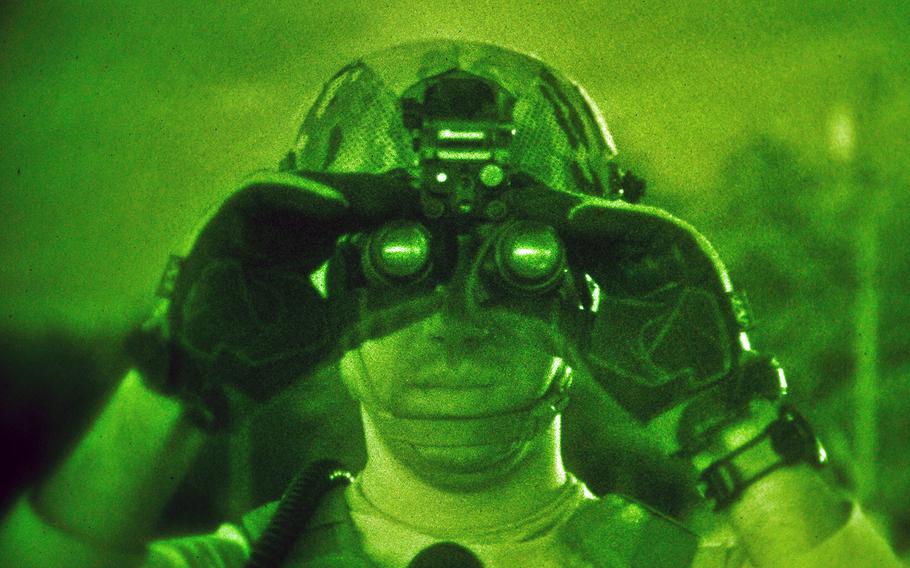 An Air Force officer adjusts his night vision goggles on April 10, 2014, at Fort Dix, N.J. On Thursday, Aug. 28, 2014, the Air Force said it beefed up the aerial search for a missing pilot with the addition of an HC-130 aircraft specially equipped for low-light and nighttime search and rescue missions. (Matt Hecht/U.S. Air Force)

WASHINGTON — The Air Force beefed up the aerial search for a missing Massachusetts Air National Guard fighter pilot in the early morning hours Thursday with the addition of an HC-130 aircraft specially equipped for low-light and nighttime search and rescue missions.

Several helicopters also combed the heavily forested area of western Virginia where his plane went down early Wednesday. The helicopters were called in after searchers struggling on the ground found conditions too treacherous to continue, military and law enforcement officials said.

The pilot, who has not been identified by the 104th Fighter Wing, based in Westfield, Mass., radioed air traffic controllers about a problem with his F-15C fighter at about 9 a.m. Wednesday.

The plane, which was being flown to Naval Air Station New Orleans for a radar upgrade, crashed in a national forest area minutes later, leaving a sizable crater, Virginia police authorities said.

Reports that a witness saw the pilot eject and a parachute open could not be confirmed, Col. James Keefe, commander of the fighter wing said Wednesday.

The Air Force has secured the crash site, and representatives from a host of other local agencies were on hand, officials said, including the Virginia National Guard, the Augusta County sheriff and fire officials, the Virginia Department of Game & Inland Fisheries, the FBI and the US Forest Service.

At least 100 searchers in vehicles, helicopters and on foot combed areas near the site, located on a level area next to a mountain known as Elliott Knob. As darkness fell Wednesday, searchers switched tactics because of the hazards of operating in the remote area.

“Search crews on the ground are conducting ‘hasty searches,’” Virginia State Police spokeswoman Corinne Geller said in an emailed statement to the media at about 10 p.m. Wednesday. “These are searches along logging roads, fire trails, forest roads, etc. This is for the safety of the search crews, as the off-road terrain in the George Washington National Forest is too rocky, wooded and steep for navigation in the dark.”

The search on the ground was called off after midnight but was to resume at 8 a.m. Thursday, Geller wrote.