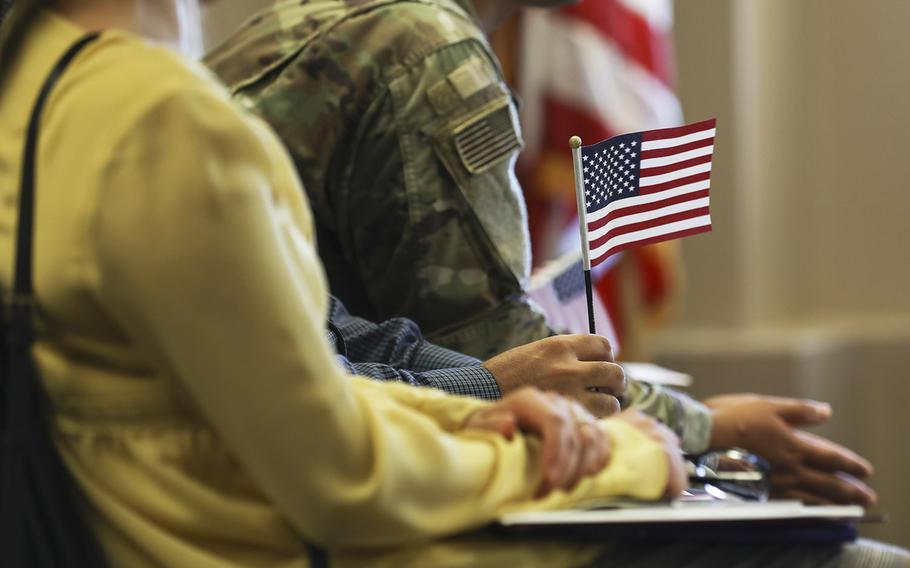 A U.S. flag is held during a naturalization ceremony at the Army Community Services on Fort Carson, Colo., Sep. 20, 2019. (Sidnie Smith/U.S. Army)

WASHINGTON — Military children who are not U.S. citizens and live overseas with their American parents are finally able to obtain citizenship automatically now that a new law is being implemented by U.S. Citizenship and Immigration Services, which had changed the policy last year.

USCIS announced Friday that it had updated its policy to implement the Citizenship for Children of Military Members and Civil Servants Act, almost a year after the agency had changed how it determined the residency requirement for children living overseas. It forced military families to file new paperwork and pay more fees to gain citizenship for their child.

Military children younger than 18 years old who are not citizens are able to acquire automatic citizenship under Section 320 of the Immigration and Nationality Act, according to the new law, which was passed in March. The section states a child who was born outside the United States can automatically become a citizen if they are physically living in the United States with their parent who is a citizen. USCIS will again consider military children who are living with an American parent stationed overseas to be considered as residing within the United States.

These military children “are just as worthy of automatic citizenship as any other children,” Sen. Tammy Duckworth, D-Ill., said in a statement Tuesday about the new policy. She sponsored the Senate’s version of the Citizenship for Children of Military Members and Civil Servants Act.

“Forcing military families to jump through bureaucratic hoops and spend hundreds of dollars applying for citizenship on behalf of their children was not right, which is why I’m glad that this bipartisan bill to ensure that children of U.S. servicemembers and civil servants abroad automatically gain citizenship is now in effect,” Duckworth said.

The reason that the USCIS gave for changing the policy was the agency was clarifying two conflicting rules about the definition of “residence,” and issued the new guidance that military children would no longer be considered as residing in the United States, one of the ways for anyone born overseas to obtain citizenship automatically.

The change caused widespread confusion about what it actually meant and who was affected, with some initial reporting interpreting the policy to mean that military children were being denied citizenship. The law passed in March was aimed at resolving the issue and stating military children living overseas should be considered as residing in the U.S. for obtaining citizenship.

With the implementation of the law, USCIS is applying the new policy change to eligible children who were younger than 18 years old on March 26, according to the statement.