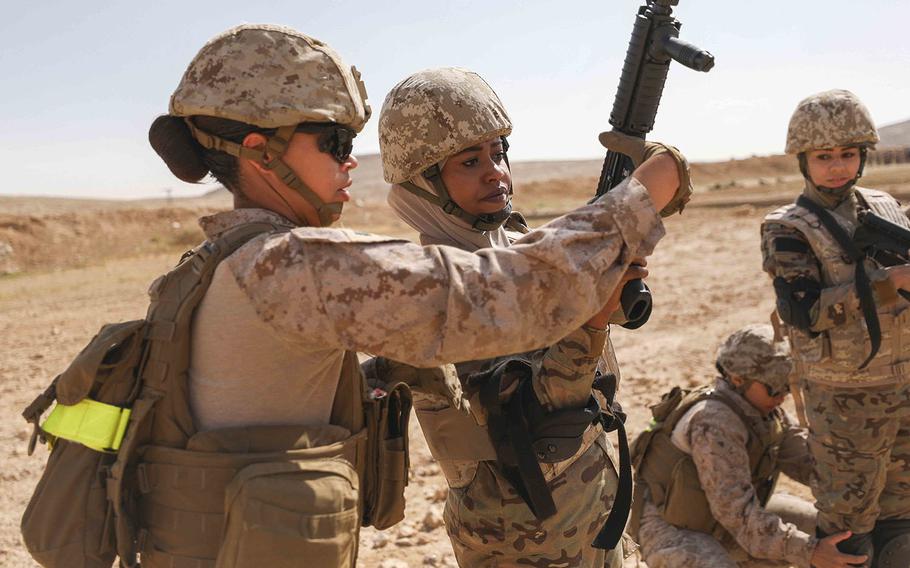 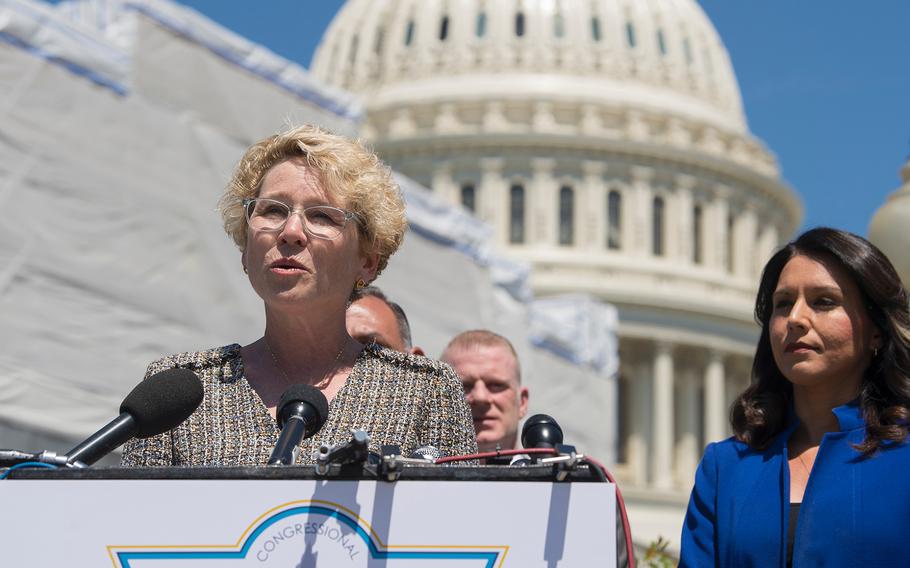 Former Air Force officer Rep. Chrissy Houlahan, D-Pa., announces the launching of the Servicewomen and Women Veterans Caucus that will focus on women's issues in the military. Army National Guard officer and caucus co-founder Rep. Tulsi Gabbard, D-Hawaii, looks on at right during the ceremony outside the U.S. Capitol in Washington on Wednesday, May 15, 2019. (Carlos Bongioanni/Stars and Stripes)

WASHINGTON — Female servicemembers and veterans are the focus on a new congressional caucus launched Wednesday on Capitol Hill.

Reps. Chrissy Houlahan, D-Penn., Tulsi Gabbard, D-Hawaii, Elaine Luria, D-Va., and Mikie Sherrill, D-N.J., kicked off the new initiative that they say will be one of a kind and support the fastest growing segment of the military.

Houlahan, an Air Force veteran elected to Congress in November, is the chairwoman of the new House Servicewomen and Women Veterans Congressional Caucus, which now numbers about 50 members. Gabbard, Luria and Sherrill will act as vice-chairs.

“More and more women are hearing the same call …the call to serve,” Houlahan said. But “despite the increased presence across the branches of the military… many women are still struggling with many of the same issues, including access to quality and affordable child care.”

The lawmakers, also joined by Reps. Don Bacon, R-Neb., and Gil Cisneros, D-Calif., who are also veterans, and retired Army Col. Ellen Haring, CEO of the nonprofit Service Women’s Action Network, made the announcement near the steps of the Capitol.

Caucus leaders said they want to focus on growing issues facing female servicemembers and veterans today, from concerns of reports of increased sexual assaults in the ranks to more women serving in combat to health care.

“We have a mission, we have our marching orders,” Houlahan said. “I won’t stop fighting until our mission is accomplished.”

Gabbard said since she was elected seven years ago, the ranks of women in the military has grown dramatically and together the new caucus brings a new perspective to servicewomen’s needs on and off the battlefield.

“There have been and continue to be obstacles placed before our female servicemembers and veterans. To address these obstacles, we’ve got to look at the complete arc of the experience of women who serve, from the point where they are recruited to going through training to their time in service, both here at home and abroad through separation as well as veterans,” said Gabbard, a member of the House Armed Services Committee. “Our caucus will serve as the tip of the spear in being their voice and making sure that progress continues.”

The group formed the caucus “because we didn’t want to be the last people to fill these shoes,” said Luria, a Navy veteran and another member of the House Armed Services Committee. “We are here to stand behind those young women, those women currently serving and those female veterans to make sure that the issues unique to their service as women are looked after and that we are their strongest advocate.”

Experts have said the new members built upon the recent successful 2016 campaign of Sen. Tammy Duckworth, D-Ill., a veteran Army combat helicopter pilot who lost both legs, and Gabbard, a member of her state’s National Guard.

Wednesday’s move comes on the heels of a new “Service Women’s Victory Fund” launched last week to support the new congressional members win re-election to their seats in 2020.

All the women are Democrats and flipped seats in traditionally Republican districts.

At a meeting with reporters on Friday, the group pushed back against characterizations they were a pack, but instead a group focused on working together on issues critical to their constituents.

“People across the country need… a path forward promoting our values,” Sherrill said. “I think we are on shaky ground as a people.”