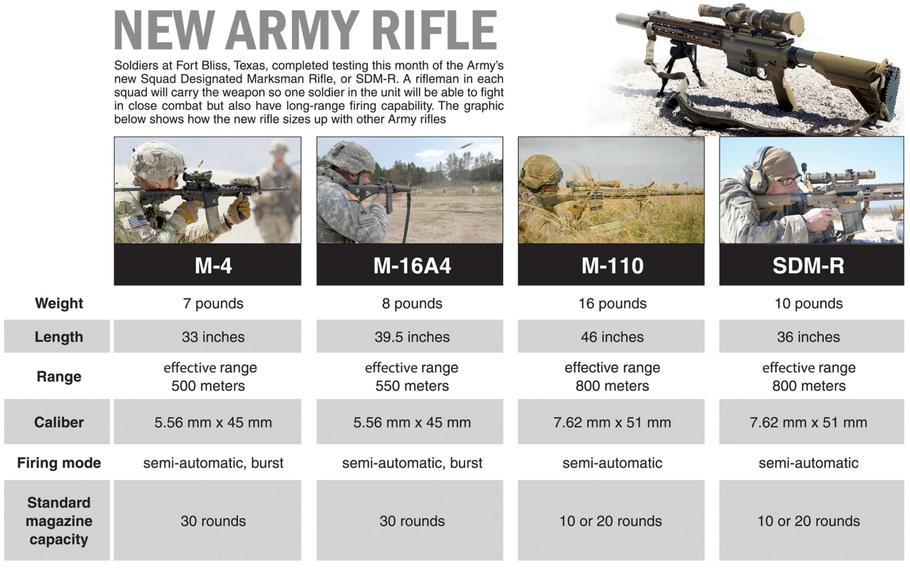 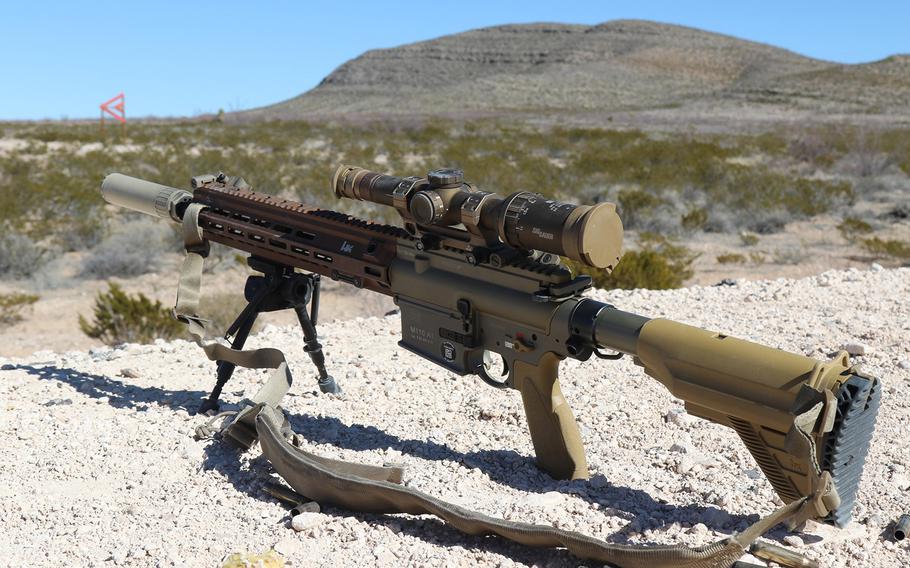 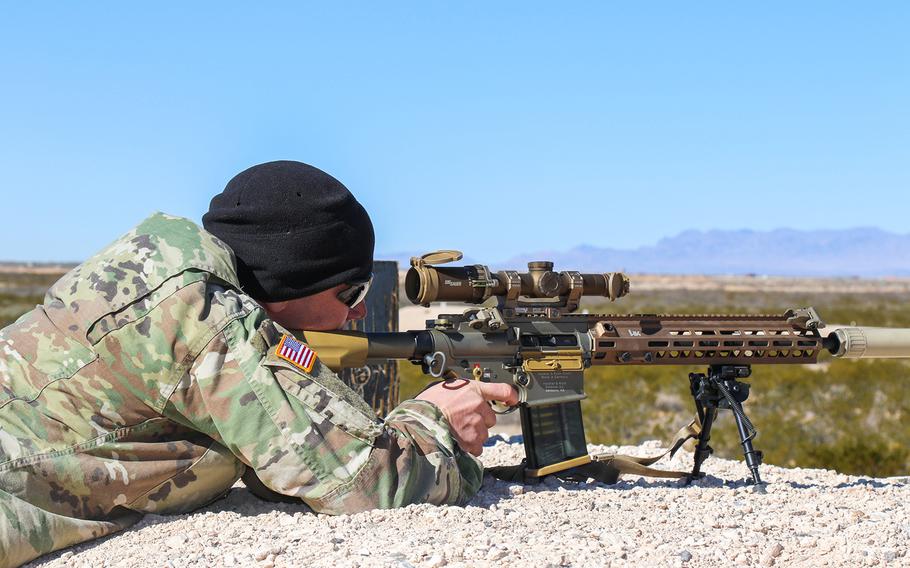 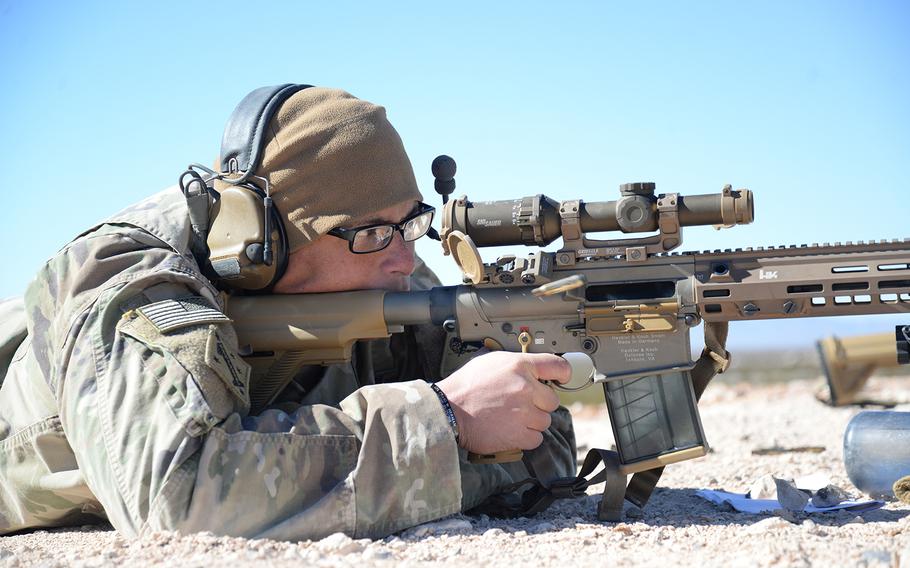 Army Sgt. James Snow has carried an M-4 carbine and an M-110 sniper rifle as an infantryman on missions. With the M-4, he knew he was capable of hitting a target accurately up to only 300 meters. With a sniper rifle, he had less maneuverability and spent a lot of time breaking down and reassembling the larger weapon to carry.

Last month, Snow was given the opportunity to try out the Army’s new Squad Designated Marksman Rifle, or SDM-R. After just a couple days handling the new weapon, he said it felt like something that could fill the needs of both his previous weapons. It had more mobility and close combat capabilities like the M-4, but also better precision at a distance like the M-110.

“It’s easy to move around, and you can do a lot of things with it,” Snow said. “Absolutely, I would carry this around every day if I was deployed. Every day, you could carry it for every single situation.”

That was exactly the type of weapon that the Army looked to create for its combat arms squads — a weapon for one member of an infantry, armor, cavalry scout or combat engineer squad to carry and provide precision fire between 300 and 600 meters without losing the capability of hitting closer-range targets.

The need for such a rifle was identified in the 2015 Small Arms Capabilities-Based Assessment that stated “squads must have an organic, precision-fire capability to engage select personnel targets from zero to 600 meters.”

With two weeks of testing completed this month at Fort Bliss, Texas, the Army is in the final stages of deciding what ammunition and accessories to field with the rifle. It will then purchase 6,612 for fielding with infantry, armor, cavalry scout and combat engineer units, said Capt. Sean McIntosh, assistant program manager of individual weapons, under Program Executive Office Soldier, which guides the development of new Army equipment.

“The challenge that we face is trying to provide as much capability as possible through one rifle system,” said McIntosh, who began assisting in management of the new rifle project in September 2017.

The new rifle doesn’t replace any one weapon within the Army but offers another capability to a squad. The designated rifleman, or marksman, within each nine-person squad now carries an M-16, or the enhanced battle rifle. That soldier’s weapon will soon be replaced with the new Heckler and Koch-made SDM-R. It weighs about 12 pounds with accessories, is 36 inches long and is based on the company’s compact semi-automatic sniper system.

McIntosh’s team also wanted to ensure the new rifle was something soldiers would want to carry.

“This system was completely built off what soldiers wanted. All the components on this rifle were hand-picked by soldiers,” said McIntosh, referencing feedback collected from soldiers about what they wanted in a new rifle. “We’re trying to do our due diligence to get these guys everything they’re asking for.”

Some of the soldier-chosen accessories include a Sig Sauer optic with a one-to-six variable for aiming the weapon at various distances, and Geissele brand rail and trigger systems.

Sgt. 1st Class Robert Shoup, assistant team chief for the instructor training group of the Army Marksmanship Unit at Fort Benning, Ga., traveled to Fort Bliss for the testing and will help prepare training manuals on the new rifle. He agrees it has strong potential to fill its multipurpose role for squads.

Squads, three of which make up a platoon, are typically divided into two teams. Within those teams, there is a soldier with a grenade launcher, another with a machine gun and a third who serves as the rifleman.

“The role of the [squad’s designated marksman] is to be an integral part of the squad, to move and fight with them, but he’s there to help them cover that gap between the rifleman and the sniper and to really provide that precision fire if they need it from that 300- to 600-meter range,” Shoup said.

As soldiers add those longer-range distances into operation, a solid foundation in the fundamentals is important, such as stance, breathing and environment, so there will be some new element of training required to transition soldiers trained on an M-4 to the new weapon. The M-4 is most effective with precision fire up to 300 meters.

“That’s a big challenge for this week,” Shoup said. “We work on fundamentals and extending and pushing out to those distances so that the guys get a chance to see that everything they do matters.

“A lot of them don’t have experience shooting past 300 meters because that’s what the Army goes out to.”

For Sgt. Marc Rittikaidachar, a cavalry scout and squad leader in Fort Bliss’ 1st Stryker Brigade Combat Team, 1st Armored Division, shooting the new rifle was the first time he’d fired at a target beyond 500 meters, with the exception of using a machine gun. After a couple of days with the SDM-R, he felt confident aiming out 700 and 800 meters.

Even so, Rittikaidachar said, “If I had to clear a compound, I’m not handicapping the ability of [the marksman] I assign to carry that weapon system. If I need him to help clear the compound, he’s still able to engage targets up close.”

Following their time with soldiers at Fort Bliss, McIntosh said, his team will take the collected data back and PEO Soldier will finalize decisions on ammunition and make any needed changes to the equipment fielded with the rifle before placing orders “very shortly.”

The entire process of selecting and fielding the rifle has taken about 10 months, significantly less time than the projected two years for a small-arms project like this, McIntosh said. Part of that speed is credited to the fact that the rifle was originally under consideration as a new sniper rifle. When it wasn’t selected, he said, officials saw the opportunity for its use with combat arms squads.