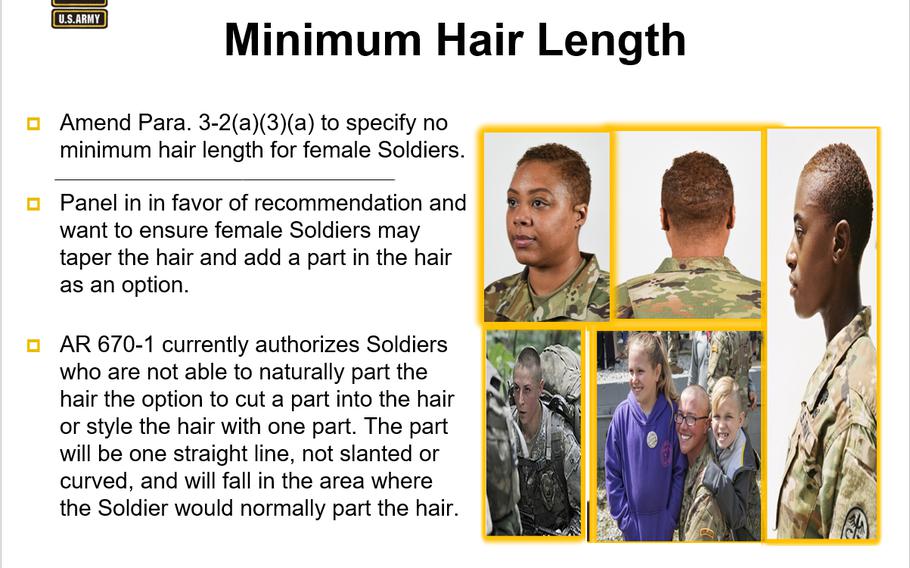 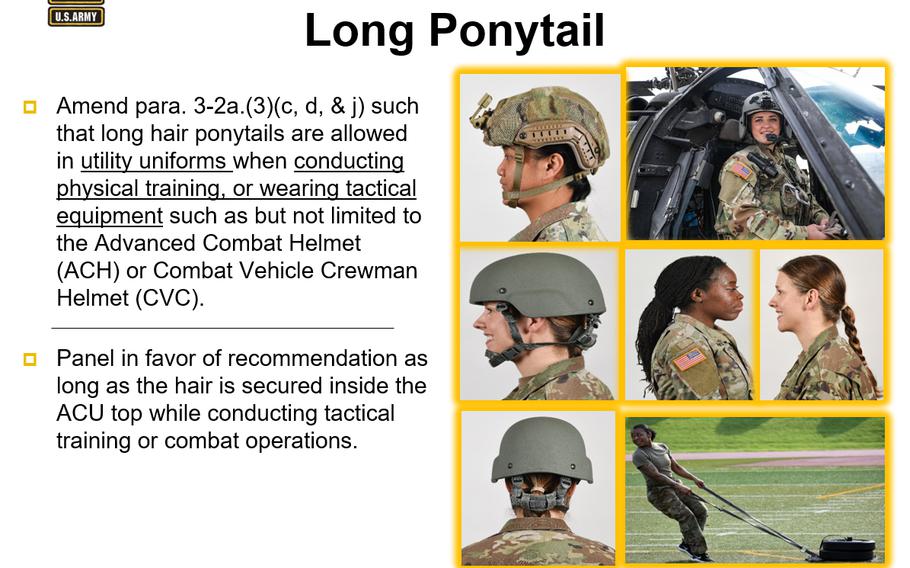 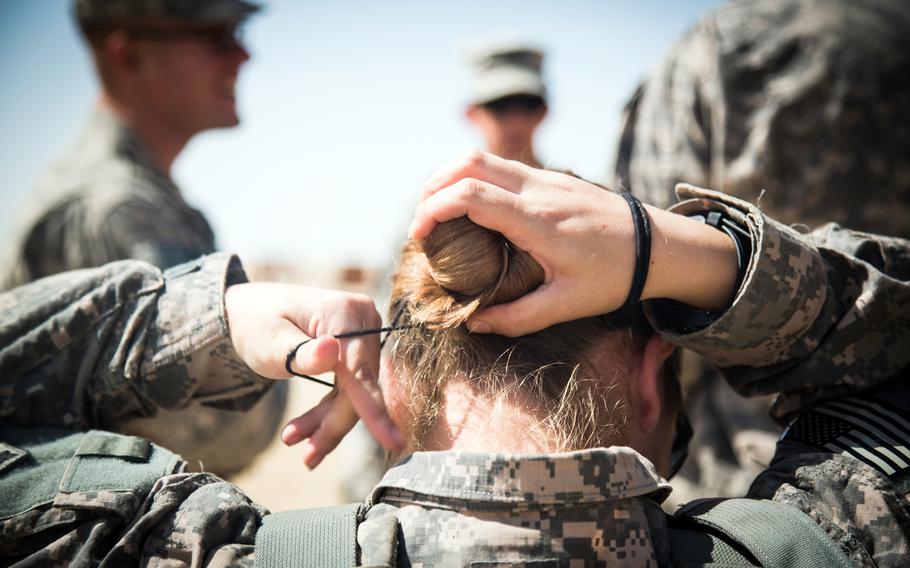 WASHINGTON — Female soldiers will be permitted by late February to wear several additional hairstyles in uniform under a new Army policy that is part of an effort to improve racial and gender equality throughout the service.

Senior leaders approved new policies last month that allow women to shave their heads or wear ponytails and hairstyle combinations such as braided twists and locs at the same time in uniform, according to service documents released Tuesday. The new grooming standards will take effect Feb. 25 alongside an updated version of AR-670-1, the Army’s all-encompassing regulation governing appearance and how to wear uniforms, which was also announced Tuesday.

Sgt. Maj. of the Army Michael Grinston, the service’s most senior enlisted soldier, told reporters Tuesday that the changes were driven by feedback from soldiers. He said many women detailed the struggles that they faced with grooming standards, especially former policies that mandated women with long hair wear it in buns.

“This is about listening to our soldiers, taking what they are saying and determining how can we incorporate that into the Army,” Grinston said. “They spoke out, we listened, and I think we went through a really good process. I’m really excited about the changes we’re making.”

A uniform policy board of mostly female soldiers met in December and gave recommendations about changes they believed would benefit soldiers, said Army Sgt. Maj. Brian Sanders. The board did not meet in time to roll the new policies into the new AR 670-1, but Sanders said they would be included in that regulation next time it is updated.

The changes include authorizing women to wear long ponytails during physical training, field training and combat operations. The policy allows women to wear the long ponytail out during fitness training, but female soldiers must tuck it into their Army Combat Uniform top when they are wearing a helmet.

Women for years had struggled to keep their helmets in the correct place while wearing a bun, Grinston said. The long ponytail option should allow them to properly wear headgear while shooting, he said.

“We had to listen to our soldiers who said, ‘Hey, I'm having an issue, and I could be a better soldier if you just let the hair down when I'm wearing my helmet,” he said. “It allows [them] to be better soldiers and engage a target, and those are the things you just have to be constantly aware of, and we have to be open-minded about it.”

The regulation changes also allow women to wear short ponytails in all uniforms if they are “unable to form a bun due to the length and/or texture of [their] hair.” Those ponytails must not be wider than their heads, must not extend below the bottom of their uniform collars and cannot interfere with headgear.

Sanders said that regulation was geared largely toward women who had to go to great lengths to place their hair in a bun. A medical expert advising the panel concluded the change would help prevent alopecia and other forms of hair loss common in military women who force their hair into buns, Sanders said.

The panel also approved women to wear “multiple hairstyles at once as long as it is neat in appearance and does not impact the wear of headgear and equipment.” The change was aimed primarily at Black women, said Sanders, and allows female soldiers to mix styles such as twists, braids, locs and cornrows.

Female soldiers will also now be allowed to wear their hair shorter than one-quarter inch, a policy that brings the service in line with regulations at places such as Ranger School, where women attendees must shave their heads like men.

Some of the new polices extend beyond hair. The new regulations allow female soldiers to wear lipstick and nail polish as long as the colors are not considered extreme, such as purple, blue, black or very bright shades. It also permits women to wear earrings in the Army Combat Uniform for the first time in Army history, Sanders said.

Women have long been authorized to wear earrings in their dress and service uniforms. They will now be allowed to wear gold, silver, or diamond stud earrings when wearing combat uniforms in a garrison setting. Earrings remain restricted from field training, combat or other tactical settings, Sanders said.

Not all the changes were geared exclusively toward women. The new policy allows men to wear clear nail polish in uniform. That measure is meant for soldiers who work with harsh chemicals regularly and want to “protect their nails,” Sanders said.

The changes to AR 670-1, the first update to the regulation since 2017, primarily include previously announced policy adjustments driven largely by the implementation of the service’s new World War II-inspired Army Green Service Uniform, Sanders said.

Grinston said the Army had not yet scheduled another uniform policy board, but he and other top leaders were open to hear soldier’s suggestions.

Sanders said a future board could take up the topic of male soldiers wearing beards in uniform, but nothing official has been discussed. Some soldiers have been granted policy exceptions allowing them to wear beards for religious or medical reasons.

“It’s a topic that all of us are very aware of,” Sanders said. “I think it’s safe to say that this is definitely one of the topics that is going to be considered during our next review panel. It’s a topic that needs to be discussed.”