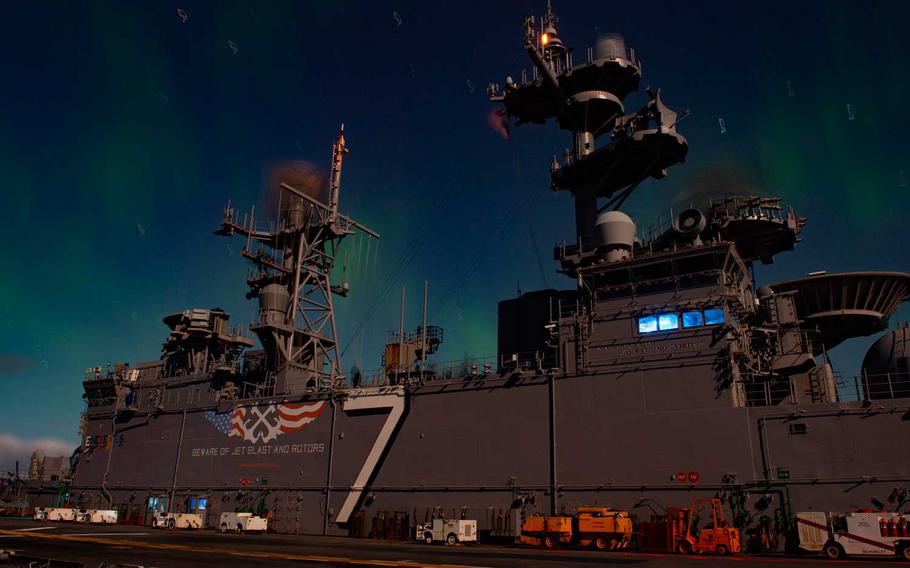 The Wasp-class amphibious assault ship USS Iwo Jima (LHD 7) passes under the Northern Lights while participating in exercise Trident Juncture 2018. On Tuesday, Jan. 5, 2021, The U.S. Navy released its strategy on how the service plans to become more active in the Arctic as the region opens up to more economic and military competition from Russia and China. (Kevin Leitner/U.S. Navy)

WASHINGTON — The U.S. Navy released its strategy Tuesday on how the service plans to become more active in the Arctic as the region opens up to more economic and military competition from Russia and China.

“In the face of increasing aggressive activity in the high north from both Russia, which is an Arctic nation, and China, which claims to be a near Arctic nation, we in the United States must maintain a favorable balance of power in this region for ourselves and for our allies,” Navy Secretary Kenneth Braithwaite told reporters ahead of the document’s release.

With more navigable waters due to melting sea ice, the Navy’s strategy refers to the region as a “Blue Arctic.” Russia and China, both nations mentioned in the 2018 National Defense Strategy as “great-power” competitors with the United States, have increased their military and economic presence in the Arctic in recent years due to the opening of arctic waters, the Navy said.

“Without sustained American naval presence and partnerships in the Arctic region, peace and prosperity will be increasingly challenged by Russia and China, whose interests and values differ dramatically from ours,” according to the 25-page document.

The United States is an Arctic nation and for decades has maintained a presence there, including submarines and the U.S. Coast Guard’s icebreakers. The Navy’s recently reestablished 2nd Fleet and 6th Fleet also operate and participate in exercises with other Arctic countries in the region, according to the document, which was referred to by officials as a “blueprint.”

The strategy was signed by Braithwaite, Adm. Michael Gilday, the chief of naval operations, and Gen. David Berger, the commandant of the Marine Corps, and it lays out the economic and military necessity of a greater Navy presence in the Arctic in the next two decades.

About 90% of trade travels across the oceans and that is expected to double iwithin 15 years, according to the Navy document. The Arctic has the potential to “connect nearly 75% of the world’s population” as ice melts and trade routes open up shorter routes to and from Asia, Europe and North America.

The area also has an “estimated 30% of the world’s undiscovered national gas reserves, 13% of global conventional oil reserves, and [$1 trillion] in rare earth minerals,” the document states.

Russia has been reopening old military bases and moving forces there and it operates a large icebreaker fleet. China is increasing its shipbuilding and port infrastructure in the region. The document also states the U.S. Navy expects to see more Chinese naval deployments in the Arctic, both on the surface and underwater.

In his previous position as U.S. ambassador to Norway, Braithwaite said he saw the increased presence of the Chinese at a northern Arctic port due to more open trade routes.

“So that presence is formidable. And the U.S. Navy…although we've operated up there, we have not had the kind of presence that the current situation requires,” he said.

The Navy document also states the United States has a limited window of opportunity to reassert itself in the region through increased presence and partnerships.

“Left uncontested, incremental gains from increased aggression and malign activities could result in a fait accompli, with long-term strategic benefits for our competitors,” the document states.

In the next 20 years, the Navy will increase participation in exercises, port calls, and training of its personnel, according to the document.

Braithwaite also said the Navy is looking at sharing infrastructure at bases that are already located in the region by other services or countries instead of reopening and rebuilding bases.

Sen. Dan Sullivan, R-Alaska, an advocate for increased military presence in the Arctic, praised the strategy in a statement Tuesday, saying the country needs to better protect its sovereignty and homeland in the north.

“Although I believe the department’s new blueprint lacks some of the urgency needed to drive the development of critical capabilities that are required to effectively compete with our rivals in the Arctic, it rightfully acknowledges the need to evolve our forces to more adeptly project and sustain naval power throughout the high latitudes,” he said.