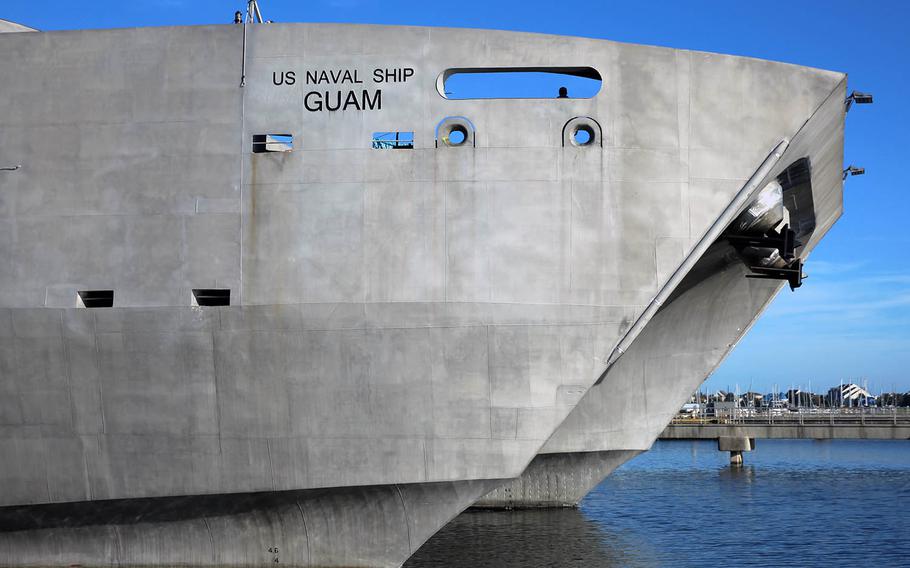 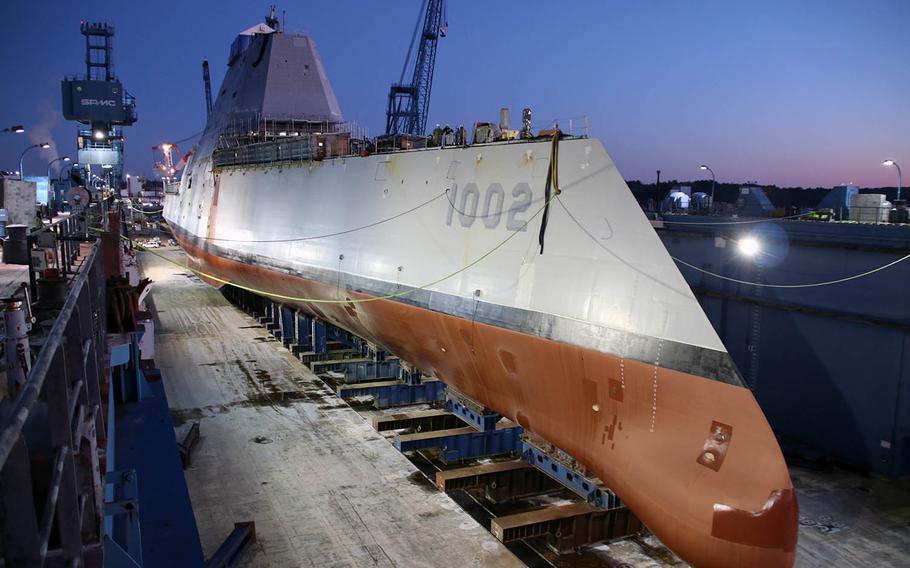 Scheduled for christening Saturday, April 27, 2019, the USS Lyndon B. Johnson was built at Bath Iron Works, Maine, as shown here on Dec. 9, 2018. (Courtesy of General Dynamics)

The Navy will christen two of its newest ships, the third and final Zumwalt-class guided-missile destroyer USS Lyndon B. Johnson and the high-speed transport vessel USNS Guam on Saturday.

Lynda Johnson Robb and Luci Johnson as ship sponsors will break a bottle of wine across the bow of the ship that bears their father’s name, Lyndon B. Johnson, 36th president of the United States. The christening takes place at 10 a.m. in Bath, Maine, where the vessel was built at the General Dynamics Bath Iron Works.

Half a world away, at 10 a.m. in Okinawa, Japan, Bruni Bradley, a 25-year Navy veteran and wife of U.S. ambassador to South Korea Harry B. Harris Jr., will christen the USNS Guam. The Guam is a former fast ferry that belonged to the now defunct Hawaii Superferry corporation.

The Navy obtained the vessel and its sister ship, the Alakai, renamed the USNS Puerto Rico, from the Department of Transportation in 2012, according to Pacific Business News.

Austal USA, the Mobile, Ala.-based arm of the Australian shipbuilding firm, built the ship now known as the Guam. The 373-foot-long ship is fast, flexible and maneuverable, making it the ideal vessel for transporting troops and equipment rapidly, according to a statement from the Navy.

By contrast, the 610-foot-long Lyndon B. Johnson has a stealth design, meaning it’s engineered to reduce its radar signature, and is capable of sailing at 30 knots, according to the Navy. It has a wave-piercing tumblehome hull and a state-of-the-art electric propulsion system.

The Navy originally planned to put 32 Zumwalt-class destroyers to sea, a number trimmed to three as the price of each ship, an estimated $8 billion, grew after 2005, according to the Project on Government Oversight, a nonpartisan, independent watchdog group based in Washington, D.C.

The Zumwalt-class ships carry the Advanced Gun System, which fires precision-guided, 155-mm projectiles. The cost of those projectiles last year reached nearly $1 million each — almost as much as one of each ship’s Tomahawk missiles, according to a POGO report in January.

The Navy left the system on the Zumwalt-class destroyers in inactive status until a cheaper projectile could be developed.

However, the ship is capable of anti-air warfare, anti-submarine warfare, surface warfare, land attack and strike warfare missions. It joins the two other ships of its class — USS Zumwalt and USS Michael Monsoor — already in the fleet.

The Lyndon B. Johnson is the first ship to bear the name of the late president, who held office from 1963-69. Before his presidency, Johnson was a Navy Reserves officer and served on active duty in the Pacific theater during World War II.

“The future USS Lyndon B. Johnson will serve for decades as a reminder of President Johnson’s service to our nation and support of a strong Navy and Marine Corps team,” said Secretary of the Navy Richard V. Spencer, in the statement.

The USNS Guam is the fourth ship to be named after the U.S. territory in the Pacific Ocean. The first Guam was a patrol gunboat in 1941 that was later renamed Wake then captured by Japan that same year. Then came the Alaska-class large cruiser that served from 1944-1947 and the Iwo Jima-class amphibious assault ship that served from 1965-1998.