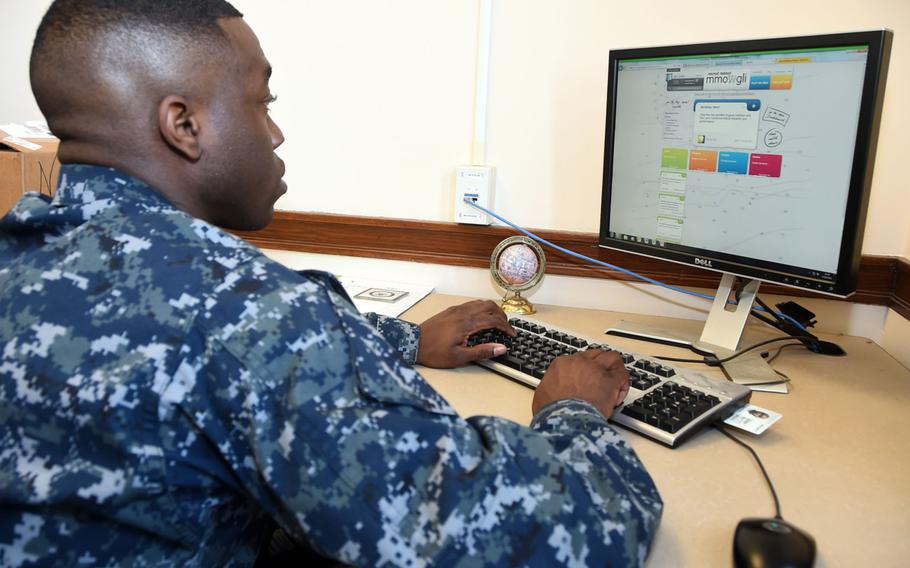 A sailor provides feedback to evaluate training practices at Training Support Center Great Lakes, Ill., in 2016. The Navy eliminated most of its unpopular online training programs on March 27, 2017, in favor of face-to-face training with unit leaders. (Scott A. Thornbloom/U.S. Navy photo)

The Navy has deep-sixed most of its annual online General Military Training in response to sailors’ pleas.

Sailors will no longer be required to complete several hours of annual online courses, other than the Cyber Awareness Challenge, Vice Adm. Robert Burke, chief of naval personnel, announced Monday in a message to the fleet.

“Bottom line we heard you, we fixed it,” Burke said in the message.

Local commands will conduct face-to-face training in small units on topics such as suicide awareness, sexual-assault prevention and equal-opportunity regulations, according to the new guidance.

“It puts training back in the hands of sailors, eliminates passive, impersonal, and ineffective approaches to training, and enables a powerful and personal focus on integrity, accountability, and character through an interactive learning dialogue,” Burke said.

Topics like records management and operation security can be conducted at all-hands calls and divisional training times until leaders are satisfied that sailors understand the objectives, the statement said.

Online courses will still be available to serve as a guide for commands looking to create their own training programs. However leaders will not be required to re-create the online training material, the statement said.

“There is no doubt this approach will yield an even greater competitive edge for the Navy … now let us get after it,” Burke said.

Petty Officer 3rd Class Tiffani Baker, a quartermaster aboard the USS Benfold, welcomed the elimination of online training, saying that completing the training aboard ships is challenging because of lack of computer access or spotty internet.

“I found training online frustrating as the website was always down or slow,” she said. “We only have some many computers on the ship. I would have to go to the USO, [Fleet Recreation Center] or the library.”

Petty Officer 3rd Class Trevor Reese, a fire controlman aboard the Benfold, also welcomed the change but said assembling many sailors in one place for face-to-face training could be a challenge.

“If training is being held and they gather everyone together, but a third of the command is [temporary additional duty] or at school or something, they would have to coordinate to make sure that everyone has the proper training,” he said.