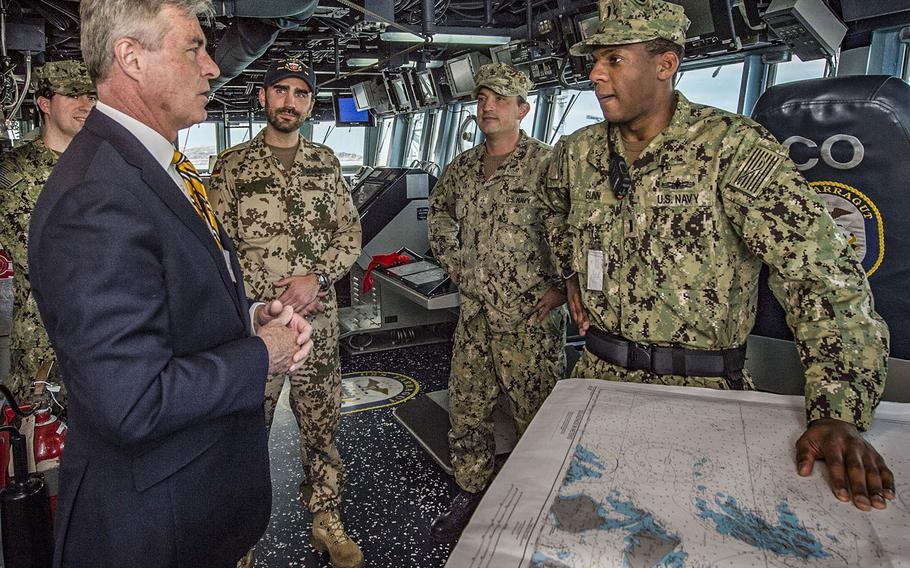 In a May 9, 2018 photo, U.S. Ambassador to Norway Kenneth J. Braithwaite speaks with sailors in the pilothouse of the guided-missile destroyer USS Farragut during a tour of the ship at Bodo, Norway. (Cameron M. Stoner/U.S. Navy)

WASHINGTON — The Navy is in “troubled waters” following years of leadership failures that led to scandals, ship collisions, and the health crisis aboard the USS Theodore Roosevelt, the nominee for the Navy’s top civilian job told senators Thursday.

Kenneth Braithwaite, the U.S. ambassador to Norway, listed some of the recent failings in his opening statement to members of the Senate Armed Services Committee that he believes have caused a breakdown in trust in Navy leadership. His list included the Fat Leonard scandal, the 2017 collisions of the USS Fitzgerald and USS John S. McCain, as well as “judicial missteps” and the coronavirus outbreak on the Roosevelt.

He said his number one priority, if confirmed as the 77th Navy secretary, would be to “restore the appropriate culture” in the service. Culture is what gives an organization a sense of belonging and good order and discipline, he said.

“[Navy] culture exists. I won’t say it’s broken. I think it’s been tarnished,” Braithwaite said. “I think the events over the last several years have helped see that occur.”

Braithwaite is a 1984 graduate of the U.S. Naval Academy and served in the Navy and then Navy Reserve for 27 years. President Donald Trump nominated him March 2 to be the next Navy secretary.

The Navy’s recent secretaries have been embroiled in controversies in the last several months.

Richard Spencer, the last Navy secretary, was fired Nov. 24 by Defense Secretary Mark Esper for his handling of the personnel decision for Navy SEAL Chief Petty Officer Edward Gallagher, who had been accused of committing war crimes. Gallagher was acquitted of murder in 2019 but found guilty of posing in a photo with the dead body of an Islamic State fighter. Spencer had gone around Esper to propose a different strategy to the White House on handling Gallagher and the Navy’s review determining whether Gallagher would be able to retire with his SEAL trident pin.

Former acting Navy Secretary Thomas Modly resigned April 7 after disparaging comments made to the Roosevelt’s crew about the aircraft carrier’s former commander, Capt. Brett Crozier, were leaked online. The ship was in port in Guam due to a coronavirus outbreak that has since infected more than 1,000 sailors.

The Navy is investigating the coronavirus outbreak aboard the ship and the Navy’s response to help. The investigation was recently expanded by acting Navy Secretary James McPherson because of what he said are “unanswered questions.”

Braithwaite on Thursday was supportive of the additional time being taken to investigate the matter.

“I believe that whenever you’re confronted with a challenge like this, it’s best to pause, consider all the facts, and then make the right decision,” he said.

Referring to the actions and failings of his predecessors in handling personnel cases such as Gallagher and Crozier, Sen. Tim Kaine, D-Va., asked Braithwaite what he felt were his responsibilities in individual personnel decisions as the Navy secretary.

“Good order and discipline starts with the chain of command … I believe that our commanders … are vested with the responsibility to be accountable, as well as to lead those who serve under their leadership. And I believe they should be empowered to do such,” Braithwaite said.

As part of the chain of command, he did not see himself intervening in individual personnel decisions, saying he wants that left up to the uniform leaders.