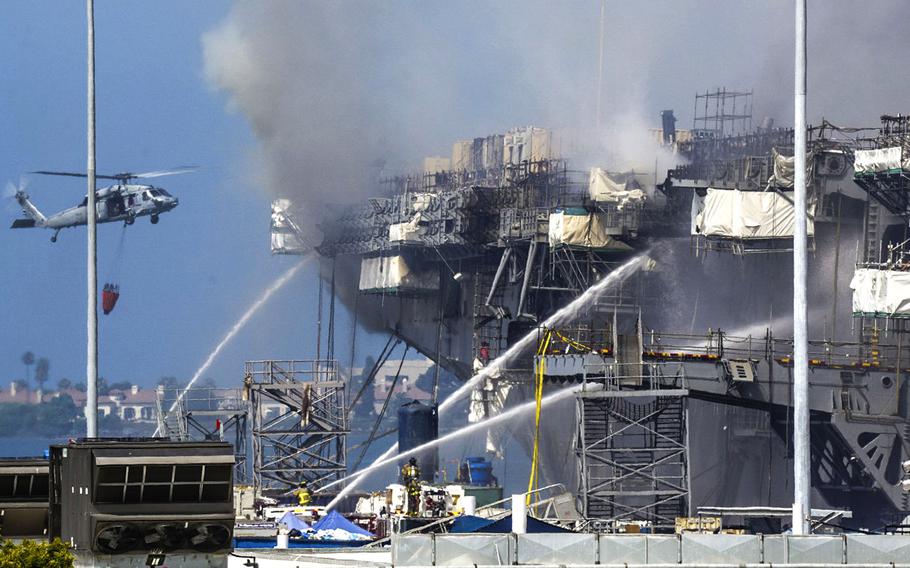 Firefighters battle the blaze aboard USS Bonhomme Richard at San Diego Naval Base on July 13, 2020. (The San Diego Union-Tribune)

WASHINGTON — The USS Bonhomme Richard will not return to sea after the Navy determined that the damage it sustained from a fire in July was too extensive and restoration deemed too expensive, the service announced Monday.

“We did not come to this decision lightly,” Navy Secretary Kenneth Braithwaite said in a prepared statement. “Following an extensive material assessment in which various courses of action were considered and evaluated, we came to the conclusion that it is not fiscally responsible to restore her.”

The 22-year-old Bonhomme Richard, a Wasp-class amphibious assault ship, was undergoing maintenance at Naval Base San Diego when the fire started July 12. The fire burned through 11 of its 14 decks, destroying the ship’s forward mast, and damaging its superstructure before it was extinguished July 16. About 40 sailors and 23 civilians were treated for minor injuries, such as heat exhaustion and smoke inhalation.

How the fire started is still unknown, however Navy officials at the time believed it began in the cargo hold where supplies for the maintenance work being conducted on the ship were stored at the time.

“This fire probably couldn’t have been in a worse point on the ship in terms of its source that allowed it to spread up elevator shafts as an example, up exhaust stacks as an example, to take that fire up into the superstructure and then forward,” Adm. Mike Gilday, the chief of naval operations, said about the fire a day after it was put out.

In an email to senior naval leaders soon after Gilday’s visit to the ship, he wrote that sections of the flight deck were warped and bulging and firefighters told him that they had faced 1,200-degree heat, zero visibility and multiple explosions on the ship. Wind from the bay and the explosions allowed the fire to spread and become more intense, he said.

Gilday praised the work of sailors in his letter, some of whom went aboard the ship eight times to fight the fire.

“They had experienced the intense, inferno-like heat, the dark smoke that obscured view of teammates by their side, and the explosions — the latter had to be like a mine field … unknown when and where, and how severe, those blasts might be. Some had been knocked down by these blasts — some, more than once — but they got up, refocused and reattacked.” All investigations into the fire are still ongoing, according to the Navy’s statement Monday.

The Navy’s assessment of the damage concluded it would cost more than $3 billion to restore the ship and five to seven years for construction to be completed. The service also considered rebuilding the ship for other purposes but again determined the $1 billion cost, which could build a new hospital ship or command and control ship, was too much.

“Although it saddens me that it is not cost effective to bring her back, I know this ship’s legacy will continue to live on through the brave men and women who fought so hard to save her, as well as the sailors and Marines who served aboard her during her 22-year history,” Braithwaite said.

When the ship will be dismantled has not been decided, according to the Navy. However before that, the service plans to remove systems and components from the Bonhomme Richard to be used by other ships.

The cost of decommissioning the ship will be about $30 million and will take up to a year, according to Rear Adm. Eric Ver Hage in a report by The San Diego Union-Tribune. Ver Hage is the commander of Navy Regional Maintenance Center.