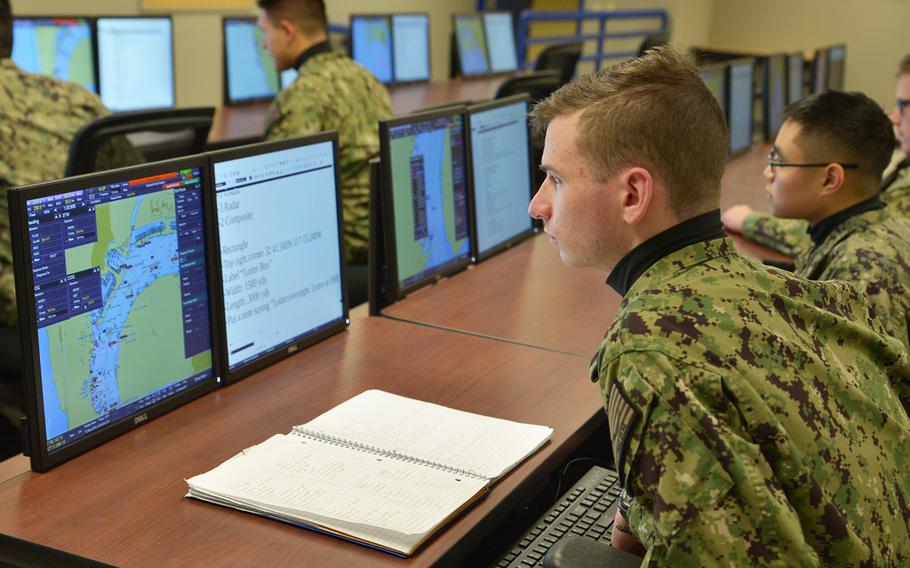 The simulators are part of the Navy’s push to modernize training in the classroom under their Ready Relevant Learning initiative, which is the “right training at the right time in the right way,” said Capt. Dave Stoner, the commander of the Center for Surface Combat Systems Unit at Naval Station Great Lakes in Illinois.

The Navy’s initial training school, or “A” school, for sailors who are operations specialists is the first of the schools to have its curriculum modernized with the inclusion of more time with simulators. Operations specialists have duties that involve navigation, lookout and shipboard warfare. The Navy is working towards similar modernizing of the initial curriculums of other Navy jobs, Stoner said.

Some students at the “A” school said they related more to the simulator training for learning the skills required for their jobs.

The experience is “more hands on instead of reading out of a book,” Seaman Apprentice Raychelle Hart, an operations specialist, said about using the simulators.

Two labs with simulated scenarios at the school focus on watch duties and navigation. Students can don headgear and sit at computer screen panels similar to what they would experience with the job on a ship. The Voyage Management System lab for ship navigation cost $100,000 and the Ship Self-Defense System lab for training on defending a ship from threats cost $750,000, according to Cmdr. James Stockman, a spokesman with Naval Education and Training Command.

Training for sailors has been scrutinized in the past few years after the USS John S. McCain and USS Fitzgerald were involved in separate deadly collisions in the Pacific in 2017. After the incidents, the Navy found problems service-wide with not having enough sailors and cutting corners on training in order for them to keep up with their work.

Students are shown a video about the USS McCain and USS Fitzgerald collisions at the beginning of their training to emphasize that “lives are at risk,” said Dean McCarty, director for training at the Center for Surface Combat Systems. “So that provides them that motivation and that hook that they need to pay attention in class and participate.”

One simulator that students train on, called “Rules of the Road,” focuses on spotting objects they could encounter at sea while standing on the side of their ship on watch duty, such as trawlers or tug boats. They don headsets like they would on the ship to hear the scenario shown on a large screen in the classroom and they are given multiple choice questions to answer and report back what they see to the combat information center on the ship. The scenarios in the program are what sailors will face every day, Stoner said.

The Voyage Management System lab trains students on the same computer software they would use on a ship to safely navigate the vessel. Students take an 80-hour course and leave certified on the system, unlike before when they were only introduced to the system for about 5 hours with little hands-on experience, McCarty said.

The school can go to the simulator contractor to get additional scenarios built, McCarty said, and they are working on the ability in the future to have more control in building scenarios themselves in the classroom.

Seaman Joshua Orozco found the simulators provided them examples of the real-world situations that they will encounter at sea.

“There’s only so much that a book and a picture can convey. Moving graphics and 3-D images of scenarios that we might run into is a lot more helpful,” he said.

In the future, the Navy plans to incorporate virtual-reality googles for students to wear to make the learning experience more immersive. Students are given the opportunity to go through the scenarios repeatedly, even outside of normal class hours, to hone the skills that they are incorporating into muscle memory, McCarty said.

Prior to the update to the operation specialist curriculum, instructors had been removed from the front of classrooms and students were learning skills through a knowledge-based approach with computer-based training and they were just clinking through the lessons, he said.

The pivot towards a performance-based system brought back the instructors and increased the amount of time that students are working on tasks in the classes from 30% to 70%, McCarty said.

Stoner said it’s too early to tell whether sailors are retaining the information better than before due to the simulator training. According to McCarty, the pool of graduates from the new curriculum is too small and new to the fleet for them to receive enough feedback yet from commands. Only 150 have gone through the curriculum since it launched as a pilot program in May, with the first official course having started in September.

So far, McCarty said they have found there are less students who have to come in for additional mandatory study on the curriculum and there are more students passing the course.