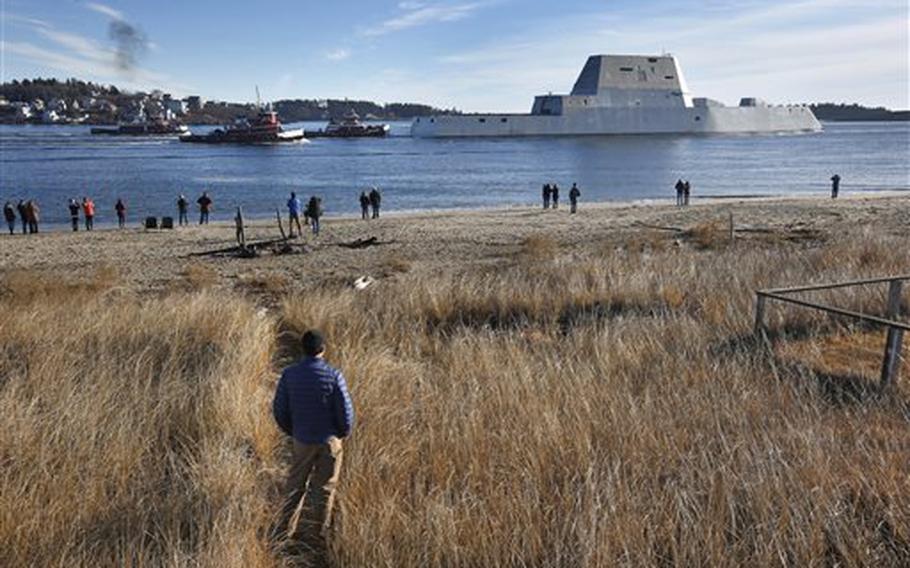 The first Zumwalt-class destroyer, the USS Zumwalt, the largest ever built for the U.S. Navy, leaves the Kennebec River, Monday, Dec. 7, 2015, in Phippsburg, Maine. The ship is headed out to sea for the first time to undergo sea trials. (Robert F. Bukaty/AP)

WASHINGTON — The Navy's new stealth destroyer began a week of sea trials Monday to try and prove that after years of setbacks, the next-generation warship was worth the wait.

The USS Zumwalt (DDG-1000) is the first in a class of futuristic destroyers that will have an angular but low external profile to maximize stealth on the outside, and next-generation power systems to enable the ship to run energy-demanding future weapons and sensor systems on the inside.

The ship sailed Monday from its port in Bath, Maine for a weeklong test of its onboard systems, according to the Navy.

"Over the next several days, the Navy will demonstrate many of the ship's key systems and technologies," said Capt. Thurraya Kent, a Navy spokeswoman. "The Navy and the shipbuilder are executing the test program of this first of class ship with extreme rigor and this initial at-sea period will allow for earlier issue identification and risk mitigation."

The Zumwalt was designed to replace the Navy's current fleet of Arleigh-Burke destroyers but cost overruns and program delays led the Navy to cap the ship's production to three. The procurement costs of the three Zumwalt ships is estimated to top $12.3 billion, about 37 percent more than their initial $8.9 billion program estimate. The program as a whole, including research and development costs, is estimated to reach $22 billion.

Critics have questioned whether the ship is the right fit for future warfare, and it's escalating price tag hasn't helped, said Peter Singer, a senior fellow at the New America Foundation and co-author of "Ghost Fleet: A Novel of the Next World War."

"No ship is more interesting in the way that it links the past with the questions that surround the future of naval war,” he said. “It is both a throwback and a breakthrough. It is the size of a World War I battleship, originally designed for gunfire shore bombardment, a role many are not sure we even need anymore, but utterly revolutionary in other ways.”

Singer said the Zumwalt's focus won't be fighting the Islamic State group, but deterring China in the Pacific Ocean.

"Given the re-entry of the great power rivalry to 21st century politics, that is a good thing," he said.

While the ship has experienced setbacks, the Zumwalt offers technological improvements that will be required in the Navy's future fleet whether it is the future platform of choice, said naval expert Ron O'Rourke of the Congressional Research Service.

Unlike the current fleet of destroyers and cruisers, an integrated electric drive powers the Zumwalt's stealth and weapons systems such as lasers and an electromagnetic rail gun developed to compete with emerging Chinese and Russian technology, O'Rourke said.

"If you don't do that through integrated electric drives, you have to do that with other power structure - batteries and capacitors and such," said O'Rourke, who was speaking at a U.S. Navy Institute conference in Washington on future U.S. sea power challenges. "Right now we don't have ships on the books on the shipbuilding plan beyond the three Zumwalts that will do that.

So now the question becomes, Are you going to do that in some other way? We need to address that."