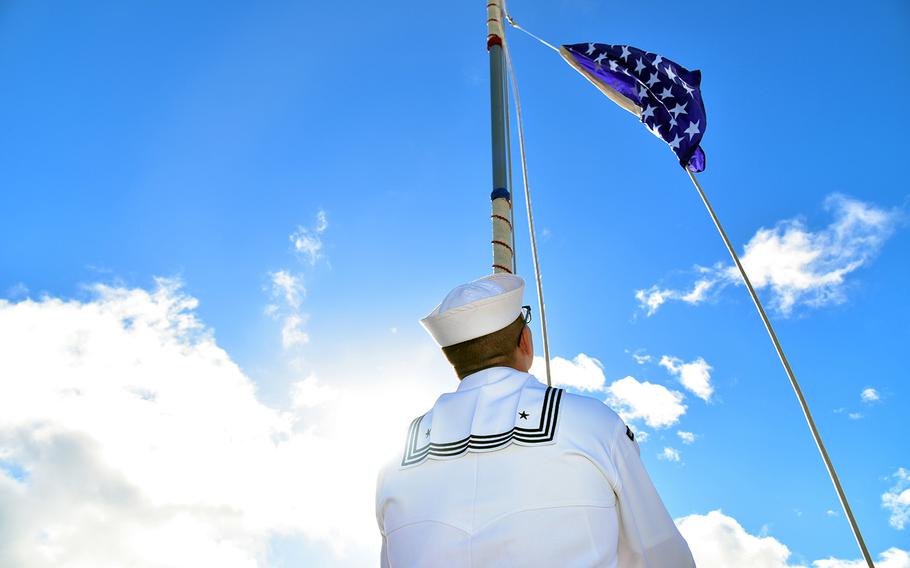 A sailor raises the Union Jack aboard the guided-missile destroyer USS Chung-Hoon during a ceremony at Joint Base Pearl Harbor-Hickam, Hawaii, June 4, 2019. (Kenneth Rodriguez Santiago/U.S. Navy)

FORT SHAFTER, Hawaii — The U.S. Navy officially switched to flying the Union Jack flag aboard its ships Tuesday, a move timed to coincide with the 77th anniversary of its role in the decisive Battle of Midway in World War II.

During a ceremony commemorating the battle aboard the guided-missile destroyer USS Chung-Hoon at Joint Base Pearl Harbor-Hickam, the 50-star Union Jack was hoisted for the first time since 2002, when it had been replaced by the First Navy Jack in response to the 9/11 attacks.

Adm. John Richardson, chief of naval operations, announced in February that the Navy would be returning to its long tradition of flying the Union Jack, a version of which was first flown in 1777.

Capt. Joseph Naman, chief of staff for Naval Surface Group Middle Pacific, told the ship’s crew, “Your role in the United States Navy is vital. The job you are doing right now will contribute to the overall success or failure in the challenges facing our generation. That’s the reminder of the Union Jack and the lesson that the Battle of Midway teaches us.”

The Battle of Midway was relatively short, lasting June 3-7, 1942, but the American fleet inflicted devastating damage and losses to the Imperial Japanese Navy.

The Japanese had planned to seize Midway Atoll, which is roughly 1,500 miles northwest of Hawaii. The American fleet, however, caught the Japanese armada by surprise and it lost almost 300 planes, a cruiser and four aircraft carriers, which had been among the six used in the attack on Pearl Harbor six months earlier. About 2,500 Japanese died.

The U.S. had far fewer losses, with 300 men dead and the carrier Yorktown and a destroyer sunk.

“With the decisive victory at Midway the United States would begin the long struggle to roll back a proud and determined foe,” Naman said in a Navy statement. “It would be the unconquerable spirit of this great nation and the United States Navy that would turn the tables on the Axis powers.”

The Navy had switched over to flying the First Navy Jack in 2002 in a symbolic response to the attacks on the World Trade Center and Pentagon on Sept. 11, 2001, the statement said. The flag is adorned with a rattlesnake and the words, “Don’t Tread on Me.”

That flag also has a long history in the service, but by custom it had been reserved for the commissioned ship having the longest total period in active status, according to the Navy.

In a statement in February announcing the change, Richardson said, “Make no mistake: we have entered a new era of competition. We must recommit to the core attributes that made us successful at Midway: integrity, accountability, initiative, and toughness. For more than two hundred and forty years, the Union Jack, flying proudly from jackstaffs aboard U.S. Navy warships, has symbolized these strengths.”

As of Tuesday, the only Navy warship authorized to fly the “rattlesnake” jack is the USS Blue Ridge, an amphibious command ship commissioned in 1970, the Navy said.

Homeported at Yokosuka Naval Base, Japan, the Blue Ridge is the 7th Fleet command ship.