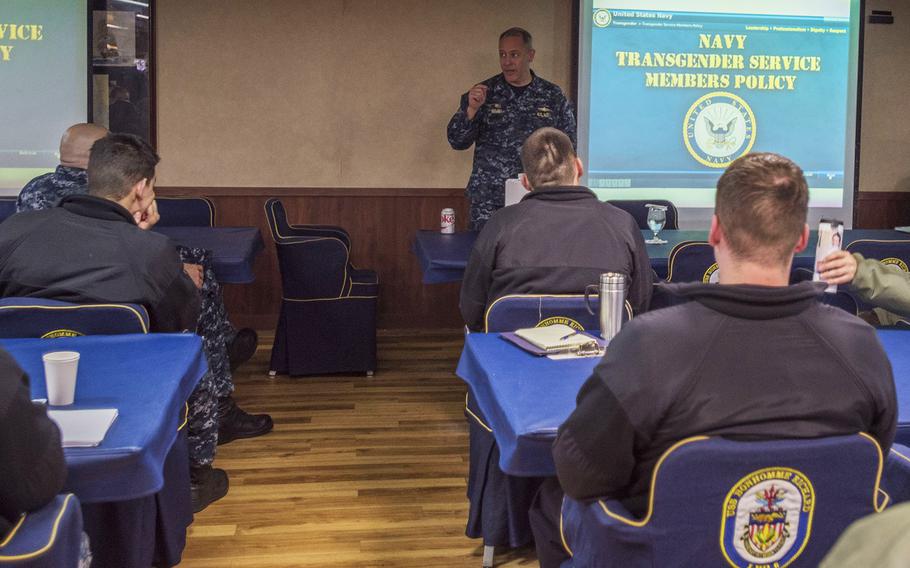 WASHINGTON — A transgender Navy officer is now permitted to serve openly as her preferred gender, the first such waiver since April 2019 when a Pentagon policy began to restrict transgender individuals in the military.

The acting Navy Secretary James McPherson approved the waiver to the transgender policy in this individual case, Lt. Brittany Stephens, a Navy spokeswoman, said in a statement.

The Pentagon’s policy does not allow the vast majority of men and women who have been diagnosed with gender dysphoria to enlist in the military or continue to serve as the person’s preferred gender without a waiver. Gender dysphoria is the medical condition associated with individuals who do not identify with their birth sex.

The Defense Department has stated it based the policy change on data gathered during a 2017 study of transgender troops that showed their service brought “substantial risks” to the military, such as affecting readiness and burdening the military with additional costs. The department has declined to make any of that data public or describe it in detail.

It remains unclear precisely how many servicemembers on active duty identify as transgender. A 2016 Defense Department survey, which was anonymous, found about 9,000 servicemembers identified themselves as transgender men or women, said Tony Kurta, who was performing the duties of the deputy undersecretary of defense for personnel and readiness in April 2019 when the new Pentagon policy went into effect. Some 1,400 troops have been diagnosed with gender dysphoria since the 2016 policy was implemented, he said at that time.

In a joint statement Friday, GLBTQ Legal Advocates & Defenders and the National Center for Lesbian Rights, legal organizations for LGBTQ rights and advocacy, said they had filed a lawsuit in March on behalf of the Navy officer who received the waiver. The government was going to file a response to the lawsuit next week, according to the statement.

"While we are relieved that our client, a highly qualified Naval officer, will be able to continue her service, there are other equally qualified transgender service members who have sought waivers and are still in limbo, despite being perfectly fit to serve,” Jennifer Levi, the director of GLAD’s Transgender Rights Project, said in the prepared statement.

The Navy officer, who has served two extended tours of duty in nine years, is seeking emergency relief from the policy in order to continue serving, according to a news release about the lawsuit. She had come out after the April 2019 policy was put into effect and needed a waiver to continue serving.

“Being transgender has nothing to do with a person’s fitness to serve, and transgender individuals should be held to the same standards as other service members,” Minter said.

The waiver “is an important victory for this sailor,” Peter Perkowski, the legal and policy director for the Modern Military Association of America, a LGBTQ non-profit, said in a statement.

“Over the past year, we’ve continued to hear from qualified transgender patriots who want to serve their country but can’t because of the Trump-Pence transgender military ban,” Perkowski said. “As our nation faces unprecedented challenges, the last thing our military should be doing is rejecting qualified individuals who want to serve simply because of their gender identity.”

Modern Military Association of America represents six service members in a lawsuit challenging whether the ban is constitutional, according to the statement.