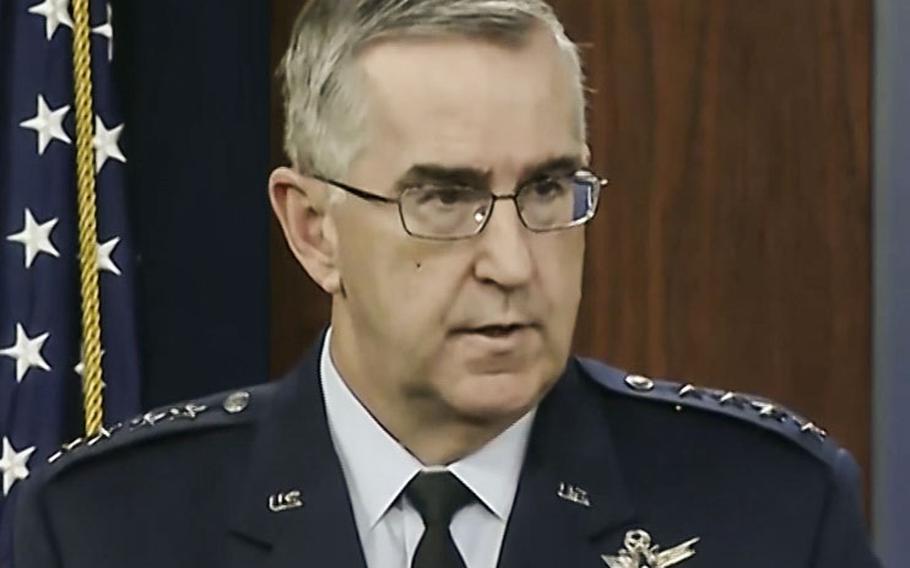 Gen. John Hyten, vice chairman of the Joint Chiefs of Staff, talks to reporters at the Pentagon on April 9, 2020. (From a DOD video)

WASHINGTON — The Navy should expect more ships to have outbreaks of the coronavirus after more than 400 sailors aboard the USS Theodore Roosevelt contracted the illness, Air Force Gen. John Hyten, the vice chairman of the Joint Chiefs of Staff, said Thursday.

Almost the entire 4,800-member crew of the aircraft carrier has been tested, with 3,170 sailors testing negative and 416 sailors testing positive, Hyten said. Of the sailors who have the virus, 187 sailors had symptoms and 229 were asymptomatic.

One sailor has also been hospitalized in Guam and is in the intensive care unit, Hyten said. About 2,700 members of the crew are now off the ship and spread out across the island.

Medical teams check on them twice a day and sailors also have a buddy system to check on one another, Hyten said. The hospitalized sailor was found unconscious in the morning by a friend.

During the news briefing, Hyten said the USS Nimitz aircraft carrier had “a very small number of breakouts” of the coronavirus among the crew, which was expected to deploy this month. The ship is now in port in Bremerton, Wash. However, the 3rd Fleet said in a statement: “There are no confirmed positive cases of [coronavirus] on board USS Nimitz at this time.”

One sailor showed symptoms of the virus and has been “placed into isolation off the ship out of an abundance of caution,” according to the 3rd Fleet. The sailor’s test came back “inconclusive.” Another sailor assigned to the ship tested positive in early March while on leave and the individual have not returned to the Nimitz.

The Navy now has to figure out how to plan their operations with the coronavirus in mind, Hyten said.

During a town hall meeting at the Pentagon afterward, Gen. Mark Milley, the chairman of the Joint Chiefs of Staff, dissuaded people from believing the U.S. military was not ready to fight during the pandemic.

“I don't want anyone out there in the world thinking the United States military readiness has been heavily degraded. It has not,” he said. “The Roosevelt — we think … if required in time of contingency planning, the TR would be ready. We could put that right back out to sea if needed.”