Navy Cross awarded to Marine for Helmand counterattack: 'We stand our ground' 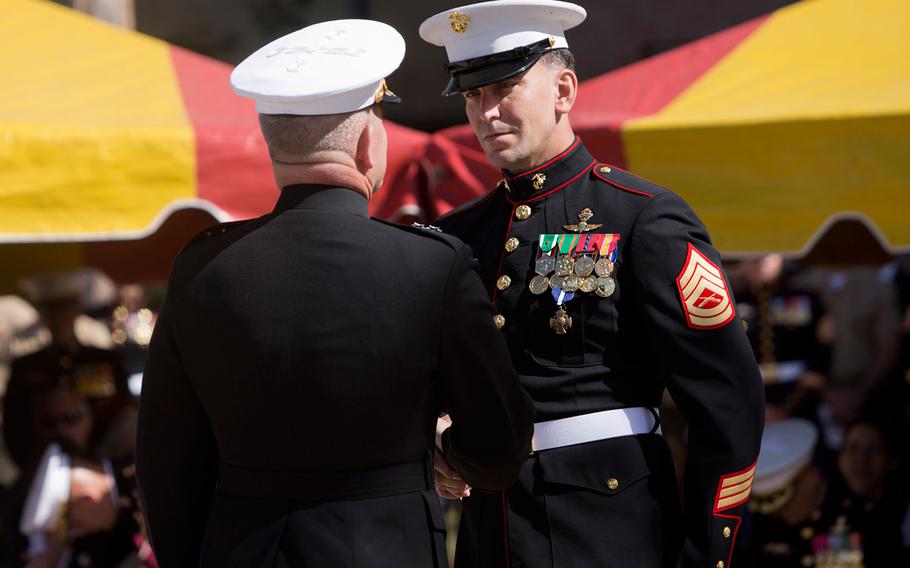 CAMP PENDLETON, Calif. — A small team of special operations Marines was on a rooftop in Helmand province, Afghanistan, in July 2012 when everything went wrong.

The opening shots of an enemy attack paralyzed the team leader from the chest down and severely injured another Marine. The team was suddenly surrounded by a force seven or eight times its size. The Marines were outmanned, outgunned, trapped on a rooftop and in desperate need of a medical evacuation helicopter.

It was the heaviest fire that Gunnery Sgt. Brian Jacklin has seen in 10 years of heavy combat experience. But he remained calm, organizing a counterattack and calling for a helicopter.

On Thursday, Jacklin was awarded the Navy Cross for his heroism during that battle, which retired Marine Capt. Derek Herrera said is the reason he is alive today.

Jacklin said that he was honored and overwhelmed by the medal, but that the Marines “really had no choice” but to fight back.

When a friend is injured, Jacklin said, Marines do everything they can to save his life.

“We don’t retreat. We stand our ground,” he said.

Once Jacklin had secured a helicopter for the injured Marines, he said the team had to breach a wall and run across a field under intense fire to reach the landing zone. He asked whether everyone was OK with the plan, and there wasn’t a second of hesitation, he said.

At the landing zone, the Marines used their bodies to shield their wounded teammates. Once the team was relieved by a SEAL team, Jacklin and David Harris voluntarily stayed behind to continue the fight.

Harris, Gunnery Sgt. William Simpson IV, Staff Sgt. Christopher Buckminster, Staff Sgt. Hafeez Bussein and Sgt. William Hall, all members of the same team, each received a Bronze Star with V on Thursday for their actions during the battle.

Maj. Gen. Joseph Osterman, commander of Marine Special Operations Command, said the team epitomizes what Marines are all about. “They do this for the Marines on their left and right flank,” he said, and they are “willing to sacrifice anything and everything” for those Marines.

Herrera, the team leader who was paralyzed by a bullet in the opening volley of the attack, said these Marines are his inspiration.

“Physically, I would not be here today” without their actions.

Herrera said Jacklin had been as effective in combat on hundreds of other occasions.

“It’s great to see him recognized, but he should have hundreds of Navy Crosses in my mind,” he said.