Navy calls for shipyard improvements in pursuit of 355-ship goal 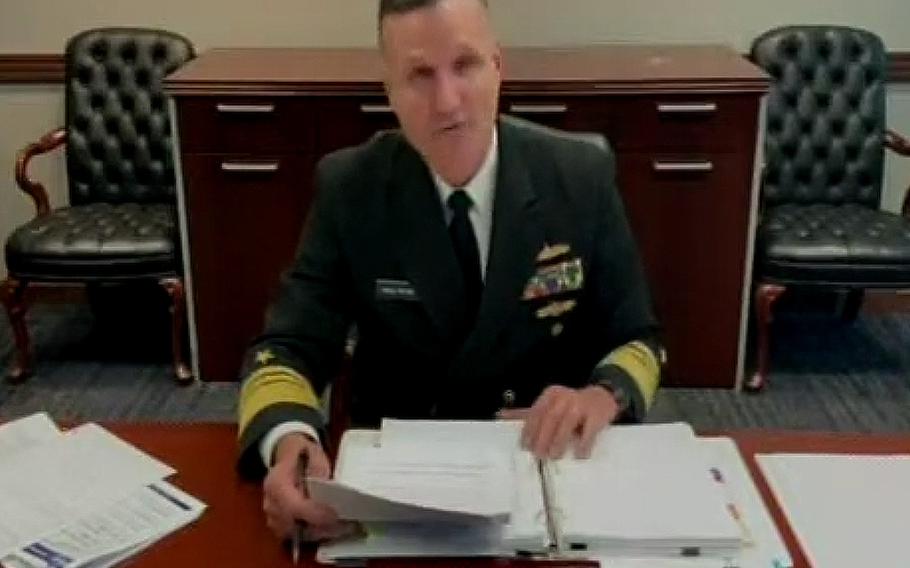 In a screen capture from a HASC video, Vice Adm. William Galinis testifies at a hearing on May 6, 2021. (HASV)

WASHINGTON — The United States must repair and modernize its four public shipyards and advance its shipbuilding and maintenance capabilities to maintain its strategic advantage against a growing Chinese navy, the vice admiral who oversees Navy shipyards told lawmakers Thursday.

“Our ability to deploy combat ready ships and submarines starts in our public and private sector shipyards and ship-repair facilities around the globe,” Vice Adm. William Galinis, who leads the Naval Sea Systems Command, told members of the House Armed Services Committee subpanel on readiness during a hearing on ship and submarine maintenance.

Since releasing its Shipyard Infrastructure Optimization Plan in 2018, the Navy has asked to repair and update the nation's four aging shipyards, which would assist in its pursuit of its congressionally mandated goal of a 355-ship fleet.

Originally built in the late 19th and early 20th centuries, “the Navy's public shipyards are not efficiently configured to maintain and modernize nuclear-powered aircraft carriers and submarines,” according to the command’s website.

The 355-ship goal was made law in the 2018 National Defense Authorization Act to help the Navy maintain its global presence, especially as China becomes increasingly aggressive at sea. For instance, since 2012, China has been claiming and militarizing small islands and reefs in the Western Pacific in attempts to further its South China Sea territorial claims, which are not recognized by international law.

Adm. Mike Gilday, the chief of naval operations, said last week that the Navy must maintain its presence overseas because the Chinese navy might be “beginning to treat Taiwan like Hainan island — as if it’s actually theirs.”

“At what point will they think that they are in a position for advantage to potentially move?” Gilday said. “We have to have forward forces forward in order to cause enough doubt in the minds of [Chinese] President Xi [Jinping] that today is not the day.”

A fleet of 355 ships would about match the current size of the Chinese navy, which the Pentagon estimates to be about 350 ships compared to the U.S. fleet of 296.

China has “long had much more shipbuilding capacity than we have,” Galinis said, which helped the nation surpass the U.S. as the largest navy in the world.

But that goal might not be attainable without increasing the U.S. shipbuilding and maintenance capacity — both in the public and private sectors, said Rep. John Garamendi, D-Calif.

“The Navy has operated at an untenable pace, sustaining the global presence it maintained 25 years ago with a much smaller fleet today. Rigorous and timely maintenance means we can have more ships at sea at any given time,” the congressman said. “As the administration contemplates a larger fleet of naval vessels, we must consider whether an already struggling shipyard enterprise has the capacity to sustain them.”

The testimony Thursday came a week after lawmakers in the House and Senate introduced the Supplying Help to Infrastructure in Ports, Yards, and America’s Repair Docks Act of 2021, or SHIPYARD Act, which would provide $21 billion in 20 years to support the Navy’s 2018 plan and another $4 billion to private shipyards that support the Navy’s fleet.

Updating the shipyards would benefit the construction of new ships and also help the Navy maintain its ships throughout their service lifetimes, Galinis said.

“Nearly 70% of our fleet at sea today will still be in service in 2030,” he said. “Our ability to effectively maintain these ships and submarines is critical to delivering on Navy our nation needs.”

Though the fate of the SHIPYARD Act remains undecided, Garamendi said Congress would write “certain timeframes in which we expect you to achieve goals” into the 2022 National Defense Authorization Act, which sets annual spending and policy priorities for the Pentagon. He also asked Galinis to provide five-year plans on the service’s needs to update the shipyards.