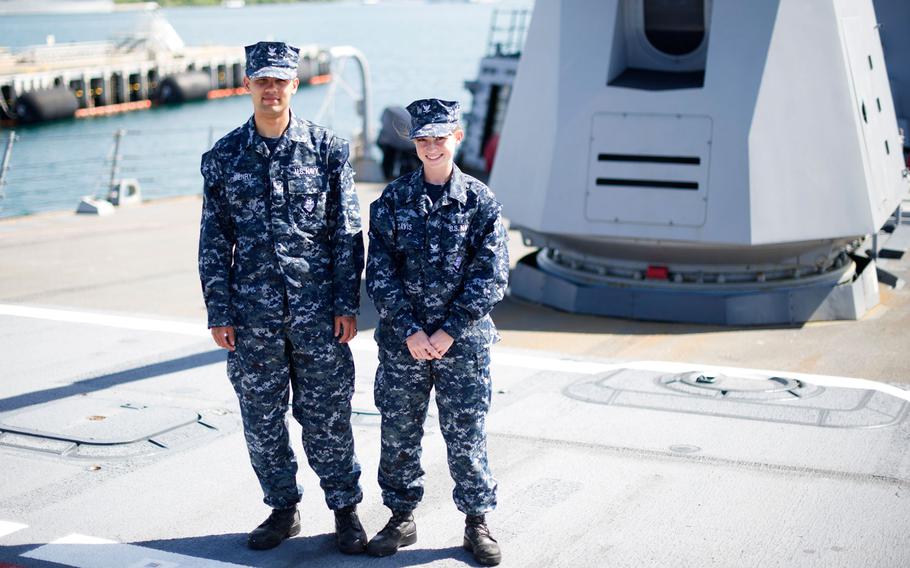 Sailors wear the Navy's Type I uniform aboard the guided-missile destroyer USS Chafee, June 11, 2014. The clothing has been widely panned by sailors as uncomfortable and heavy, and was found to be unsafe near fire. (David Kolmel/U.S. Navy Photo)

Sailors wear the Navy's Type I uniform aboard the guided-missile destroyer USS Chafee, June 11, 2014. The clothing has been widely panned by sailors as uncomfortable and heavy, and was found to be unsafe near fire. (David Kolmel/U.S. Navy Photo) The Navy announced this week that it will transition to the green Type III uniform as its primary shore working uniform. It replaces the blue camouflage Type I uniform that was unpopular with sailors. (Julia Casper/U.S. Navy)

The blue uniform, known as Type I, was phased in July 2010 as the Navy’s only authorized work uniform. But the clothing was widely panned by sailors as uncomfortable and heavy, and found to be unsafe near fire.

Complaints appear to have been a driving force behind the switch. Sailors around the world brought up the topic with top Navy officials, including the chief naval officer, Secretary of Navy Ray Mabus said in a statement.

“They want uniforms that are comfortable, lightweight, breathable ... and they want fewer of them,” he said. “We have heard the feedback and we are acting on it.”

This is the Navy’s first step in a process of consolidating the service’s uniform requirements. Type III uniforms will be issued to new recruits beginning Oct. 1, 2017, the Navy said. By Oct. 1, 2019, the Navy plans to eliminate the blue camo pattern from the seabag.

During that three-year period, sailors can wear either uniform when ashore or at port, the Navy said.

The Navy is continuing its wear test of an improved flame-resistant uniform for shipboard wear, the statement said.

There is now a preliminary design for a “more professional looking two-piece utility shipboard uniform that can be worn both at sea and operational support jobs ashore,” the Navy said. Wear tests for the two-piece prototype are slated for 2017.

Stars and Stripes reporter James Kimber contributed to this report.