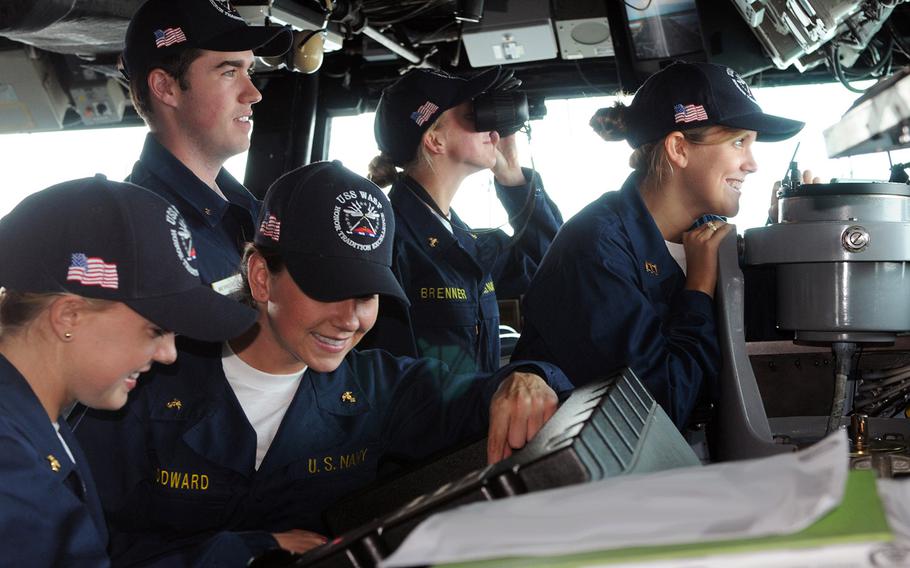 In a May, 2010 photo, visiting midshipmen interact with each other following watch station training on USS Wasp's navigation bridge. The U.S. Naval Academy and Navy ROTC send large groups of their students to the fleet each summer to gain practical knowledge of Navy life. (Edward Kobobel/U.S. Navy)

WASHINGTON — Midshipmen at the Naval Academy need to start receiving their coronavirus vaccines by the last week of March in order to participate in summer training with the fleet, the school’s superintendent said Tuesday.

The summer training “is such an important aspect to the development of a midshipmen,” Vice Adm. Sean Buck said during a hearing of the House Appropriations Committee’s subpanel on defense.

The military academies are following the Defense Department vaccination plan, which prioritizes front-line workers, essential personnel, and troops about to deploy for doses of the coronavirus vaccine. The cadet and midshipmen populations are younger and considered healthier than the rest of the military force and thus viewed as a lower priority for receiving the vaccines, said Lt. Gen. Richard Clark, the superintendent for the Air Force Academy in Colorado.

Buck has told the Navy that he needs most of his students to be vaccinated soon because the students will be sent to operational ships, submarines, and units. Depending on their academic year, students spend between one to two months with Navy and Marine Corps units. The Naval Academy, based in Annapolis, Md., has more than 4,500 students, according to U.S. News and World Report.

“Our Navy has prioritized the operational forces first. They’re getting vaccinated, they have a very safe and healthy bubble,” Buck said. “And for them to be willing to accept our midshipmen from the academy, as well as midshipmen from ROTC universities around the country, we need to vaccinate them prior to the summer training starting.”

The initial group of midshipmen who would begin their training about May 15 need to start their first dose by the last week of March, according to Buck. After that, the rest of the students need to start their vaccinations in the first three weeks of April in order to receive both doses and build up their immunity before they go to their assignments.

Clark and Lt. Gen. Darryl Williams, the superintendent of the U.S. Military Academy at West Point, N.Y., did not say during the hearing whether they were planning to vaccinate their students early due to summer training.