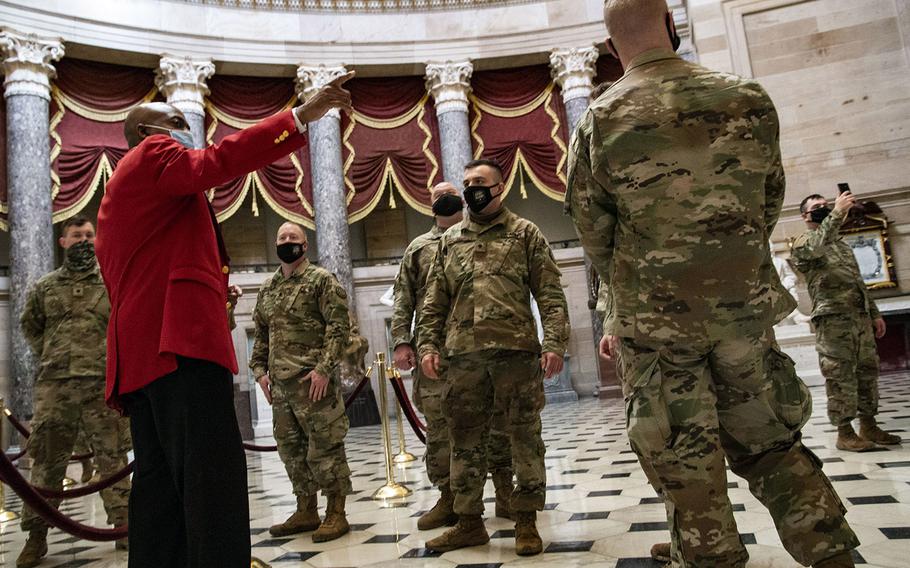 Buy Photo
Off-duty National Guard troops learn about the history of the U.S. Capitol in the building's rotunda on Feb. 4, 2021. (Joe Gromelski/Stars and Stripes)

WASHINGTON — The cost of having National Guard troops protect the area around the U.S. Capitol will cost nearly $500 million, the Pentagon's chief spokesman said Monday.

The expense of hotel rooms for National Guard troops will also be a factor in the final cost, Kirby said.

National Guard troops were rushed into Washington in the days and weeks after Jan. 6, when a mob of former President Donald Trump's supporters overran the U.S. Capitol in an effort to halt lawmakers from certifying President Joe Biden’s election win.

By Jan. 20, the D.C. deployments grew to almost 26,000 Guard troops — including forces from all 50 states, 3 territories and the entire 1,100 D.C. Guard contingent — to bolster local and federal law enforcement efforts to secure the city for Biden’s inauguration.

Deployments through March 15 would keep troops in Washington during the impeachment trial of Trump, which is set to begin Tuesday.

Defense Secretary Lloyd Austin has approved a plan to retain 7,000 National Guard soldiers and airmen in Washington through March 12 and then 5,000 indefinitely beyond that date, Army and National Guard officials have said.

There are now about 6,200 National Guard soldiers and airmen supporting the security mission in Washington, a Guard spokesman said Monday. But the number includes some troops who are scheduled to leave soon.