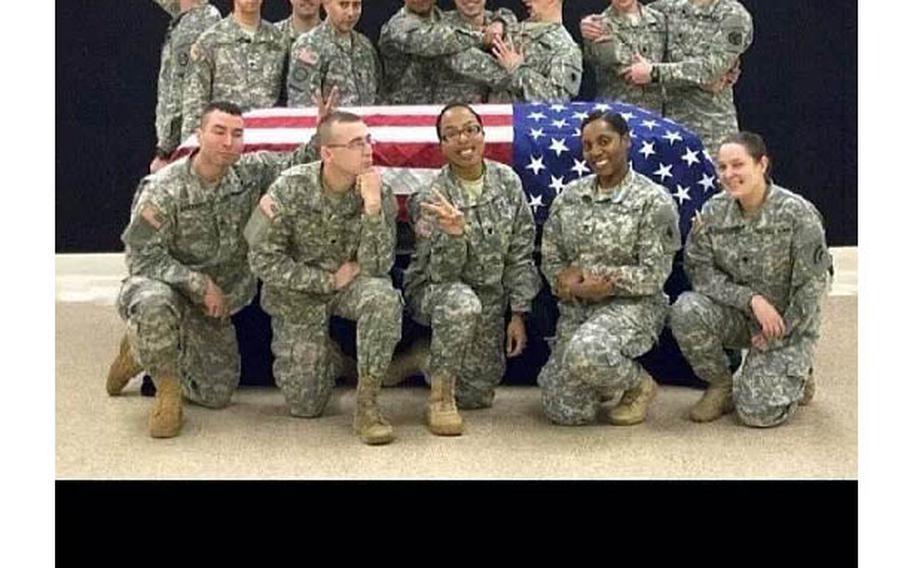 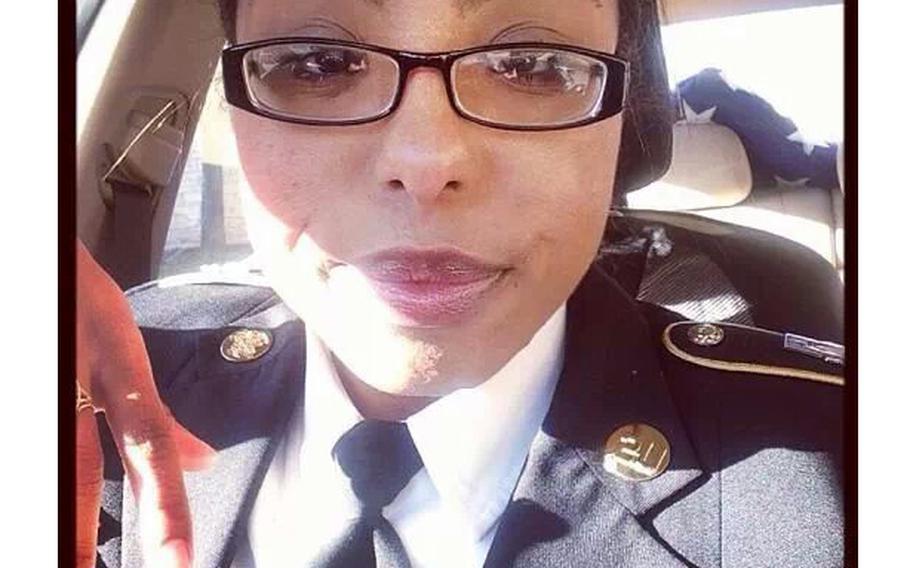 Spc. Terry Harrison, a Wisconsin National Guard member, has been suspended after posting photos of herself and other members of an honor guard clowning around a flag-draped casket. Harrison also posted this photo with a caption suggesting that it was so cold at a military funeral that it would be hard to fold the flag draped over the casket. (Instagram)

The photos and comments appeared on the Instagram page of Spc. Terry Harrison, a member of the Madison, Wis.-based 1st Battalion, 147th Aviation Regiment. Harrison has since been removed from the funeral detail indefinitely, according to the Wisconsin National Guard.

One of the photos shows a group of soldiers in Army Combat Uniforms, some posing disrespectfully around a flag-draped training casket, along with a caption that reads, ‘‘We put the FUN in funeral — your fearless honor guard from various states.” The other photo shows Harrison in a car, and the comment below it reads, “It’s so damn cold out. Why have a funeral outside!? Somebody’s getting a jacked up flag,” suggesting that the family of a fallen servicemember would receive an unprofessionally presented American flag during the ceremony because of the poor weather.

The Wisconsin National Guard described the photos and comments as “distasteful,” and said the organization first became aware of them late Monday. The images have gone viral on social media, and closely follow the discovery of another photo, showing an airman posing disrespectfully with a POW/MIA logo, which created a firestorm on the Internet.

The photos and comments do not portray any misconduct during the performance of actual military funeral honors. The group photo with the training casket was taken at the Professional Education Center, a National Guard training facility in North Little Rock, Ark., the Wisconsin National Guard said.

Mothers of fallen servicemembers took to the Internet to express their outrage over the photos and comments.

“We donated the casket our Lance came home to us in to the [National Guard] to use when they practice. So this is tearing me up,” Tammy Eakes, a mother of National Guard soldier Sgt. Lance Oliver Eakes, who was killed in Iraq in 2008, said in a statement which appeared on the ChicagoNow blog Tuesday. “I hate they have belittled the Guard this way.”

“They do not deserve the honor of serving our country. They certainly don’t have the mindset to carry a flag-covered coffin. I pray their families never have to accept a flag ‘on behalf of the President of the United States’,” Karen Meredith, mother of 1st Lt. Ken Ballard, who was killed in action in Iraq 2004, said in a statement. “We GS (Gold Star) Moms are no wilting flowers. Do NOT disrespect our children, or there will be hell to pay!”

Rickert understands why people are offended, according to the news release.

“The Wisconsin National Guard expects all soldiers who carry out this sacred detail to handle it with professionalism and honor … A military funeral is the final show of respect for our veterans and their families, and we take that solemn duty very seriously,” Rickert said. “The very name ‘military funeral honors’ underscores the importance we ascribe — both as the military and society at large — to such solemn occasions. These photos and comments do not appear to align with those values.”

Maj. Gen. Donald Dunbar, the Wisconsin adjutant general who ordered the investigation, said he was “appalled” by the photos and comments and he finds them “offensive.”

“We expect all of our soldiers and airmen to live by a core set of values, in word and deed,” Dunbar said in the release.

Gen. Frank Grass, the Chief of the National Guard Bureau at the Pentagon, has directed the Army National Guard to conduct its own investigation of the matter, he said in a statement.

“I am confident the Army National Guard will quickly resolve this matter and take swift and appropriate action,” Grass said.

Harrison has received threats via social media and the National Guard has taken measures to ensure her safety, the Wisconsin National Guard said. She could not be reached by Stars and Stripes for comment.