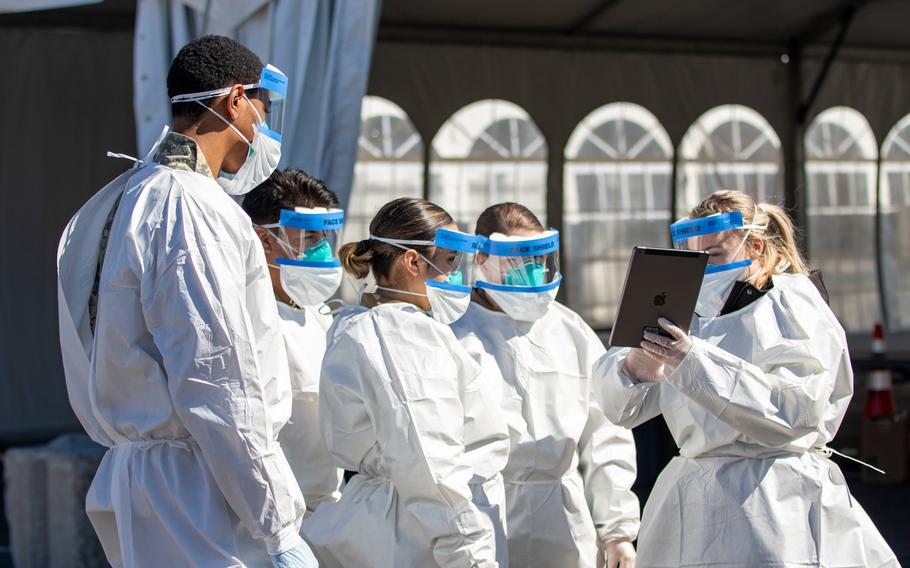 More than 2,000 National Guard members have been deployed as of Wednesday to help combat the spread of coronavirus as Defense Department officials weigh giving those troops federal status, which would put them under the direction of President Donald Trump and on the federal government payroll.

Governors in 23 states have authorized the deployment of National Guard soldiers and airmen to assist rapidly changing efforts to control the virus outbreak as the number of infected Americans across the country topped 7,300.

But no requests for Guard support have been issued by the federal government as of Wednesday, according to a news release from the National Guard Bureau. But that could change as the Trump administration reviews options for military support to help control the spread of the virus.

“We are considering activating National Guard and Reserve units to assist states with planning, logistics and medical support as needed,” Defense Secretary Mark Esper said Tuesday during a news conference. “In my conversations with governors and members of Congress about DOD's resources, I've made it clear that we will continue to support the administration's comprehensive efforts and the country every step of the way, while ensuring our nation's security remains the top priority of the Department of Defense.”

However, Esper clarified he sees a federal deployment of troops as a “last resort.”

“We can come in, rather than being the first, and really help enable through the Guard and Reserve to play that role initially,” he said.

Across the states, troops continue forward with a variety of missions.

In an effort to better protect health care workers, more than 20 National Guard Civil Support Teams, which aid civil authorities with chemical, biological, radiological and nuclear high-yield explosives, have provided training on the appropriate use of personal protective equipment for first responders in 13 states, according to the National Guard Bureau.

Other missions have primarily remained the same since the first troops were called up last week and vary among the states. They include response planners, support to medical-testing facilities, response liaisons and support to state emergency operations centers, support to health care professionals, logistics support, assisting with disinfecting and cleaning common public spaces, providing transportation for health care providers, collecting and delivering samples and assisting with sample administration.

In Maryland, about 1,000 service members were activated this week with another 1,200 on standby, according to a news release from the state’s Guard. Eight of those troops worked with the Maryland Department of Health to get passengers from the Grand Princess cruise ship back home. The people arrived at the Baltimore-Washington International Thurgood Marshall Airport on Tuesday after a quarantine period at Dobbins Air Reserve Base, Ga.

The airmen, all from the 175th Wing, also brought food and essential supplies to allow the passengers to self-quarantine for at least two weeks, according to the release.

“This is just another example of Marylanders helping their fellow Marylanders throughout this crisis situation,” Army Maj. Gen. Timothy E. Gowen, the adjutant general for Maryland, said in a statement. “The Maryland National Guard is here to help our neighbors wherever and however we can.”

“Aside from our Guardsmen already responding, we are continuing to lean forward and plan for possible follow-on missions that we may be called upon to perform,” Brig. Gen. D. Keith Waddell, adjutant general of the state Guard, said in a statement. “As our missions develop and increase, today’s preparations will lead to tomorrow’s success.”

The activated troops join about 40 National Guard cyber experts who are on active-duty to assist with cyber security of election networks, he said.

The New York National Guard has upped its number of troops from about 300 to 900, working most visibly in New Rochelle, a New York City suburb, where personnel continue the delivery of school lunches and breakfasts to neighborhood community centers and cleaning of public buildings, said Col. Richard Goldenberg, spokesman for New York National Guard. Joint Task Force headquarters have been stood up on Long Island, in New York City, the Hudson Valley and the Albany area.

Warehouse operations at Camp Smith Training Site in Cortlandt are helping distribute hand sanitizer across the Hudson Valley area, Goldenberg said. Logistics and medical experts are working with the New York State Department of Health to identify facilities and spaces that can be converted into temporary hospital space.