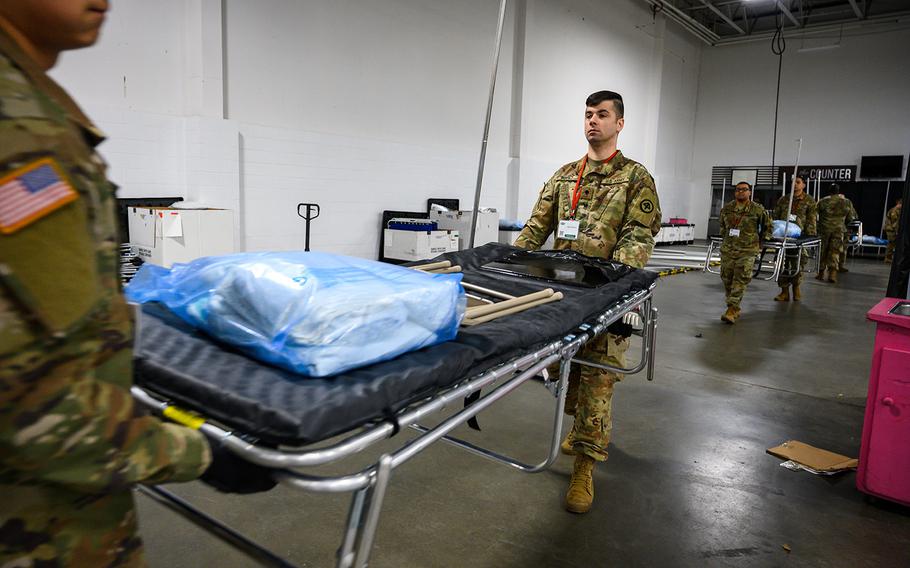 Roughly 17,250 National Guard troops are deployed across the country and granting them federal status gives them the same benefits as active-duty service members during their deployments to help subdue the virus outbreak that has killed more than 4,450 Americans.

Another 27 states are working through the approval process for federal status for Guard troops, which involves clearing missions through the Federal Emergency Management Agency.

Troops are working in all 50 states with missions ranging from supporting virus test sites to establishing medical facilities to staffing checkpoints along highways.

Troops on federal funding status, known at Title 32, are eligible for Tricare health insurance and can use military medical facilities should they become ill or injured while on duty. These are some of the reasons used by governors, lawmakers and National Guard advocacy groups pushing for all troops deployed in response to the coronavirus pandemic to receive the federal status.

As of Monday, 79 Guard members had tested positive for the virus, Cunningham said. It was unclear Wednesday how many of those troops were infected during their deployments. One member of the New Jersey National Guard, who was not activated for duty, died from the virus Saturday.

With more than 600 soldiers and airmen activated, Rhode Island Guard members are working at coronavirus test sites as well as supporting the state’s effort to have anyone traveling to Rhode Island from out of state to self-quarantine for 14 days, Pineault said.

About 15 military police are at two checkpoints along state borders with officers from the Rhode Island State Police. Officers have any out-of-state vehicles pull into a rest area where National Guard troops help collect information about the traveler and share details of how to self-quarantine, he said. Collected information is given to the state’s health department, which sends daily text messages to check on those people.

“These missions will support the governor's recent travel ban guidance in an attempt to significantly reduce the number of infected individuals entering the state from areas with a high amount of community spread,” Coleman said in a statement.