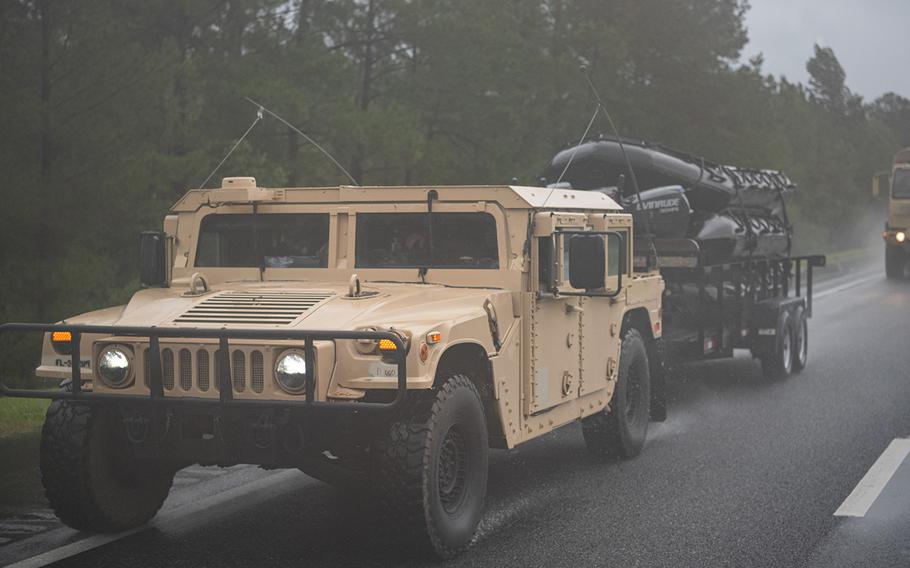 Army Guard soldiers with high-water vehicles were working with local firefighters in hard-hit areas around Pensacola on Wednesday as the slow-moving storm crept inland toward Georgia, said Air Force Lt. Col. Caitlin Brown, a spokeswoman for the Florida Guard. Once the rains subside, Brown said she expected Guard troops to be tasked with other missions including route clearance and supply delivery.

“We’re focused now only on missions that are life-saving,” she said Wednesday. “We’re going to be there as long as we’re needed, and we expect that our mission may shift depending on the extent of the damage, the impact of the storm.”

Western Florida took the brunt of the storm, which made landfall early Wednesday morning as a Category 2 storm near Gulfport, Ala., and moved across the Florida Panhandle at some 3 mph, dumping rain for hours. Officials at Naval Air Station Pensacola reported power outages and some flooding on the base, but they did not have any damage assessment on Wednesday.

The National Weather Service said more than 2 feet of rain had fallen in the areas around the naval air station. It also reported nearly 3 feet of water on the streets of downtown Pensacola. Meteorologists attributed the mounting rainfall totals to the unusually slow pace of the storm as it moved from the Gulf of Mexico onto land. They warned flooding to grow worse in the coming days for areas impacted by the storm.

“When it is safe to do so, we will begin reconnaissance and assessments in Mobile and Baldwin counties, evaluating the situation on the ground,” Whitt said Wednesday afternoon. “We are standing by to support the overall Hurricane Sally response as requested by the Alabama Emergency Management Agency.”

National Guard troops in neighboring Mississippi who had staged to respond to the hurricane are also poised to help respond in Alabama, if needed, a spokeswoman for the Mississippi Guard said Wednesday. The troops had prepared to respond in their home state but were ordered to stand down early Wednesday afternoon after Mississippi was spared the worst of Hurricane Sally.

Coast Guard helicopters on Wednesday flew search-and-rescue overflights to look for signs of people in distress following the storm. The service said the flights would continue, but it did not report any rescues on Wednesday.