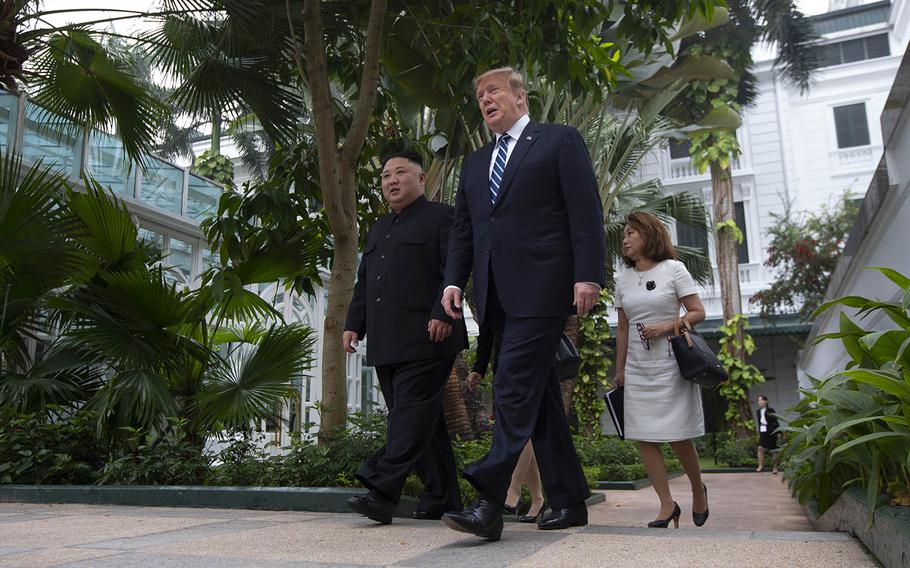 The 35-year-old, third-generation ruler has answered questions from foreign reporters in what’s believed to be a first. His state-run media broadcast his whereabouts with uncharacteristic speed and detail. And he arrived in the Vietnamese capital Tuesday with most of his senior aides, including his powerful sister, Kim Yo Jong, in tow.

It’s all part of an image makeover aimed at projecting Kim as an international statesman, which began with a new engagement with the United States last year, experts said.

“He is getting more comfortable with being in the limelight and has done a number of things over the past year to appear more like other leaders,” said Jenny Town, a research analyst at the Washington, D.C.-based Stimson Center.

“Things like bringing his wife on state visits; changing the set/design of his new year’s address; more real time or only short delay of domestic media coverage, these are all parts of an evolving public image,” she added.

North Korean media have traditionally reported on the leader’s whereabouts days after the fact, but the Korean Central News Agency has publicized the two-day summit that began Wednesday. “The historic second meeting of the top leaders of the two countries began at 18:30, February 27, local time, followed by one-on-one chat and dinner,” the Korean Central News Agency reported hours after it occurred.

“Sincere and deep opinions were exchanged with a view to making comprehensive and epoch-making results in the talks in order to meet the interest and expectation of the whole world for the successful Hanoi summit,” KCNA said.

North Korea’s main newspaper also was plastered with photos of Kim’s trip abroad, starting with his 60-plus-hour train ride from Pyongyang to Vietnam, via China.

That reflects a confidence in Kim’s leadership after years of carefully orchestrated efforts to consolidate power, said Michael Madden, who runs a blog that tracks North Korea’s leadership.

“If they didn’t have confidence in political control mechanisms then they wouldn’t be publishing his whereabouts in real time,” Madden said Thursday in a telephone interview. “It’s a sign that he’s confident of the structure in place while he’s out of the country.”

Kim was younger than 30 when he assumed control of the isolated country after his father, Kim Jong Il, died of a heart attack in 2011. He rarely appeared in public over the next several years as he moved to eliminate any challenge to his power with executions and purges. In another first, Kim answered questions for foreign reporters during his talks with Trump, vowing to make the summit a success and reiterating his commitment to denuclearize.

But one topic apparently remained off-limits - human rights. When a reporter asked Kim if he would discuss the issue, Trump responded by saying, “We’re discussing everything.”

The young leader also brought most of his senior aides with him to Hanoi, raising the question of who’s minding the store at home. “He had to get his own internal house in order,” said Madden, director of North Korea Leadership Watch and a contributor to the website 38 North. “His internal position is as consolidated as it possibly can be.” Madden said influential members of the ruling Workers’ Party and other lower-level officials remained in the country to keep the day-to-day operations running.

His grandfather and the country’s founder, Kim Il Sung, gave interviews to the New York Times and others, but Kim Jong Un’s willingness to engage spontaneously with foreign media “is taking it to a new level,” John Delury, an associate professor at Yonsei University in Seoul, tweeted.

“Implications for North Korea are momentous - moving away from the totalitarian aspirations of perfect order and control, toward a more open, spontaneous, ‘imperfect’ place,” he wrote.